This website requires the use of Javascript to function correctly. Performance and usage will suffer if it remains disabled.
How to Enable Javascript
As World Watches Russia, Myanmar Army Steps Up Attacks 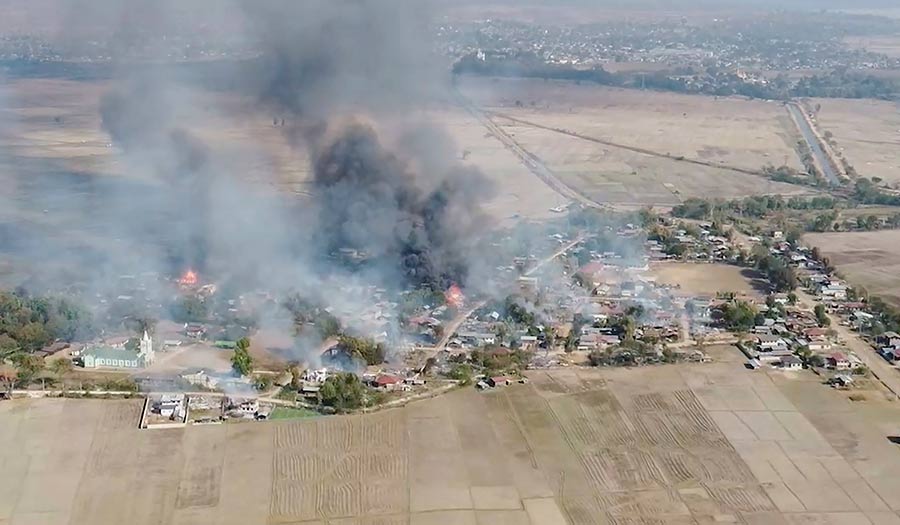 BANGKOK (AP) – While Russia’s war in Ukraine dominates global attention, Myanmar’s military is targeting civilians in air and ground attacks on a scale unmatched in the country since World War II, according to a longtime relief worker who spent almost three months in a combat zone in the Southeast Asian nation.

David Eubank, director of the Free Burma Rangers, a humanitarian relief organization, told The Associated Press that the military’s jets and helicopters stage frequent attacks in the areas of eastern Myanmar where he and his volunteers operate, bringing medical and food aid to civilians caught in conflict.

Ground forces are also firing artillery—indiscriminately, he said—causing thousands to flee their homes.

Many are loosely allied with well-established ethnic minority armed groups—such as the Karenni, the Karen and the Kachin—that have been fighting the central government for more than half a century, seeking greater autonomy in the frontier regions.

Despite overwhelming superiority in numbers and weaponry, the military has failed to crush this grassroots resistance movement. The army has now stepped up attacks, taking advantage of the dry, summer conditions.

Mr. Eubank described the fighting he had seen as probably the worst in Myanmar since World War II, when the country was a British colony still known as Burma and largely occupied by the Japanese.

There has been serious but sporadic fighting in Kachin State in northern Myanmar for a few years, he said, “but what I saw in Karenni I had not seen in Burma before.”

Russia is a top arms supplier to Myanmar’s military, keeping up supplies even as many other nations have maintained an embargo since the army’s takeover to promote peace and a return to democratic rule.

Mr. Eubank was a U.S. Army Special Forces and Ranger officer before he and some ethnic minority leaders from Myanmar founded the faith-based Free Burma Rangers in 1997. Two of its members have been killed in Kayah state since late February: one in an air strike, the other in a mortar barrage.