This website requires the use of Javascript to function correctly. Performance and usage will suffer if it remains disabled.
How to Enable Javascript
Russia’s War in Ukraine after One Week—Cities Besieged as Refugees Flee 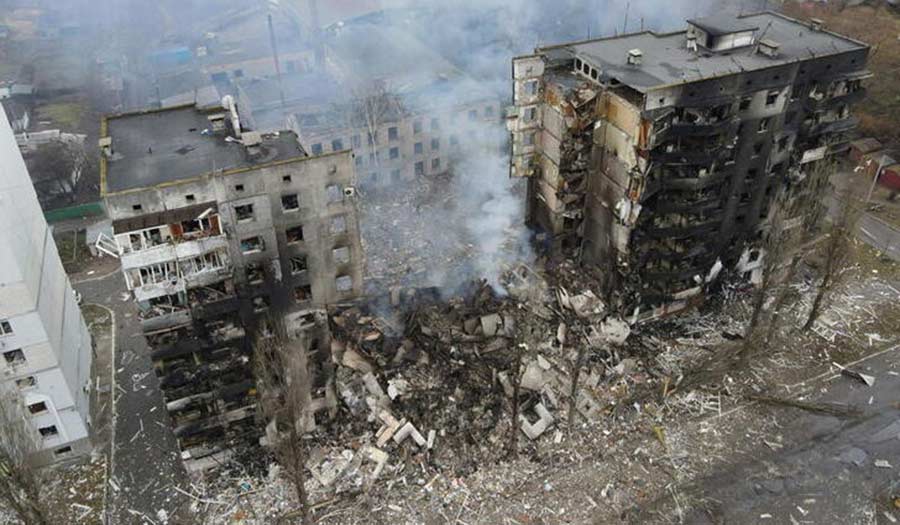 Reuters/Maksim Levin
An aerial view shows a residential building destroyed by shelling in the settlement of Borodyanka in the Kyiv region, Ukraine (March 3, 2022).

The humanitarian crisis also worsened, with more than one million refugees now having fled Ukraine, the United Nations said.

Hundreds of Russian soldiers and Ukrainian civilians have been killed since President Vladimir Putin sent his troops over the border last Thursday. Russia itself has been plunged into isolation never before experienced by an economy of such size.

Despite an initial battle plan that Western countries said was aimed at swiftly toppling the Kyiv government, Russia has captured only one Ukrainian city so far—the southern Dnipro River port of Kherson, which its tanks entered on Wednesday.

Russia has shifted tactics, escalating its bombardment of major cities. Swathes of central Kharkiv, a city of 1.5 million people, have been blasted into rubble.

Mariupol, the main port of eastern Ukraine, has been surrounded under heavy bombardment, with no water or power. Officials say they cannot evacuate the wounded. The city council compared the situation to the World War II siege of Leningrad.

A second round of peace talks between Ukrainian and Russian delegations was due to begin in Belarus Thursday, Ukrainian negotiator Davyd Arakhamia said.

Kyiv plans to open by discussing humanitarian corridors. A first round of talks on Monday led to no breakthroughs.

Ukraine’s President Volodymyr Zelenskiy has stayed in Kyiv, releasing regular video updates to the nation. In his latest message, he said Ukrainian lines were holding. “We have nothing to lose but our own freedom,” he said.

Britain’s defense ministry said the main body of the huge Russian column advancing on Kyiv was still 30 km from the city center, delayed by Ukrainian resistance, mechanical breakdown and congestion.

“The column has made little discernible progress in over three days. Despite heavy Russian shelling, the cities of Kharkiv, Chernihiv and Mariupol remain in Ukrainian hands,” it said in an intelligence update.

In Borodyanka, a small town 40 miles northwest of Kyiv where locals had repelled a Russian assault, burnt out hulks of destroyed Russian armor were scattered on a highway, surrounded by buildings blasted into ruins. Flames from one burning apartment building lit up the pre-dawn sky.

“They started shooting from their APC towards the park in front of the post office,” a man recounted in the apartment where he was sheltering with his family, referring to a Russian armored personnel carrier.

“Then [they] started the tank and started shooting into the supermarket which was already burned. It caught fire again.

Russian Foreign Minister Sergei Lavrov characterized the Western response to Russia’s actions as “hysteria,” which he said would pass.

Only Belarus, Eritrea, Syria and North Korea voted with Russia against an emergency resolution at the United Nations General Assembly condemning Moscow’s “aggression.”

In Beijing, organizers sent Russian and Belarusian athletes home from the Paralympic Games, saying Moscow and Minsk were to blame for violating the Olympic Truce. Russia called the ban “monstrous.”

In Russia itself, where nearly all major opposition figures have been jailed or exiled in a crackdown over the past year, the authorities have banned reporting that describes the “special military operation” launched by Putin on February 24 as an “invasion” or “war.”

TASS reported on Thursday that Ekho Moskvy radio, the best-known independent broadcaster of the post-Soviet era, would be shut down. Anti-war demonstrations have been quickly squelched by police who have arrested thousands of people.

Riot police snatched protesters off the streets in St Petersburg late on Wednesday, including a 77-year-old woman filmed being muscled away by men in black helmets. Activists distributed footage of a small girl weeping behind bars, having been arrested for holding up a sign that says “No war.”

An EU official said the bloc saw signs Russia might impose martial law: “As is the tragic loss of young lives killed in the military conflict, with Russian mothers having to learn about the loss of their sons. So it is something we’re conscious of. And it’s something we’re worried about,” the official said.

Filippo Grandi, U.N. High Commissioner for Refugees, said the million refugees uprooted in seven days was one of the fastest exoduses he had seen in more than 40 years of emergency work. “Hour by hour, minute by minute, more people are fleeing the terrifying reality of violence.”