This website requires the use of Javascript to function correctly. Performance and usage will suffer if it remains disabled.
How to Enable Javascript
Ukraine Invasion: What to Know as Russian Forces Target Kyiv

Ukraine Invasion: What to Know as Russian Forces Target Kyiv 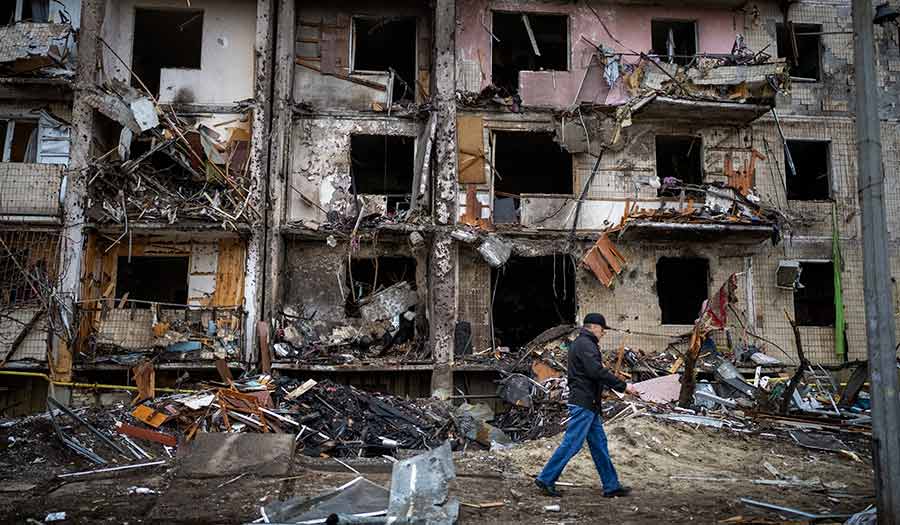 NICOSIA, Cyprus (AP) – Invading Russian forces closed in on the Ukrainian capital Friday, in what appears to be an encircling movement after a barrage of airstrikes on cities and military bases around the country.

The advance on Kyiv is seen as an attempt to replace Ukrainian President Volodymyr Zelenskyy with a Kremlin-friendly regime.

Pre-dawn explosions rocked Kyiv and gunfire was reported in parts of the city, while Ukraine’s military said a group of Russian spies and saboteurs was seen on the capital’s outskirts. Police told people not to exit a central subway station because of gunfire in the area.

The assault, anticipated for weeks by the West, amounts to Europe’s largest ground conflict since World War II. It could also portend the emergence of a new “Iron Curtain” between the West and Russia, with global repercussions.

Mr. Zelenskyy appealed for defense assistance and tougher sanctions on Russia. U.S. President Joe Biden was to meet Friday with fellow NATO leaders in a virtual summit on Ukraine.

Here are the things to know about the conflict and the security crisis in former Soviet-dominated Eastern Europe.

The Ukrainian president made another push for a diplomatic end to the fighting by offering to discuss with Russia the possibility of designating Ukraine a non-aligned country.

The Kremlin said it would analyze the offer even as Russian troops continued their offensive on Kyiv. Western nations had rejected Moscow’s demand for a halt to Ukraine’s bid to join NATO over fears that the alliance would pose a risk to Russia’s security. It was that rejection that Russian President Vladimir Putin used to justify the invasion, claiming that the West left him no other choice.

Kremlin spokesman Dmitry Peskov described Mr. Zelenskyy’s offer as “a move in a positive direction” which the Russian government had taken note of and now needed to “analyze.”

But Russian Foreign Minister Sergey Lavrov said Mr. Zelenskyy “is simply lying” about his offer because he “missed the opportunity” to discuss Ukraine’s neutral status when Putin proposed it earlier.

As they awakened on the second day of Russia’s invasion, horrified civilians found themselves at risk as artillery shells rained down on some residential buildings on Kyiv’s outskirts.

Among them was Yurii Zhyhanov, who woke to his mother’s screaming and found himself covered in dust after shelling struck his residential building.

Like many other Kiyv residents, Mr. Zhyhanov and his family packed and fled the beleaguered capital.

Russia has said it is not targeting cities, but the fighting would seem to belie that. The body of a soldier lay on the ground near a Kyiv underpass. Elsewhere, fragments of a downed aircraft were strewn amid a residential area’s brick homes with black plastic covering body parts found nearby.

In the port city of Mariupol, a young girl named Vlada said she wanted “all this to end as soon as possible.”

Ravina Shamdasani, a spokeswoman for the U.N. High Commissioner for Human Rights, says its staffers have so far verified at least 127 civilian casualties—25 killed and 102 injured—mostly from shelling and airstrikes.

A spokeswoman for the UN refugee agency, Shabia Mantoo, said more than 100,000 people were believed to have left their homes in Ukraine and that “up to 4 million people may flee to other countries if the situation escalates.”

Reviving Cold War fears of a nuclear showdown, Russian President Vladimir Putin has warned in a speech that he has the weapons available if anyone dares to use military means to try to stop his takeover of Ukraine.

Whether an empty threat or not, Mr. Putin’s words re-animated the specter of nuclear war—through accident or miscalculation.

The Russian president said in a speech early Thursday that despite “losing a considerable part of its capabilities after the fall of the Soviet Union,” Russia remains “one of the most powerful nuclear states” and has “a certain advantage in several cutting-edge weapons.”

Mr. Putin’s mere reference to nuclear weapons has sent a jolt through the West about the possibility that the fighting in Ukraine might lead to a Russia-U.S. nuclear confrontation.

Turning the Financial Screws on Russia

The West has taken a military option in Ukraine off the table, but world leaders—with the exception of Moscow ally China—are preparing measures aimed at hurting the Russian economy and its leaders, including President Putin’s inner circle.

French Finance Minister Bruno Le Maire said Friday that France and its European allies are determined to inflict great damage on the Russian economy and punish Russia for the “foolish decisions of Vladimir Putin.”

Mr. Le Maire said the EU wants to “cut all ties between Russia and the global financial system.”

French President Emmanuel Macron said his country and its allies have decided to further sanction individuals, as well as impose penalties targeting finance, energy and other sectors. The final texts for the sanctions will be submitted for approval to EU foreign ministers later Friday.

Mr. Macron also said the EU has decided on an “unprecedented” 1.5 billion euros ($1.68 billion) in economic aid for Ukraine.

Asian and Pacific countries have joined the West in taking punitive measures against Russia, including export controls aimed at starving its industries and military of semiconductors and other high-tech products.

In retaliation to a British ban on Aeroflot flights, Russia’s civil aviation authority forbade UK flights to and over Russia starting Friday.