This website requires the use of Javascript to function correctly. Performance and usage will suffer if it remains disabled.
How to Enable Javascript
Olaf Scholz Replaces Angela Merkel as German Chancellor, Opening New Era

Mr. Scholz’s government takes office with high hopes of modernizing Germany and combating climate change but faces the immediate challenge of handling the country’s toughest phase yet of the coronavirus pandemic.

Lawmakers voted 395-303 with six abstentions to elect Mr. Scholz—a comfortable majority, though short of the 416 seats his three-party coalition holds in the 736-seat lower house of parliament. Ms. Merkel, who is no longer a member of parliament, looked on from the spectators’ gallery as parliament voted. Lawmakers gave her a standing ovation.

Mr. Scholz, 63, who had been Germany’s vice chancellor and finance minister since 2018, brings a wealth of experience and discipline to an untried coalition of his center-left Social Democrats, the environmentalist Greens and the pro-business Free Democrats. The three parties are portraying the combination of former rivals as a progressive alliance that will bring new energy to the country after Ms. Merkel’s near-record time in office.

“We are venturing a new departure, one that takes up the major challenges of this decade and well beyond that,” Mr. Scholz said this week. If the parties succeed, he added, “that is a mandate to be reelected together at the next election.”

Mr. Scholz, an unflappable and supremely self-confident figure who has displayed an ability to put aside setbacks quickly, cracked a smile as he was elected and formally appointed by President Frank-Walter Steinmeier.

The new chancellor then returned to parliament to be sworn in. Mr. Scholz, who has no religious affiliation, omitted the optional phrase “so help me God” from his oath of office, as did Ms. Merkel’s predecessor, Gerhard Schroeder.

Ms. Merkel wished Mr. Scholz luck at a handover ceremony at the chancellery. “Take possession of this house and work with it for the good of our country,” she said. Mr. Scholz thanked Ms. Merkel for her work, telling her “you made your mark on this country.”

Ms. Merkel has said she will not seek another political role and did not mention any future plans on Wednesday. The 67-year-old said earlier this year that she will take time to read and sleep “and then let’s see where I show up.”

Mr. Scholz’s style has often been likened to Ms. Merkel’s, although they are from different parties. Neither is given to public displays of emotion or rousing speeches. The former labor minister and Hamburg mayor has portrayed himself both as her natural successor and an agent of change.

Mr. Scholz quipped Wednesday that he will stick with Ms. Merkel’s “northeast German mentality” and “not so much will change on that front.”

The new government aims to step up efforts against climate change by expanding the use of renewable energy and bringing Germany’s exit from coal-fired power forward from 2038, “ideally” to 2030. It also wants to do more to modernize the country of 83 million people, including improving its notoriously poor cellphone and internet networks.

It also plans more liberal social policies, including legalizing the sale of cannabis for recreational purposes and easing the path to German citizenship while pledging greater efforts to deport immigrants who do not win asylum.

The government also plans to increase Germany’s minimum wage and to get hundreds of thousands of new apartments built to curb rising rental prices.

Mr. Scholz has signaled continuity in foreign policy, saying the government will stand up for a strong European Union and nurture the trans-Atlantic alliance. He makes his first trip abroad to Paris on Friday, maintaining a tradition for German chancellors, travel to Brussels the same day to meet EU and NATO leaders.

His three-party alliance brings both opportunities and risks for all the participants, perhaps most of all for the Greens. After 16 years in opposition, they will have to prove that they can achieve their overarching aim of cutting greenhouse gas emissions while working with partners who may have other priorities.

Green co-leader Robert Habeck is Mr. Scholz’s vice chancellor, heading a revamped economy and climate ministry. The government’s No. 3 official is Christian Lindner, the finance minister and leader of the Free Democrats, who insisted that the coalition reject tax hikes.

“It won’t be easy to keep three different parties together,” Mr. Schroeder, who led Germany from 1998 to 2005 as the country’s last center-left chancellor, told Phoenix television. “But I think Olaf Scholz has the patience, but also the determination, to manage it.”

German federal and state leaders last week announced tough new restrictions that largely target unvaccinated people. In a longer-term move, parliament will consider a general vaccine mandate. Germany has seen daily COVID-19 infections rise to record levels this fall, though they may now be stabilizing, and hospitals are feeling the strain.

“People are hoping that you…will show leadership and take the right measures,” President Steinmeier told the new Cabinet. “What matters is not listening to the loudest, but ensuring that the pandemic doesn’t keep us firmly in its grip for another year and that public life can once again become a matter of course.” 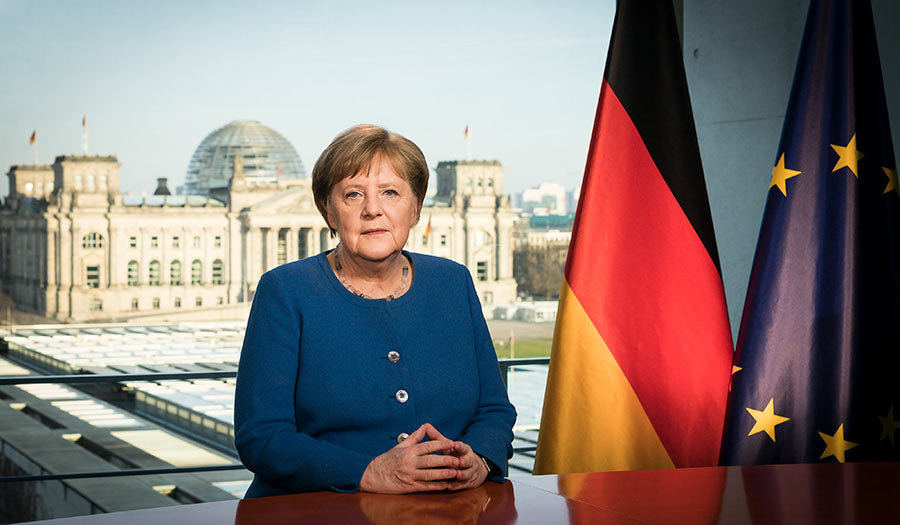