This website requires the use of Javascript to function correctly. Performance and usage will suffer if it remains disabled.
How to Enable Javascript
First Water Cuts in U.S. West Supply to Hammer Arizona Farmers 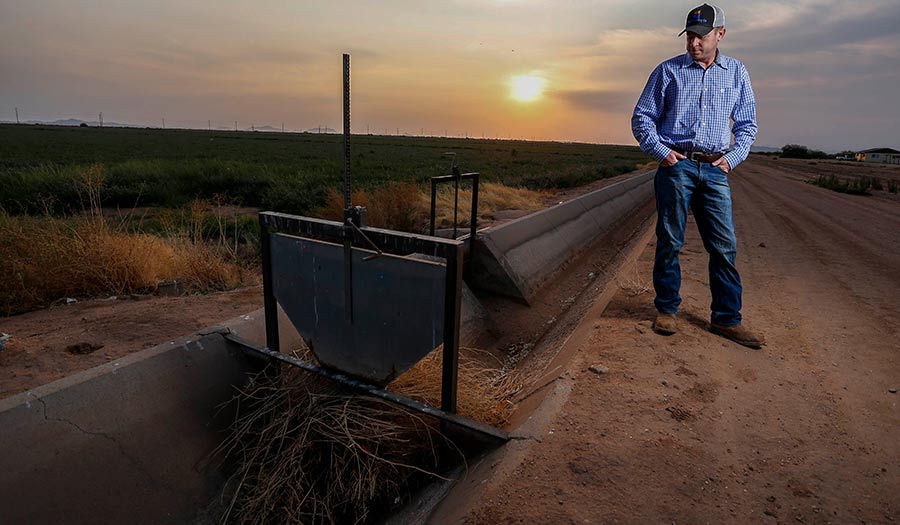 AP/Darryl Webb
Will Thelander, a partner in his family’s farming business, looks into a dry irrigation canal on his property (July 22, 2021).

CASA GRANDE, Arizona (AP) – A harvester rumbles through the fields in the early morning light, mowing down rows of corn and chopping up ears, husks and stalks into mulch for feed at a local dairy.

The cows will not get their salad next year, at least not from this farm. There will not be enough water to plant the corn crop.

Drought and high demand are expected to force the first-ever mandatory cuts to a water supply that 40 million people across the American West depend on—the Colorado River. The U.S. Bureau of Reclamation’s projection next week will spare cities and tribes but hit Arizona farmers hard.

They knew this was coming. They have left fields unplanted, laser leveled the land, lined canals, installed drip irrigation, experimented with drought-resistant crops and found other ways to use water more efficiently.

Still, the cutbacks in Colorado River supply next year will be a blow for agriculture in Pinal County, Arizona’s top producer of cotton, barley and livestock. Dairies largely rely on local farms for feed and will have to search farther out for supply, and the local economy will take a hit.

The cuts are coming earlier than expected as a drought has intensified and reservoirs dipped to historic lows across the West.

Standing next to a dry field, his boots kicking up dust, farmer Will Thelander said “more and more of the farm is going to look like this next year because we won’t have the water to keep things growing everywhere we want.”

His father, Dan, tried to steer his kids away from farming, not because water would be scarce but because development was expected to swallow farms between Phoenix and Tucson where their family grows alfalfa, corn for cows, and cotton, some destined for overseas markets.

“It was fun just keeping the family business going, working with my dad,” said Mr. Thelander, a 34-year-old, fourth-generation farmer whose office is a dusty pickup truck.

Thelander manages almost half of the 6,000 acres his family farms under Tempe Farming Co., much of it devoted to corn for cows. He is not planning on growing that crop next year, opting for others that will be more profitable on less land.

He did not plant anything on 400 acres this year to cut down on water use. Farmers’ Colorado River water comes by way of Lake Mead, which sits on the Arizona-Nevada border and serves as a barometer for water deliveries to Arizona, Nevada, California and Mexico, in the river’s lower basin.

The nation’s largest reservoir already has hit the level that triggers mandatory shortages—1,075 feet above sea level. The Bureau of Reclamation will issue the official projection for 2022 water deliveries Monday, giving users time to plan for what’s to come.

Arizona is expected to lose 512,000 acre-feet of water, about one-fifth of the state’s Colorado River supply but less than 8 percent of its total water. Nevada will lose 21,000 acre-feet, and Mexico will lose 80,000 acre-feet. An acre-foot is enough water to supply one to two households a year.

The cuts will be most deeply felt in Arizona, which entered into an agreement in 1968 for junior rights to Colorado River water in exchange for U.S. funding to build a 336-mile canal to send the water through the desert to major cities.

Agriculture will not end in Pinal County, but the cuts to farmers will force more of them to rely on groundwater that is already overpumped.

Hardly anyone expects a more than 20-year megadrought to improve. The Colorado River, which carries melted snow from the Rocky Mountains and other tributaries through seven Western states, providing drinking water, nourishment for crops and habitat for plants and animals, is expected to shrink. Lake Mead and Lake Powell, the river’s two largest reservoirs, are popular for recreation and their dams produce hydropower for the region.

“It’s such a significant river,” said Sarah Porter, director of the Kyl Center for Water Policy at Arizona State University. “It used to be called the Nile of the West, which is almost impossible to believe these days.”

Arizona has positioned itself to weather the cuts by storing water underground and in Lake Mead and through conservation. It is also trying to secure other water sources. Among the options are importing groundwater to metropolitan Phoenix and Tucson from other parts of the state, leasing more water from tribes, creating a more robust supply of recycled water and desalinating water from the Sea of Cortez in Mexico.

Under a drought contingency plan that Western states signed in 2019, some of the water that farmers will lose will be replaced by other sources next year. Arizona, the Central Arizona Project, environmental groups and others have kicked in millions of dollars to soften the blow to farmers and improve groundwater infrastructure.

The Maricopa-Stanfield Irrigation and Drainage District, where Thelander farms, plans to have nine wells complete by year’s end.

District President Bryan Hartman said it will not pump anywhere near what it used to and will be looking for other sources, likely turning to cities and tribes with higher priority water rights.

The next few months will be critical to planning for a future with less water.

“Growers will be asking, ‘How much water are we going to get, how many acre-feet, what are the flows going to be,’ and that will determine the cropping pattern,” said Mr. Hartman, himself a farmer. 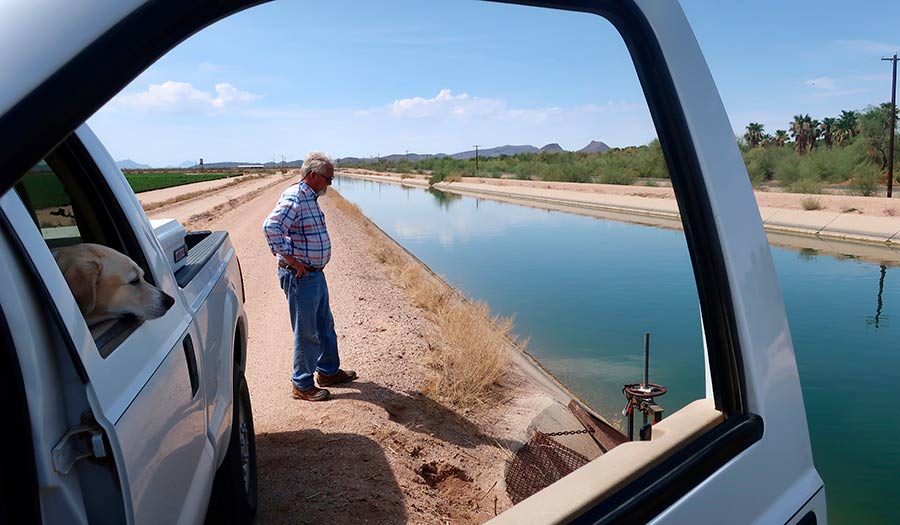 He thought he was done with farming back in 2005 when he sold his land, partly because he knew water would be hard to get.

“I just finally woke up one day and thought, the secretary of the Interior one day is going to say, ‘It’s more important for you to flush your toilet and have water to brush your teeth with than farm,’” Mr. Ollerton said.

Too young to retire, he leased back the land and has farmed across Pinal County.

One of his farms along a stretch of interstate leading to San Diego uses drip irrigation that makes water use more efficient and crops more productive, he said. Making the rounds in his cotton fields, he flushes the system’s valves with Aggie, a yellow lab who rides in the backseat of his pickup truck.

His two children talk about being farmers, but he does not promote the long hours or uncertainty. Three generations of farming likely ends with him.

For Mr. Thelander, he has considered getting out of farming and starting a trucking business. But he also sees hope in guayule, a drought-resistant shrub that could be used in the production of rubber. His family’s farm is participating in research for a tire manufacturer to see if it can be used on a large scale.

“This is my Hail Mary, trying to save farming for myself,” Mr. Thelander said.