This website requires the use of Javascript to function correctly. Performance and usage will suffer if it remains disabled.
How to Enable Javascript
Iran Insists It Can Enrich Uranium to 90 Percent Purity—Weapons Grade—If Needed 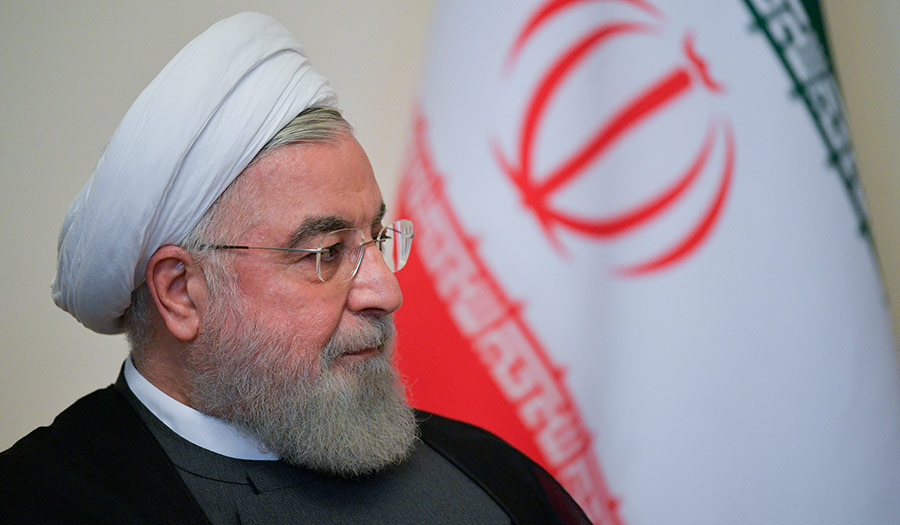 Sputnik/Alexei Druzhinin/Kremlin via Reuters
Iranian President Hassan Rouhani attends a meeting with Russian President Vladimir Putin on the sidelines of a session of the Supreme Eurasian Economic Council in Yerevan, Armenia (Oct. 1, 2019).

DUBAI (Reuters) – Iran said on Wednesday it could enrich uranium up to 90 percent purity—weapons grade—if its nuclear reactors needed it, but added it still sought the revival of a 2015 deal that would limit its atomic program in return for a lifting of sanctions.

President Hassan Rouhani’s remark is his second such public comment this year about 90 percent enrichment—a level suitable for a nuclear bomb—underlining Iran’s resolve to keep breaching the deal in the absence of any accord to revive it.

The nuclear deal caps the fissile purity to which Tehran can refine uranium at 3.67 percent, well under the 20 percent achieved before the pact and far below the 90 percent suitable for a nuclear weapon.

Iran has been breaching the deal in several ways after the United States withdrew from the agreement in 2018, including by producing 20 percent and 60 percent enriched uranium.

Mr. Rouhani, who will hand over the presidency to hardline cleric Ebrahim Raisi on August 5, implicitly criticized Iran’s top decision makers for “not allowing” his government to reinstate the nuclear deal during its term in office.

“They took away the opportunity to reach an agreement from this government. We deeply regret missing this opportunity,” the state news agency IRNA quoted Mr. Rouhani as saying.

Supreme Leader Ayatollah Ali Khamenei, not the president, has the last say on all state matters such as nuclear policy.

Like Mr. Khamenei, Mr. Raisi has backed indirect talks between Tehran and Washington aimed at bringing back the arch foes into full compliance with the accord. Former U.S. President Donald Trump quit the deal three years ago, saying it was biased in favor of Iran, and reimposed crippling sanctions on Tehran.

The sixth round of nuclear talks in Vienna adjourned on June 20. The next round of the talks has yet to be scheduled, and Iranian and Western officials have said that significant gaps still remain to be resolved.

Two senior Iranian officials told Reuters that president-elect Raisi planned to adopt “a harder line” in the talks after taking office, adding that the next round might resume in late September or early October.

One of the officials said many members of Iran’s nuclear team might be replaced with hardline officials, but top nuclear negotiator Abbas Araqchi would stay “at least for a while.”

The second official said Mr. Raisi planned to show “less flexibility and demand more concessions” from Washington such as keeping a chain of advanced uranium enrichment centrifuges in place and insisting on the removal of human rights and terrorism related U.S. sanctions.

Removing oil and financial sanctions is essential if Iran is to export its oil, the top prize for Tehran for complying with the nuclear agreement and reining in its atomic program.