This website requires the use of Javascript to function correctly. Performance and usage will suffer if it remains disabled.
How to Enable Javascript
Protests Erupt After Police Shoot Black Man in Minneapolis Traffic Stop 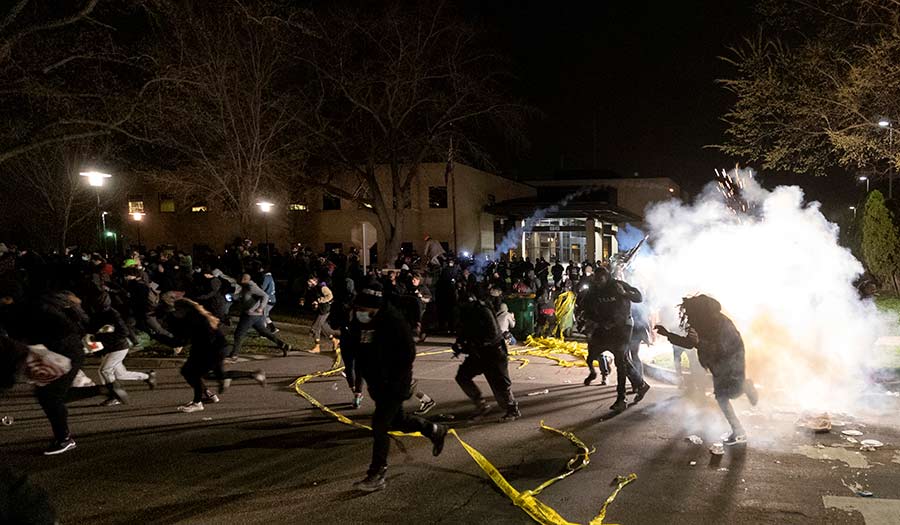 Carlos Gonzalez/Star Tribune via AP
People run as police attempt to disperse the crowd at the Brooklyn Center Police Department in Minnesota (April 11, 2021).

Police fired tear gas and rubber bullets as angry protests erupted in a Minneapolis suburb after a 20-year-old black man was shot dead during a traffic stop.

The police officer who fatally shot the black man apparently intended to fire a Taser, not a handgun, as the man struggled with police, the city’s police chief said Monday.

Brooklyn Center Police Chief Tim Gannon described the shooting death Sunday of 20-year-old Daunte Wright as “an accidental discharge.” It happened as police were trying to arrest Wright on an outstanding warrant. The shooting sparked violent protests in a metropolitan area already on edge because of the trial of the first of four police officers charged in George Floyd’s death.

The unrest in Brooklyn Center came hours before the trial of Derek Chauvin, the former Minneapolis police officer charged with murdering George Floyd, was set to resume in a courtroom less than 10 miles away on Monday.

Outside of the Brooklyn Center Police Department on Sunday night, smoke billowed as a line of police officers fired rubber bullets and chemical agents at protesters, some of whom lobbed rocks, bags of garbage and water bottles at the police.

Brooklyn Center’s mayor ordered a curfew until 6 a.m., and the local school superintendent said the district would move to remote learning on Monday “out of an abundance of caution.”

The man killed by police was identified by relatives and Minnesota Governor Tim Walz as Daunte Wright, 20. Mr. Walz said in a statement that he was monitoring the unrest as “our state mourns another life of a Black man taken by law enforcement.”

Late Sunday, a group of about 100 to 200 protesters gathered around the Brooklyn Center police headquarters and threw projectiles at the police department, Commissioner John Harrington of the Minnesota Department of Public Safety said in a live-streamed news briefing. The group was later dispersed.

Another pocket of protesters broke into about twenty businesses at a regional shopping center, with some businesses looted, according to the police and local media reports.

Anti-police protesters have already spent recent days rallying in Minneapolis as the trial of Mr. Chauvin, a white former city policeman, enters its third week in a courthouse ringed with barriers and soldiers from the National Guard.

Mr. Chauvin is charged with murder and manslaughter for kneeling on the neck of Floyd, a 46-year-old Black man, who was handcuffed during the deadly arrest last May, video of which sparked global protests against police brutality.