This website requires the use of Javascript to function correctly. Performance and usage will suffer if it remains disabled.
How to Enable Javascript
Brexit Reality Stokes Fears for the Peace in Northern Ireland

Brexit Reality Stokes Fears for the Peace in Northern Ireland 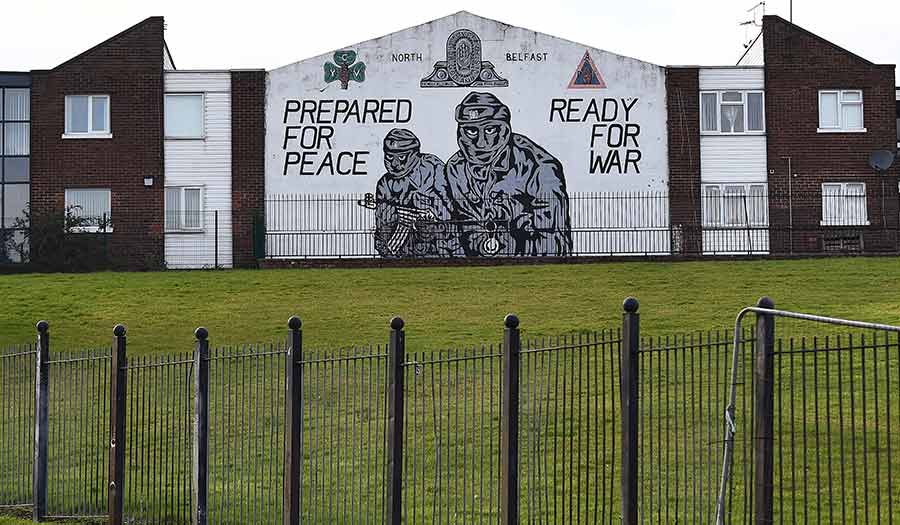 LARNE, Northern Ireland (Reuters) – The deep anger among some pro-British unionists in Northern Ireland over post-Brexit trade barriers that cut it off from the rest of the United Kingdom is emblazoned along the road from Belfast to the mainly Protestant port town of Larne.

Posters demanding “No Irish Sea Border,” “Scrap NI Protocol” and “EU Hands Off Ulster” cover much of the 20-mile route, their opposition to the new trading arrangements emphasized by the flying of Britain’s Union Jack flag every few lampposts.

A dispute between Britain and the European Union over the implementation of the so-called Northern Ireland protocol—designed to prevent a “hard” Irish border—has raised fears that the outrage it has caused among some caught in the middle could spill over into violent protest in the coming months.

“The only thing that gets any results in this country is violence or the threat of violence,” said Alex, a 72-year-old Larne resident who described himself as a “proper unionist.” He declined to give his surname.

“We are part of the United Kingdom, we were born British, we live British and we will die British.”

The British-run region remains deeply split along sectarian lines, 23 years after a peace deal largely ended three decades of bloodshed. Many Catholic nationalists aspire to unification with Ireland while Protestant unionists want to stay in the UK.

Preserving that delicate peace without allowing the United Kingdom a back door into the EU’s single market via the border between Northern Ireland and EU-member Ireland was one of the most difficult issues of nearly four years of tortuous talks on the terms of Britain’s exit from the bloc.

The protocol aimed to solve this by keeping Northern Ireland in both the UK’s customs territory and the EU’s single market.

However, the subsequent disruption at Northern Irish ports to trade in everyday goods such as cheese originating in Britain since the UK left the EU’s orbit on December 31 mean the matter is far from settled.

Unionists say that, in its effort to avoid border checks between Northern Ireland and EU member Ireland and so allay nationalist concerns, the Brexit deal has instead cut them off from the rest of the UK with an effective border in the Irish Sea.

Many unionists say they feel part of their identity is being erased.

This month, Northern Irish loyalist paramilitary groups—who killed Catholics during the years of violence in what they saw as retaliation for Irish Republican Army (IRA) aggression—said they were temporarily withdrawing support for the 1998 Belfast Agreement, also known as the Good Friday Agreement.

While they pledged peaceful and democratic opposition to the Brexit deal, the groups, which include the outlawed Ulster Volunteer Force, Ulster Defence Association and Red Hand Commando, warned British Prime Minister Boris Johnson in a letter “not to underestimate the strength of feeling.”

David Campbell, chairman of the Loyalist Communities Council, which represents the views of loyalist paramilitaries, said a “Pandora’s box” of protest and political crisis would be opened unless the EU agreed to significant changes to the deal.

He said unionist anger was running at the highest level since the 1985 Anglo-Irish agreement, which gave Dublin a consultative role in Northern Irish affairs and prompted mass protests and a rise in loyalist violence.

“The current leaderships of the loyalist organizations are under extreme pressure from, let’s just say, the young Turks who perhaps see an opportunity to go to war on their terms,” he told Reuters.

Britain acknowledged the depth of feeling on Friday, when Northern Ireland Secretary Brandon Lewis said unionist disillusionment with the deal could put the province “in quite a dangerous place in terms of stability.”

The loyalist groups’ statement needs to be taken seriously, said Billy Hutchinson, a former Ulster Volunteer Force (UVF) prisoner who is now the leader of the Progressive Unionist Party (PUP), a small loyalist political party with links to the UVF.

While Northern Ireland voted 56 to 44 percent to remain in the EU in the 2016 referendum, many unionists, who largely backed Brexit, thought it would enhance their Britishness, according to Mr. Hutchinson.

Mr. Johnson’s government had pledged there would be no new barriers to trade within the UK.

“If there hadn’t been a pandemic, I’m absolutely confident that people would have gone on the streets,” said Mr. Hutchinson, who served 15 years in prison for the murder of two Catholic half-brothers in the 1970s.

“If the political parties on the unionist side don’t try to head that off by giving them some sort of hope, some sort of leadership, then you will have violence.”

Few believe the region will return to the bombings and tit-for-tat killings of the “Troubles,” the period that left more than 3,600 people dead. The loyalist groups, though not formally parties to the 1998 accord, endorsed the peace deal and decommissioned their weapons in the years that followed.

Return to the Streets?

However, a repeat of the 2013 protests, when petrol bombs and guns returned to the streets of Belfast after a vote by local councilors to end a century-old tradition of flying Britain’s flag from City Hall, is seen as a distinct possibility.

Although the unionist anger is aimed mainly at London, outnumbered nationalists in towns such as Larne fear they could be the target if demonstrations turn ugly, according to James McKeown, a local councilor for the largest pro-Irish party, Sinn Fein, formerly the IRA’s political ally.

Mr. McKeown grew up in Larne but in 1998 his family were told by police to leave after their home was repeatedly shot at and petrol bombed. He moved to nearby Carnlough, a picturesque, mainly Catholic village where the Irish flag flies in the harbor.

“Unfortunately in towns like Larne, there is always that element of tension. Has it heightened it? Yes it has,” Mr. McKeown said. “There are a lot of people on both sides of the community apprehensive and fearful about where we could go from here.”