This website requires the use of Javascript to function correctly. Performance and usage will suffer if it remains disabled.
How to Enable Javascript
Trash Fills Bosnia River Faster than Workers Can Pull It Out

Trash Fills Bosnia River Faster than Workers Can Pull It Out 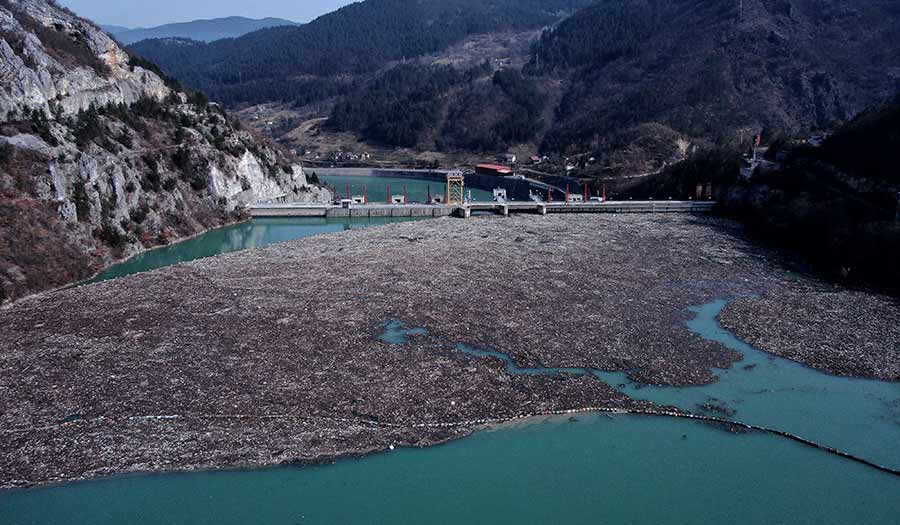 AP/Kemal Softic
Garbage floats near a dam in the Drina river near Visegrad, Bosnia (Feb. 24, 2021).

VISEGRAD, Bosnia-Herzegovina (AP) – Environmental activists in Bosnia are warning that tons of garbage floating down the Balkan country’s rivers are endangering the local ecosystem and people’s health.

The Drina River, located on the border between Bosnia and Serbia, has been covered for weeks with trash that has piled up faster than the authorities can clear it out.

Weeks of wet winter weather that swelled the Drina and its tributaries pulled plastic bottles, rusty barrels, used tires, old furniture and other rubbish into the water.

Near the eastern Bosnian town of Visegrad, islands of garbage can be seen floating on the emerald-colored water as they advance toward the dam of the local hydroelectric power plant.

Activists say the situation is similar for miles up and downstream from Visegrad.

“This is a problem of huge proportions,” warned Dejan Furtula of the local environmental group Eko Centar Visegrad. “I am appealing on all institutions and everyone who can help to join the [clearing] process.”

Local authorities have been working to remove the garbage, but more trash is constantly arriving from upstream, carried also by the Drina’s tributaries in Serbia and Montenegro. The waste eventually piles up by the Visegrad dam. The 215-mile-long Drina later flows into the Sava River.

Mr. Furtula said that micro plastics and toxins from the garbage end up in the food chain, threatening both wildlife and humans.

“The entire ecosystem is in danger,” he said. “We all eat fish here.”

Waste management is a problem in many Balkans nations, where the economies are struggling and environmental issues often come last, after efforts to step up employment and industry production.

Serbia recently faced a similar garbage-clogging emergency at an accumulation lake. Unauthorized waste dumps dot hills and valleys throughout the country, while trash litters roads and plastic bags hang from the trees.

The Drina clearing effort in Bosnia received a boost this week from a startup based in Germany that brought in a garbage-picking vessel dubbed Collectix.

Everwave co-founder Clemens Feigl said “shocking” images of the trash-covered river motivated the company to come over to help.

“We will try in the next days to get as much waste as possible out of the water,” he said. “We will be in action for the next 14 days and will give it our everything.”

In addition to river pollution, many countries in the Western Balkans have other environmental woes. One of the most pressing is the extremely high air pollution affecting a number of cities in the region.

“We just need to all to work more to boost ecological awareness,” Mr. Furtula said.