This website requires the use of Javascript to function correctly. Performance and usage will suffer if it remains disabled.
How to Enable Javascript
Ten Years After Uprising, Some Bahrainis Still Counting the Cost

Ten Years After Uprising, Some Bahrainis Still Counting the Cost 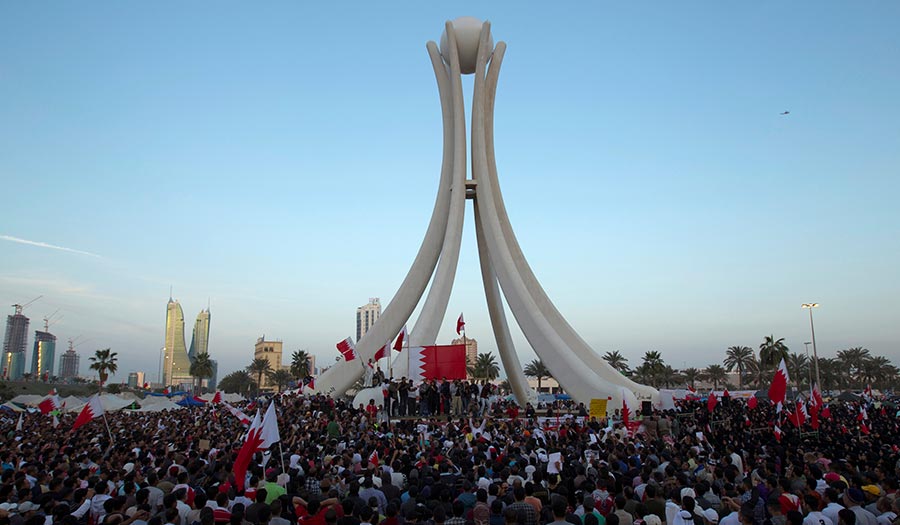 DUBAI (Reuters) – For Bahraini activist Maryam al-Khawaja, who lives in self-imposed exile in Kansas City, the pandemic at least had a silver lining. Authorities at home allowed her to speak to her jailed father online because personal prison visits were banned.

“I had the chance to see his face for the first time since 2014,” she told Reuters.

It was an unexpected moment of joy, yet also a reminder of the toll Bahrain’s uprising 10 years ago has taken on her family.

Her father, Abdulhadi al-Khawaja, is former president of the Bahrain Centre for Human Rights, who is now serving a life sentence for his role in Bahrain’s pro-democracy movement.

As so-called “Arab Spring” protests swept Egypt, Tunisia, Libya and Syria a decade ago, Bahrain was the only Gulf country to see mass upheaval.

Tens of thousands took to the streets to demand reforms. Violence spread as members of the Shi’ite Muslim majority rose up against the Sunni royal family. Martial law was declared, and, with the help of Saudi forces, Bahrain cracked down on dissent.

Abdulhadi al-Khawaja was among thousands of activists, opposition members and journalists that rights groups say were jailed in the Sunni-ruled island state, headquarters to the U.S. Navy’s Fifth fleet.

It said 35 people, mostly protesters, died, 3,000 were detained, over 4,000 lost jobs, and hundreds were maltreated in detention.

Ms. Khawaja said her father looked thinner than the last time she saw him in person, when she herself was detained in Bahrain and they were allowed a family visit. His face was also altered by a jaw shattered during his detention, she added.

When the 33-year-old saw news footage of George Floyd pleading “I can’t breathe” as a U.S. police officer knelt on him last year, it brought a sense of déjà vu. She said her father uttered the same in 2011 as Bahraini police dragged him down the stairs.

“So Much to Lose”

Ala’a al-Shehabi, now an academic at University College London, recounted the initial sense of hope during a peaceful march to the royal palace in al-Safriyah, outside the capital Manama, in 2011.

“We were standing at the gate of the palace, and that gate felt like the only thing that stood between us and a political transformation in Bahrain,” Ms. Shehabi recalled.

“We thought we didn’t have anything to lose. It turned out we had so much to lose.”

Long before the tumult of ten years ago, the opposition had complained of discrimination against Shi’ites in the workplace and public services, and demanded a constitutional monarchy with a government chosen by an elected parliament.

The government denies discrimination and accuses Shi’ite power Iran of stoking unrest, a charge Tehran denies. Since 2011, Bahrain has seen sporadic clashes between protesters and security forces, who have been targeted by bomb attacks.

The government denies deliberately targeting the opposition, saying it acted as it did to preserve Bahrain’s national security.

Sayed Ahmed al-Wadaei, a human rights activist who fled to London, tasted liberty early in the uprising when tens of thousands of Bahrainis joined the funeral of a protester who had been shot and killed.

“I felt real freedom that day, we could say whatever we wanted,” said Mr. Wadaei, whose citizenship was revoked in 2015 when he organized a protest against King Hamad as he visited Britain.

In 2019, the king reinstated nationality to hundreds of Bahrainis stripped of citizenship. The list, reviewed by Reuters, did not include major opposition and activist figures.

Ali Al-Aswad, a former MP from the main dissolved al-Wefaq opposition group who has been sentenced in absentia to life in prison, said reconciliation in Bahrain hinged on outside powers defusing tensions in the region.

“I believe there won’t be any solution to Bahrain’s unrest without broader regional and international steps to ease tensions, be it between Iran and Saudi Arabia or between the U.S. and Iran,” said Mr. Aswad, who has been residing in London since 2011.

A World in Captivity