This website requires the use of Javascript to function correctly. Performance and usage will suffer if it remains disabled.
How to Enable Javascript
7 Years After the Arab Spring

7 Years After the Arab Spring 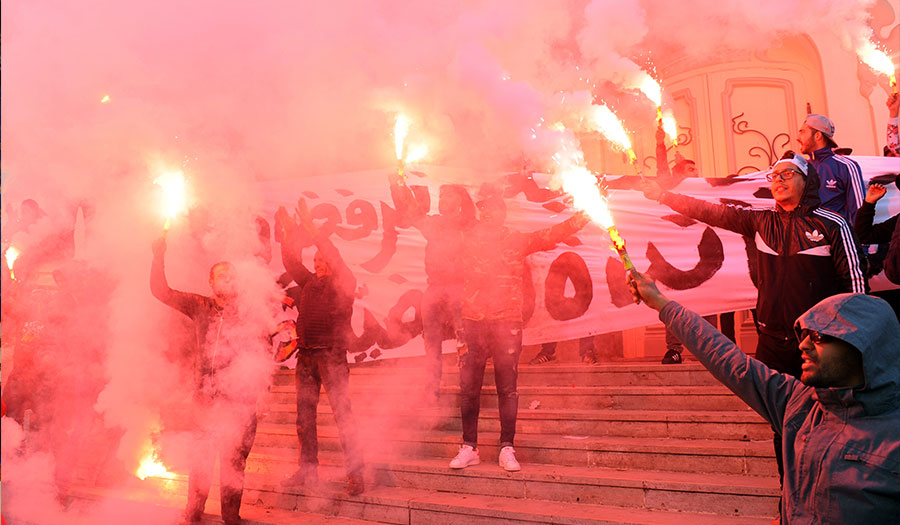 On December 10, 2010, Mohammed Bouazizi doused himself in fuel and set himself on fire. He was protesting the economic conditions in Tunisia after alleged mistreatment by police who had confiscated his unlicensed vegetable cart. He died from his burns almost a month later not knowing the movement his actions would inspire.

Ten days after Bouazizi’s death, the 23-year reign of Tunisia’s President Zine el-Abidine Ben Ali ended. The dictator stepped down because of intense public outcry. But the change did not stop with the nation.

The Tunisian revolt eventually led to Arab Spring upheaval in Libya, Syria, Yemen, Egypt and Bahrain. Seven years later, the political and social situations in all of these nations remain shaky at best.

Tunisians observed the seventh anniversary of their uprising with demonstrations and protests over failed government leadership and a flagging economy.

President Ben Ali’s ouster seemed to transform the country into a budding democracy. Tunisians imposed a new constitution, opened the way to free elections and reinforced equality among sexes—all while the nation battled deadly extremist attacks, including on tourists at the famed Bardo Museum and at a resort hotel outside the seaside town of Sousse.

But six governments later, the North African nation’s economy has struggled. Loans continue to weigh on the Tunisian economy, continued extremist attacks have sapped the important tourism sector, and regions far from the capital, where the revolution was ignited, remain neglected.

The jobless rate is above 15 percent, according to official figures, and above 25 percent in some regions, with vast areas of the interior still marginalized. Inflation is officially above 6 percent, evaluated at plus 9 percent by some experts.

A new finance law raising prices of essential goods and adding new taxes sparked the most recent protests, which began with small demonstrations around the country before ballooning and degenerating into theft, pillaging and car-burning in some places.

Tunisian authorities announced plans to boost aid to the needy in a bid to placate protesters. Prime Minister Youssef Chahed decided to allocate 100 million dinars (about $40 million) to help 200,000 of the neediest families and provide free healthcare for the jobless. An aid fund for poor families to acquire housing also was created.

The Popular Front, a coalition of leftist parties, called the prime minister’s measures “laughable” and called for protests “until suspension of the measures in the finance law that affect citizens’ buying power.”

One person died outside the capital, Tunis, as a result of the protests and scores were injured, including 97 security officers in what became five days of unrest, Interior Ministry spokesman Khlifa Chibani said. Dozens of police cars were damaged, two police stations burned and eight others ransacked. Arrests were put at nearly 780, including 16 religious extremists, for vandalism and looting. A police crackdown eventually stemmed the unrest.

President Beji Caid Essebsi, in charge since December 2014, attempted to calm the worsening situation saying, “Tunisians are capable of overcoming current difficulties.” He called on citizens “for a bit of patience and understanding.”

Yet citizens have grown tired of waiting.

“I’ve been out of work for seven years and see nothing ahead, no flicker of hope for a better future,” said Ali Ben Mahmoud, a university graduate from Tunis who took part in the most recent demonstration organized by the group Fest Nestanaou (What Are We Waiting For).

“The revolution brought nothing concrete to our daily lives, which only get worse and worse,” she said. “The politicians, whose only concern is their comfort, leave us in despair.”

Including Tunisia, nations in the Mideast and northern Africa continue to struggle with issues that remained unsettled after Arab Spring revolutions.

Protests, which began on January 25, 2011, led to the ouster of long-time president Hosni Mubarak. His successor Mohamed Morsi of the Muslim Brotherhood was removed through a coup led by then minister of defense, General Abdel-Fattah el-Sissi, who became Egypt’s president by popular election in 2014.

Today, many see a regime reminiscent of the one overthrown in the wake of the Arab Spring. According to Al-Jazeera, President Sissi’s government “has imprisoned tens of thousands of Egyptians without charge and banned public protests by passing legislation prohibiting the gathering of 10 or more people, without prior authorisation.”

President Sissi reportedly has silenced rivals seeking to run against him in the upcoming presidential race, leaving him as the only candidate in the race.

Beginning in January 2011, protests spread in opposition to unemployment, economic conditions and government corruption. President Ali Abdullah Saleh was ousted in 2012 after an assassination attempt in 2011.

The replacement government was eventually overthrown by Houthi rebels in 2015, sparking a civil war. According to the Council on Foreign Relations, more than 10,000 have been killed, 3 million displaced, and 17.8 million are food insecure in Yemen since the fighting began.

Protests began in Bahrain in February 2011. Youth in the nation used social media to encourage citizens to take to the streets in a Day of Rage. The protests, which began peacefully, led government forces to respond with tear gas and rubber bullets. One protester was killed and more than 30 injured in the initial protest.

According to Amnesty International, Bahraini authorities continue to arrest, torture and intimidate people who speak out against the government.