This website requires the use of Javascript to function correctly. Performance and usage will suffer if it remains disabled.
How to Enable Javascript
Unrest Grows in Crisis-hit Lebanon amid Coronavirus Lockdown 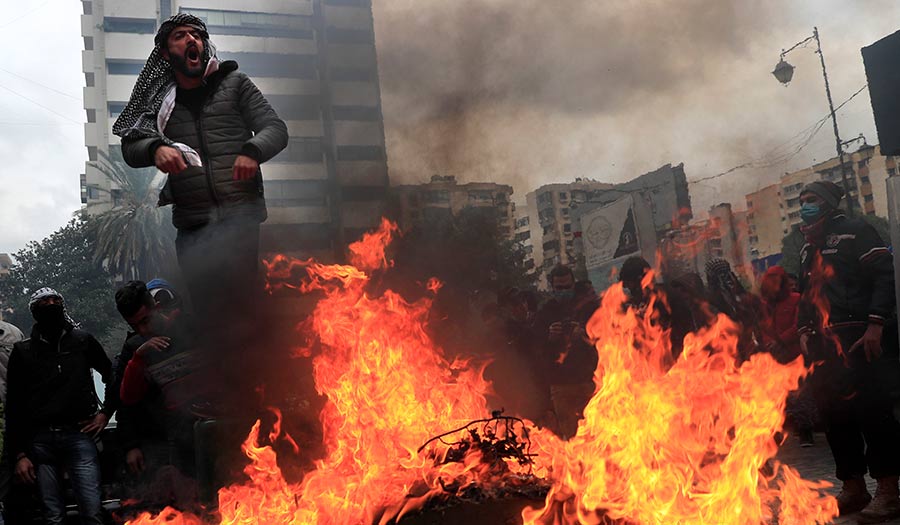 TRIPOLI, Lebanon (AP) – Lebanese rioters set fire to several buildings in the northern city of Tripoli Thursday as outrage over the country’s coronavirus lockdown and inaction of the political class in the face of economic collapse took a more violent turn.

After hours of clashes and following the fires, Lebanese military troops deployed around the city in an effort to quell the rage. Firefighters were battling the flames rising from a historic municipal building after the rioters set fire to it, two other government buildings and a private university that belongs to a rich businessman and politician from the deeply impoverished city.

The unrelenting protests in Tripoli came as Lebanon grapples with both the pandemic and the worst economic crisis in its history, with only a caretaker government in charge.

Protesters had earlier Thursday pelted with rocks the security forces, who responded with volleys of tear gas.

The protests continued after the burial of Omar Taibi, a 30-year-old who was shot by security forces during protests the night before. More than 220 others were injured in the overnight clashes as frustrations boiled over.

The demonstrators took to the streets to denounce Lebanon’s nearly-one month shutdown that has exacerbated already dire conditions. The confluence of the crises has posed the biggest threat to Lebanon’s stability since the end of its civil war in 1990.

Tripoli, Lebanon’s second largest city and its most impoverished, has been a center for demonstrations against the country’s political class. Smaller protests were reported Thursday and earlier in the week in Beirut and the eastern Bekaa region.

Even before the crises, almost the entire Tripoli workforce depended on day-to-day income. A September study by CARE International in the city of over 250,000 found that the average household income is 145,000 Lebanese pounds—or less than $20 at the current average black market rate—and 33 percent of those sampled were unemployed.

Dozens of young men have been taking part in the nightly protests in Tripoli, throwing rocks at security forces and in some cases, torching vehicles. On Wednesday, protesters repeatedly tried to break into the municipal building. Some lobbed hand grenades at security forces, who responded with water cannons, volleys of tear gas and finally, live ammunition.

The National News Agency said 226 people were injured in the confrontations, including 26 policemen. Mr. Taibi, who was hit by a bullet, died of his wounds Thursday, it said.

On Thursday, security forces brought reinforcements and put up barbed wire around the municipal government compound, known as the Serail. Two torched cars stood nearby. Shops and cafes were open and traffic appeared normal on the streets in clear defiance of the government’s lockdown measures.

Before midnight, Lebanese Red Cross said 112 people were injured in the clashes, including six who were hospitalized. The Internal Security Forces said some of the firebombs used by the protesters fell inside the Serail, sparking a fire in a religious court building within the compound. Later, rioters set fire to a nearby historic municipal building, according to the National News Agency. The rioters also torched the building of a private university that belongs to a former prime minister and they set fire to two other local government offices.

Maher Atiyeh, a 39-year-old cafeteria employee, stood looking at the wreckage of his torched car. He said he did not make it in time to remove his car after police called him Wednesday night to pick it up from near the municipal building.

There’s real suffering and poverty in Tripoli, Mr. Atiyeh said, but added he was for peaceful protests and against the violence.

“The country is destroyed. People are hungry and such violence only hurts us more,” he said.

Dozens of mourners, most without masks, took part in the funeral of Mr. Taibi, whose body was placed in a coffin wrapped in a green cloth. Some fired their guns into the air in a traditional expression of grief.

With a dramatic surge in coronavirus infections, the government has imposed a nearly month-long nationwide lockdown and round-the-clock curfew until February 8. The measures come on top of the crippling economic and financial crisis that preceded the pandemic in this small country of nearly 5 million people and over 1 million refugees.

Since 2019, the Lebanese currency has been crashing, losing so far over 80 percent of its value. Banks have imposed controls on withdrawals and transfers to protect dwindling foreign reserves. Unemployment and inflation have skyrocketed and tens of thousands have been thrown into poverty. About half of the population is now below the poverty line.

While the protests are targeting the lockdown measures, they also reflect the growing anger over authorities’ indifference in the face of Lebanon’s meltdown. The cash-strapped government has done little to compensate or help the impoverished cope with the growing hardships.

“We are not allowed to work. We stay at home, we beg to get bread,” said Rabie Alkheir, a taxi driver. The 55-year-old said if he misses a day of work he misses providing a proper meal for his family.

“Our lawmakers are not taking care of us, we are dying,” he said.

Meanwhile, a power struggle is taking place between the president and prime minister-designate. Fighting over Cabinet seats has blocked the formation of a new government, which is crucial to enacting reforms that would unlock foreign financial assistance. The current government resigned in August, following the massive explosion at Beirut port that killed over 200 people and wounded thousands and remains in caretaker capacity.

The troubles have piled up since, including the recent surge in coronavirus cases largely blamed on a decision to relax lockdown measures during the holidays. Some 80,000 expatriates traveled to the country to celebrate Christmas and New Years with family and friends.

Hospitals in Lebanon are overwhelmed with COVID-19 patients, reporting near-full occupancy in intensive care-unit beds. Oxygen, ventilators and medicine are in short supply. More than 293,000 infections have been recorded since last February and 2,621 deaths—including more than 1,000 in January alone.

Lebanon’s ruling class has faced rising popular anger since protesters took to the streets in October 2019 in the largest-ever nationwide protests in the country. Demonstrators accused them of mismanaging and robbing the country of its resources and driving it into poverty. The protests later died down, in part because of the pandemic but also because the political class held on to power and divisions emerged among the demonstrators.