This website requires the use of Javascript to function correctly. Performance and usage will suffer if it remains disabled.
How to Enable Javascript
Explainer: Huge Consequences Loom over EU-UK Trade Talks 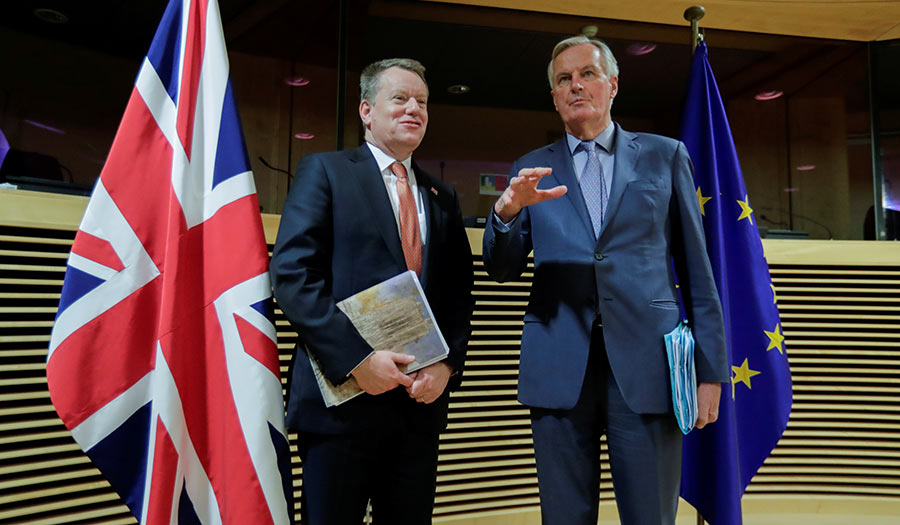 Oliver Hoslet/Pool via Reuters
European Union chief Brexit negotiator Michel Barnier and the British Prime Minister’s Europe adviser David Frost are seen at the start of post-Brexit trade talks between the EU and the United Kingdom in Brussels, Belgium (March 2, 2020).

LONDON/BRUSSELS (Reuters) – Britain and the European Union sought on Sunday to strike an elusive trade deal, with failure likely to end with trade in chaos, markets tumbling and a huge economic price to pay.

Here are some of the potential pressure points of a no-trade deal after five years of Brexit crisis.

Investors and banks have predicted that a deal will eventually be done, so a no-deal would hit sterling, according to major foreign exchange traders.

The shock referendum result on June 24, 2016, sent the pound down 8 percent against the U.S. dollar, its biggest one-day fall since the era of free-floating exchange rates began in the 1970s.

That was nearly double the 4.3 percent drop on September 16, 1992, when financier George Soros “broke the Bank of England” after his bets against the pound were instrumental in the currency’s exit from the European Exchange Rate Mechanism.

Overnight Britain would lose zero-tariff and zero-quota access to the European Single Market of 450 million consumers.

Britain would default to World Trade Organization (WTO) terms in its trade with the 27-state bloc, making it in effect as distant to its biggest trading partner as Australia.

Britain would impose its new UK global tariff (UKGT) on EU imports while the EU would impose its common external tariff on UK imports. Non-tariff barriers could hinder trade, with prices predicted to rise for consumers and businesses.

Any disruption would be felt most keenly by sectors that rely on just-in-time supply chains, including autos, food and beverages. Other sectors likely to be affected would include textiles, pharmaceuticals, and chemical and petroleum products.

The EU is Britain’s biggest trading partner, accounting for 47 percent of its trade in 2019. It had a trade deficit of $106 billion with the EU, a surplus of $24 billion in services outweighed by a deficit of $130 billion in goods.

Even with a deal, Britain’s reasonable worst-case scenario is that 7,000 trucks bound for the continent could stack up in the southern English county of Kent.

A no-trade deal would wipe an extra 2 percent off British economic output in 2021 while driving up inflation, unemployment and public borrowing, Britain’s Office for Budget Responsibility (OBR) has forecast.

The OBR said tariffs under WTO rules and border disruptions would hit parts of the economy such as manufacturing that were emerging relatively unscathed from the COVID-19 pandemic.

The long-term hit could be costly for both Britain and the 27 remaining EU members. Germany, Europe’s biggest economy, is Britain’s biggest EU trading partner.

The shock would be felt unevenly across continental Europe, with those likely to be hit worst including Ireland, the Netherlands, Belgium, France, Luxembourg, Malta and Poland.

The Halle Institute for Economic Research has forecast that EU companies exporting to Britain could lose more than 700,000 jobs if no trade deal is agreed.

Both sides want to avoid a hard border between the United Kingdom’s Northern Ireland and the Republic of Ireland in the EU. Implementing the Northern Ireland protocol of the 2020 Brexit Treaty will be complicated without a trade agreement.

Under the treaty, Northern Ireland remains, in effect, in the EU’s single market for goods and aligned to its customs rules after December 31 unlike the rest of the United Kingdom.

Brexit without a trade deal could allow Northern Ireland to become a back door into the EU’s single market, thus raising the specter of a hard border on the island of Ireland for the first time since a 1998 peace deal.

Both sides would likely blame each other for any chaos after a no-deal exit and Europe would be split just as it faces the challenges of China’s rise, Russian assertiveness and the continuing fallout from the COVID-19 pandemic.

Such a failure could shake the bloc that was created to bind the ruined nations of Europe into a global power after World War II.

The EU would lose one of Europe’s leading military and intelligence powers, its second-largest economy and the only financial capital to rival New York. Britain would be alone, left far more dependent on its alliance with the United States.

Britain is also pushing ahead with legislation known as the Internal Market Bill that would allow it to break parts of the 2020 Brexit Treaty relating to Northern Ireland, making it unclear how far it would implement the divorce deal.

London, the world’s international financial capital, is largely ready for Brexit as a trade deal was never going to cover Britain’s most globally competitive industry.

While most banks and investors have found ways to navigate Britain’s departure from the bloc, the long-term impact of an acrimonious Brexit would be unpredictable and the EU would likely try to grab more market share from the City of London.

London is the center of the world’s $6.6 trillion-a-day foreign currency markets, accounting for 43 percent of global turnover. Its nearest EU competitor, Paris, accounts for about 2 percent.

The British capital is also the global center for euro trading, a potential headache for the European Central Bank.