This website requires the use of Javascript to function correctly. Performance and usage will suffer if it remains disabled.
How to Enable Javascript
Berlin Police Forcefully Disperse Protest Over Virus Rules 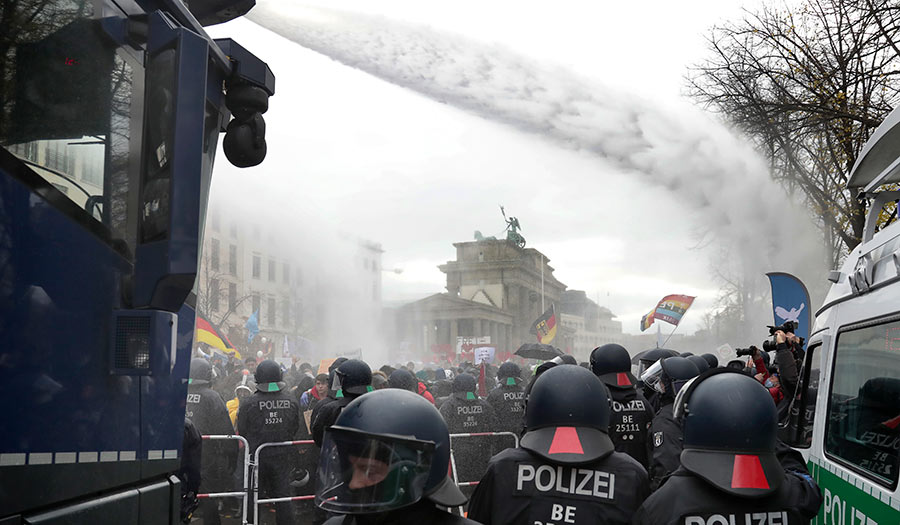 BERLIN (AP) – German police used water cannons and pepper spray Wednesday to disperse people protesting coronavirus restrictions in Berlin’s government district, after crowds ignored calls to wear masks and keep their distance from one another in line with pandemic regulations.

As water sprayed from the cannons rained down on protesters outside the landmark Brandenburg Gate, police in riot gear moved through the crowd carrying away some participants. Some demonstrators threw fireworks, flares and other objects in response as police helicopters hovered overhead.

Officers avoided shooting the cannons directly at protesters because there were children in the crowd, and they worked slowly and methodically to disperse the crowd, Berlin police spokesman Thilo Cabiltz said. Some protesters popped open umbrellas and held their ground until they were eventually forced back.

More than 100 people were arrested, Mr. Cabiltz said, and many more temporarily detained. Nine police officers were injured. The protest crowd thinned significantly by late afternoon as many demonstrators marched back to the city’s main train station, chanting and blowing whistles.

The protests came as German lawmakers debated a bill that would provide legal underpinning for the government to issue social distancing rules, require masks in public and to close stores and other venues to slow the spread of the virus.

The bill easily passed both the lower and upper houses of Germany’s parliament and was fast-tracked to the country’s president, who signed it later Wednesday.

While the virus-prevention measures are supported by most people in Germany, a vocal minority has staged regular rallies around the country, arguing that the restrictions are unconstitutional.

Health Minister Jens Spahn defended the measures in parliament ahead of the vote, telling lawmakers that authorities “struggle every day in trying to strike the balance” between restrictions and safeguarding democratic freedoms.

But he insisted that Germany had found the right path, noting that it has fared much better during the pandemic than many of its European neighbors.

Overall, the country has reported about 833,000 coronavirus cases and more than 13,000 virus-related deaths in the pandemic, a death toll one-fourth the size of Britain’s.

German authorities took the rare step Tuesday of banning a series of protests directly outside the parliament building due to security concerns. Fencing was put up around a wide area that included the Bundestag, nearby parliamentary offices, the federal chancellery and the presidential residence and offices.

Outside the metal cordons, protesters gathered early Wednesday by the Brandenburg Gate, and on streets and bridges. The demonstrators came from all walks of life, ranging from the far-left to the far-right, and included families and students.

“We want our lives back,” read one sign carried by protesters. Another said, “Put banks under surveillance, not citizens.” One demonstrator had a placard showing top German virologist Christian Drosten in prison garb with the word “guilty.”