This website requires the use of Javascript to function correctly. Performance and usage will suffer if it remains disabled.
How to Enable Javascript
After Summer of Protests, U.S. National Guard Puts Troops on Standby for Coming Months 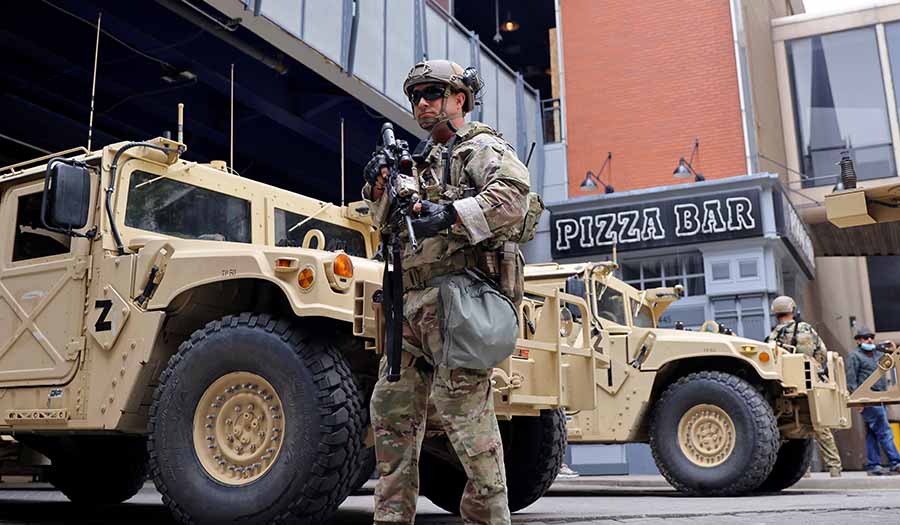 Reuters/Carlos Barria
A member of the National Guard patrols a downtown area, after a grand jury voted to indict one of three white police officers for wanton endangerment in the death of Breonna Taylor, who was shot dead by police in her apartment, in Louisville, Kentucky (Sept. 23, 2020).

WASHINGTON (Reuters) – After a summer of civil unrest over racial injustice in the United States, the National Guard has put hundreds of military police on standby specifically to help law enforcement deal with any potential violence in the coming months, three U.S. military officials have told Reuters.

Officials said the units, consisting of about 600 military police stationed in Arizona and Alabama, were a response to the lessons learned during the violent upheaval after a black man, George Floyd, died in late May when a Minneapolis police officer knelt on his neck.

While the units were not specifically created to address potential violence around the November 3 elections, their existence highlights how the military could help deal with unrest around the vote without deploying active duty troops to cities—a key tenet for Pentagon leadership.

A senior National Guard official, speaking on the condition of anonymity, said the military police “Rapid Response Units” had been established in the past month and could deploy to any part of the country within 24 hours if requested by a governor.

“We’re in very unique times right now in our country, we’ve seen several instances of where civil disturbances escalated very quickly to riots, extensive property damage,” the official said. The units would be on standby until at least the end of the year, the official said.

The National Guard was thrust into the spotlight in June when more than 40,000 troops were deployed to help deal with protests, including in Washington, where thousands marched outside the White House.

The National Guard realized troops needed to have quicker access to equipment and personnel and have better planning, officials said.

National Guard troops do deploy to foreign wars, but are also considered better suited than active duty troops to deal with domestic emergencies such as hurricanes and protests because members tend to be from the communities they serve and have broader authority to assist law enforcement.