This website requires the use of Javascript to function correctly. Performance and usage will suffer if it remains disabled.
How to Enable Javascript
Shooting Suspect Had Bitter History with Maryland Newspaper Where 5 Killed

Shooting Suspect Had Bitter History with Maryland Newspaper Where 5 Killed 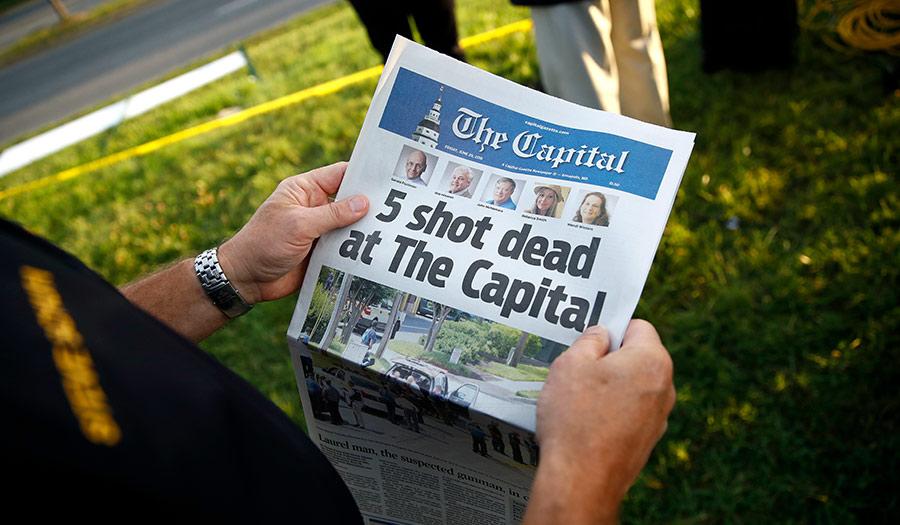 A man who police say opened fire at a Maryland newspaper office on June 28, killing five and injuring two others, had a long, acrimonious history with the newspaper, including a lawsuit and years of harassment of its journalists on Twitter.

Jarrod Warren Ramos, swiftly arrested by police after the attack, was charged Friday with five counts of first-degree murder.

The attack began with a shotgun blast that shattered the glass entrance of the open newsroom. Journalists crawled under desks and sought other hiding places, describing agonizing minutes of terror as they heard his footsteps and the repeated blasts of the weapons. Police said he also was armed with smoke grenades.

“There is nothing more terrifying than hearing multiple people get shot while you’re under your desk and then hear the gunman reload,” tweeted Phil Davis, the paper’s courts and crime reporter. In a later interview appearing on the paper’s online site, Mr. Davis likened the newspaper office to a “war zone.”

Ramos, 38, has a well-documented history of harassing the paper’s journalists that began years ago after the Gazette reported about his criminal conviction in a harassment case. Ramos filed a failed lawsuit against the paper in 2012, alleging the newspaper, a columnist and an editor defamed him.

In his lawsuit, Ramos said the article contained false and defamatory statements, and injured his reputation.

A judge dismissed the suit after asking Ramos to point out a single statement in the article that was false or to give a single example of how it had harmed him. “He could not do so,” an appeals court wrote in upholding the dismissal.

Ramos took to Twitter, where he routinely harassed journalists from the newspaper in scores of profanity-laced tweets. One of those tweets targeted one of the journalists killed Thursday, Rob Hiaasen. In another tweet, he discussed how he would enjoy seeing the paper stop publishing, but “it would be nicer” to see two journalists “cease breathing.”