This website requires the use of Javascript to function correctly. Performance and usage will suffer if it remains disabled.
How to Enable Javascript
French Strikes Cause Railway Chaos and Challenge President Macron 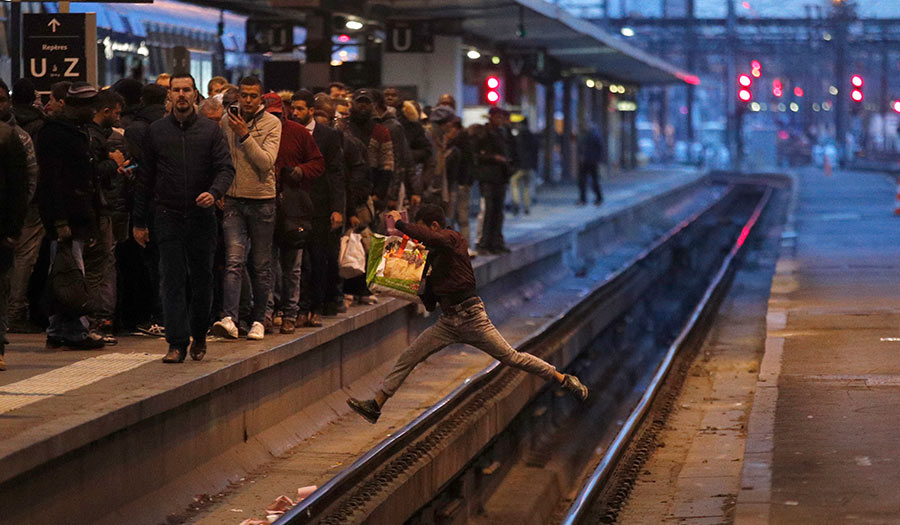 France’s President Emmanuel Macron faces the biggest test yet for his economic policies as transportation workers and other infrastructure servicemen staged mass strikes across the country on what has been dubbed “Black Tuesday.”

Passengers of France’s famed high-speed trains were left stranded after only about 12 percent of trains were left running in the first of a series of strikes that are set to occur every two days out of five for the next three months.

The SNCF national rail authority stated that 77 percent of train drivers were on strike. Passengers are ditching railways, hitching rides on traffic-clogged roads and sharing travel tips online. At the Gare de Lyon station in eastern Paris, platforms were so packed that commuters spilled over onto the tracks as they waited for elusive trains. Traffic was also disrupted on Eurostar lines to Britain as well as trains to Germany.

There was further disruption in the air, with Air France canceling a quarter of its flights Tuesday amid a separate strike over pay. More strikes were planned for the next 10 days.

And there were strikes or demonstrations in other sectors. Students, for example, are blocking campuses to protest plans to allow selection in state universities, while garbage collectors are on strike to protest worsening working conditions.

It is one of the worst days of industrial strife seen in France since Mr. Macron was elected president nearly a year ago. The former banker and political centrist has made reforming France’s economy a major focus of his presidency. However, many of his plans for the labor market are increasingly being met with opposition from the public and unions.

Rail workers in particular are protesting Mr. Macron’s plans to eliminate their special “cheminot” status, which guarantees their jobs and benefits for life.

Unions say Mr. Macron—whom critics dub the president of the rich—is threatening hard-fought French rights that workers in other countries envy, as well as damaging the whole idea of public service.

Emmanuel Macron was elected president on May 7, 2017, after securing 66 percent of the popular vote. Though he was largely a political outsider, he became the youngest president in France’s history.

The overwhelming victory signaled that voters were ready for a political overhaul to bring the nation out of its stagnant economy and high unemployment. One of his major campaign promises was to overhaul French labor laws.

Yet Mr. Macron soon faced backlash from unions. CNN reported: “In a series of five executive orders late August, Macron laid out his goals: to give companies more flexibility in hiring and firing workers, more power to negotiate working conditions directly with employees, and less financial risk in cases of wrongful dismissals.”

As the realities of the office test Mr. Macron’s policies, concern is mounting as to whether he will be able to fix France’s problems or the nation will “risk at choosing more radical change” during the next election in four years, BBC News reported.

For more background on the French president, read Emmanuel Macron: President of France.