This website requires the use of Javascript to function correctly. Performance and usage will suffer if it remains disabled.
How to Enable Javascript
Indonesia’s Forest Burning Threatens Orangutans, Human Health 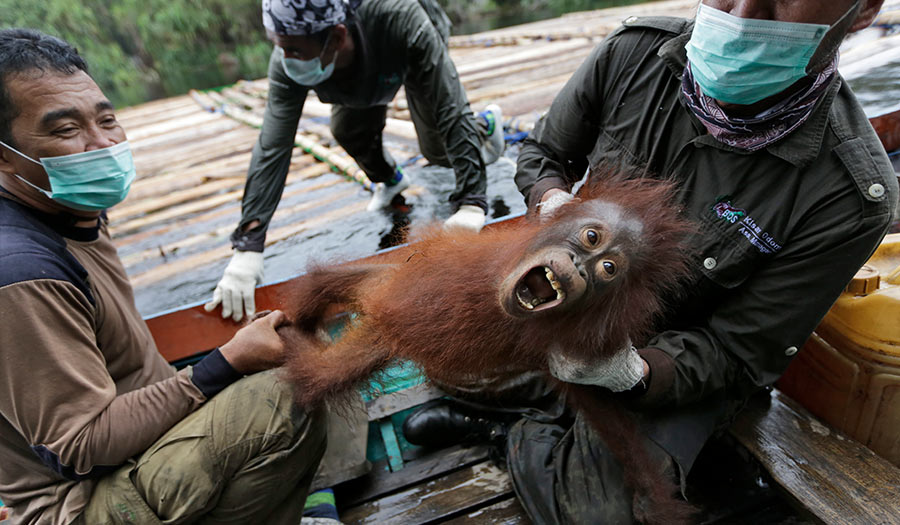 AP/Dita Alangkara
Conservationists of Borneo Orangutan Survival Foundation hold a baby orangutan during a rescue operation for orangutans trapped in a swath of jungle destroyed by forest fires in Indonesia (Jan. 7, 2016).

The population of orangutans on Borneo—the largest Asian island and third largest in the world—has plummeted by half in 15 years as their habitat has been reduced by the palm oil and paper industries, according to findings to be published in the journal Current Biology.

Researchers from the Max Planck Institute for Evolutionary Anthropology and other institutions said the original population of the gentle ginger-haired great apes is larger than previously estimated but so is the rate of decline. The apes are already considered critically endangered by the International Union for Conservation of Nature.

“Orangutans are a very slow breeding species,” said Serge Wich of Liverpool John Moores University, one of the researchers. “If only one in 100 adult orangutans is removed from a population per year, this population has a high likeliness to go extinct.”

The most dramatic declines were found in areas where tropical forests were cut down and converted to plantations for palm oil, which is used in a vast array of consumer products and for timber.

“In these forest areas human pressures, such as conflict killing, poaching, and the collection of baby orangutans for the pet trade have probably been the major drivers of decline,” the authors of the study said.

In addition to the animals, humans are at risk from health-hazardous forest fires that result from smallholders and plantation companies clearing land for planting.

Four Indonesian provinces have declared emergencies in anticipation of worsening forest fires that each year spread a health-damaging haze across much of Southeast Asia.

The National Disaster Mitigation Agency said satellites have detected 90 “hotspots” or fires across Indonesia. Pontianak, the capital of West Kalimantan province, has been blanketed in smoke, it said.

Record Indonesian forest fires in 2015 spread haze across a swath of Southeast Asia and, according to a study by Harvard and Columbia universities, hastened 100,000 deaths.

Many areas of Indonesia are prone to rapid burning because of the draining of swampy peatland forests for pulp wood and palm oil plantations.

Pontianak resident Reinardo Sinaga said rain in the past few days reduced the choking smoke that had affected the city for the previous two weeks.

He said haze from peat and forest fires shortened visibility in the streets to around 66 to 82 feet and caused respiratory problems for many residents.

“We hope authorities are able to crack down on the forest burners,” Mr. Sinaga said.