This website requires the use of Javascript to function correctly. Performance and usage will suffer if it remains disabled.
How to Enable Javascript
Europe’s Mounting Cocaine Problem 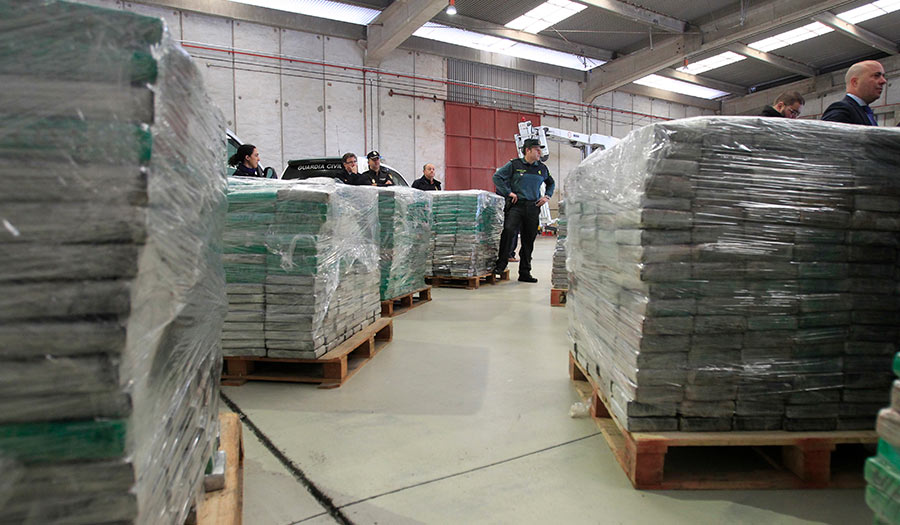 STR/AFP/Getty Images
Law enforcement officials stand next to piles of high-purity Colombian cocaine after Spanish police seized over six tons of the drug (worth $249 million) at the Algeciras seaport (Dec. 5, 2017).

European nations have been inundated by cocaine shipments from South America in 2017, with Germany and Spain having seized record amounts of the drug, according to officials in those countries.

In late November, Spain made its largest cocaine bust in nearly two decades. Authorities found 6.48 tons of cocaine on a shipping container carrying bananas in the port of Algeciras. The shipment had come from Medellin, Colombia, and was en route to El Prat de Llobregat, the location of Catalonia’s international airport.

Europe’s record drug busts contributed to a global increase in the amount of cocaine seized in 2017, which is set to surpass last year’s record of 641.5 tons.

Experts say the increase is the result of improved conditions for cocaine production in South America. European police organization Europol explained: “Over the last three years, the production of cocaine in Colombia has intensified significantly following a peace accord between the government of Colombia and…[Revolutionary Armed Forces of Colombia] insurgents. The production output of cocaine increased by 60% from 2014 to 2015. Between 2015 and 2016, Colombian coca cultivation areas expanded by 52% representing a further increase in production output of 34%.”

“Cocaine is trafficked to Europe by both sea and air, primarily via Colombia, Brazil and Venezuela. The Caribbean and West Africa are important transit areas, while Central America appears to be becoming more important. Cocaine is also trafficked via routes for other drugs, such as cannabis via North Africa and heroin through East Africa.”

Authorities are concerned that cocaine use will enter mainstream us among Europeans as a result of increased supply.

“Dealers are following the motto: ‘Supply creates demand,’” Christian Hoppe, head of the BKA’s counter-narcotics division, told Hamburg public radio broadcaster NDR. “The supply in South America has increased, which means we have a flood of cocaine.”

According to the European Monitoring Center for Drugs and Drug Addiction, there are 3.5 million cocaine users in Europe, which is home to 508 million people.