This website requires the use of Javascript to function correctly. Performance and usage will suffer if it remains disabled.
How to Enable Javascript
Report: 5,600 ISIS Foreign Fighters Have Returned Home 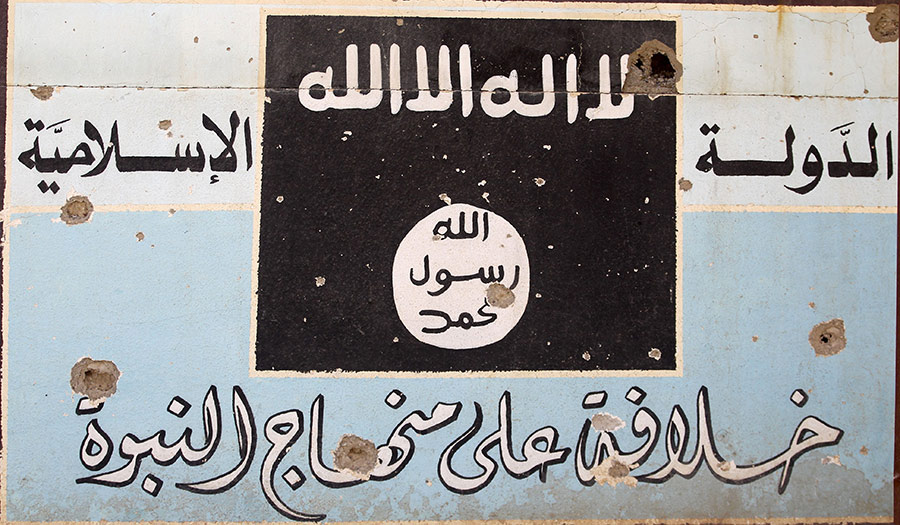 Ahmad Al-Rubaye/AFP/Getty Images
A mural in Hawija, Iraq, which was retaken from the Islamic State group by Iraqi security forces, depicts the emblem of the terror organization (Oct. 5, 2017).

Despite large territorial gains during the Islamic State group’s sudden rise in 2014, virtually all of its holdings in Syria and Iraq have since been liberated. But the battle against the extremist organization may just be starting as the 40,000 fighters from around the world who joined since 2011 are starting to return to their home countries.

According to a report from United States based think tank the Soufan Center, 5,600 people from 33 countries have returned from the Middle East after fighting with ISIS.

Countries with the highest number of returnees were Turkey with 900, Tunisia with 800, Saudi Arabia with 760, and Russia with 400.

Though fewer, a significant number have returned to European countries: 271 to France, 300 to Germany, 425 to the United Kingdom—half of the total number that left the country to fight—126 to Sweden, and 102 to Belgium.

The United States also has had a few returnees. Out of 129 who left the U.S. to join ISIS, seven have returned home.

Many of the returnees are women and children who did not take part in fighting. However, the report stated that returning “women and children represent a particular problem for [nations], as they struggle to understand how best to reintegrate these populations.”

The Islamic State continues to pose a terrorism threat, particularly in the West. From 2014 to 2016, 90 percent of all terrorist attacks in Western nations were linked to the group, according to the European Commission’s Radicalization Awareness Network.

Officials are concerned that though many former fighters could be disenchanted with extremism, many may continue to harbor extremist ideals and, having been trained on the ground with ISIS, could continue to wage violent jihad.

The New York Times reported: “Some fighters leaving conflict zones seem to have been briefed in detail on how to act when they encountered government authorities, in an apparent attempt to ensure that they would not be deported to countries where they may be arrested, [a] United Nations report noted. That might indicate a deliberate attempt by Islamic State leaders to establish a presence in different regions, the report concluded.

“The report said people returning from these conflict zones fell into three broad categories: First, those who were disenchanted by their experiences in Iraq or Syria and were good candidates to be reintegrated into society.

“Second, a much smaller group who return intending to conduct terrorist attacks. And third, individuals who have cut ties with the Islamic State and are disillusioned by the organization, but who remain radicalized and are ready to join another terrorist group should the opportunity arise.”

The Soufan Center’s report stated that many fighters have already joined militant groups in the Philippines, Afghanistan, Libya and Egypt.

“It is highly likely that even as the territorial caliphate shrinks and is increasingly denied an overt presence, its leadership will look to supporters overseas, including returnees, to keep the brand alive,” the report stated.