This website requires the use of Javascript to function correctly. Performance and usage will suffer if it remains disabled.
How to Enable Javascript
EU Pushes for European Army 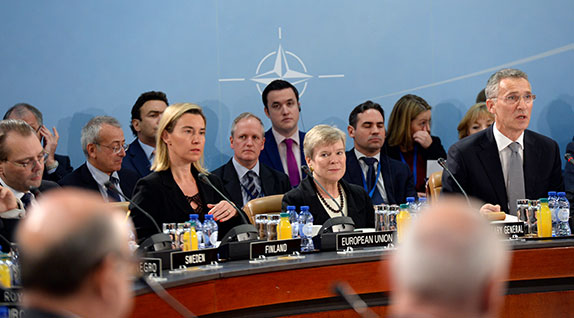 In November, the European Parliament adopted a resolution urging “the EU to establish ‘multinational armed forces,’ in which ‘all member states’ should participate in one way or another” (ibid.). The combined military force would be “capable of independently waging wars” and would act on the interests of the EU instead of NATO.

According to German newspaper Frankfurter Allgemeine, adopting the resolution could prompt Germany to develop an arsenal of nuclear weapons as “the French and British arsenals…would be insufficient” to meet the EU’s needs.

“Europeans need to come up with a strategy of their own,” Wolfgang Ischinger, chairman of the Munich Security Conference and former German ambassador to the United States, wrote in an article he contributed to The New York Times. “The challenges are tremendous—and it is in Europe’s self-interest to speak with one voice, and to be a more credible and capable actor in regional and global crisis management. For that, Europe needs to invest more in civilian and military capabilities, and to start pooling and sharing defense assets more comprehensively.”

During a speech in Brussels on future NATO-EU relations, EU High Representative for Foreign Affairs and Security Policy Federica Mogherini promoted the resolution by stating that the power bloc “can only succeed in providing security to our citizens if we work together as a true union, with the full potential of a super power, in the field of security and defence.”