This website requires the use of Javascript to function correctly. Performance and usage will suffer if it remains disabled.
How to Enable Javascript
Third Major Terror Attack in 18 Months Strikes France 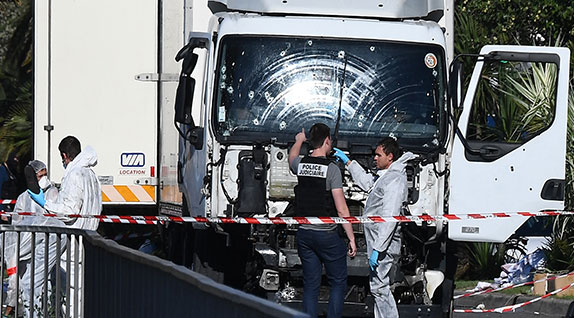 Carnage: Forensic and police officers process the crime scene where a terrorist drove a truck through a crowd and killed dozens before being shot dead by police in Nice, France (July 15, 2016).

A truck driven by a gun-wielding Islamic extremist killed 84 people, including 10 children, and injured 202 in Nice, France, during Bastille Day celebrations, a national holiday similar to July 4 in the United States. The attack occurred on the seaside walk Promenade des Anglais in the southern French city.

“Witnesses described total chaos, with the crackle of gunfire and people screaming as they fled the scene,” The Washington Post wrote. “Graphic video and photographs flooding social media showed the bodies strewn for a mile along the boulevard where the truck plowed into the crowd. Revelers ran while sirens blared.”

One witness told the newspaper: “I saw bodies flying.”

The truck, operated by a French Tunisian, drove onto the sidewalk adjacent to the road. The killing spree lasted for 30 minutes before the driver was killed by police gunfire. The Islamic State terror group has since stated that the attacker was one of its own.

The incident comes fresh on the heels of a series of terror attacks on the European Union for which the terror group claimed responsibility. In January 2015, gunmen stormed the offices of satirical magazine Charlie Hebdo, killing 17. In November of that year, 132 were killed and over 350 injured by bombings and shootings in Paris. Then in March 2016, bomb attacks in Brussels left 32 dead and 340 injured.

These terror events have kept France under a constant state of emergency. President Francois Hollande had pledged to lift the emergency just days prior to the most recent attack, but has since extended it.

Mr. Hollande stated, “All of France is under the threat of Islamic terrorism,” and vowed to increase security measures and the effort to fight terrorist groups in Iraq and Syria.

The Real Truth covered the continued rise in terrorism in the article “11 Things You Must Know About the Islamic State.”

It explained exactly why terror and violence are trending upward: “The rise of ISIS [the Islamic State] is like nothing the world has ever seen. Their appearance has left the world community scrambling to combat them…Seeing the sobering and increasing levels of unrest in the Middle East, many are afraid of what ISIS means for the future of this region.”

Now that same unrest and fear has come to the West.

The article continues: “These dangerous times have caused millions of people, Christians and non-Christians alike, to wonder if mankind has reached the ‘end-times.’ Others believe without doubt that we are living in the ‘end of days.’

“Can this question be answered—with proof?

“The answer begins with Jesus Christ’s words in John 16. Most do not realize the Bible speaks of our time.

“Jesus Christ spoke of a period just before His Return when people would kill and think that they were serving God. Notice: ‘…the time comes, that whosoever kills you will think that he does God service’ (vs. 2).

“Christ was talking to His disciples at the time, but His next statements recorded in verses 3 and 4 show He was primarily addressing His followers who would come later: ‘And these things will they do unto you, because they have not known the Father, nor Me. But these things have I told you, that when the time shall come, you may remember that I told you of them…’

“Most do not realize that Bible prophecy is being fulfilled in our time—and can be seen in today’s headlines. This modern dangerous world was foretold.”

While the Bible does prophesy that there are turbulent times just ahead, the core message of God’s Word is not one of doom and gloom. On the contrary, it paints the picture of a coming time of global peace, safety, happiness and abundance.