This website requires the use of Javascript to function correctly. Performance and usage will suffer if it remains disabled.
How to Enable Javascript
Why Britain’s Exit from the EU Is No Surprise

Why Britain’s Exit from the EU Is No Surprise 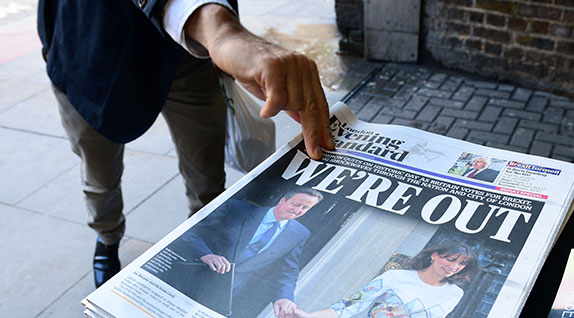 The result: A man in London picks up a copy of a newspaper the day after the United Kingdom voted to leave the European Union (June 24, 2016).

After a historic referendum on whether to remain in the European Union, Britain voted 51.9 to 48.1 percent to leave the power bloc. For the UK, this is just the latest example that the nation is different from the rest of the continent. For the EU, the event joins terrorism worries, the refugee crisis, and financial woes as yet another strain on an “ever closer union.”

The Brexit (short for British exit) referendum—which had the highest turnout of any UK-wide vote since 1992—drove a dip in stock markets, with the Dow Jones industrial average falling over 2.5 percent and the British pound dropping to its lowest level against the U.S. dollar since 1985.

After the results were made official, British Prime Minister David Cameron announced he will resign in October. In a speech outside 10 Downing Street, he said that the nation needed “fresh leadership” and he does not believe he is the right person to “be the captain that steers our country to its next destination.”

Mr. Cameron disagreed with the vote result, but still stated, “The British people have voted to leave the European Union and their will must be respected.”

The UK is the second largest economy in the power bloc, which makes its decision to leave a weighty blow for Europe. Leaders across the continent attempted to calm fears and called for greater solidarity in the coming weeks and months:

Pro-Brexit campaigners hailed the outcome as a victory and pointed to the long-term benefits. Ex-London mayor Boris Johnson, a favorite to replace Mr. Cameron, called the vote result a “glorious opportunity” for the UK to have full control over its own laws, taxes and borders.

Although the referendum puts Britain on track to sever itself from the EU, the process will take years. First, the nation must pass laws to allow it to leave the EU, repeal the 1972 European Communities Act, and inform the European Council to invoke Article 50—formally stating its intention to withdraw. Article 50 will provide Britain two years to negotiate terms of exit. All 27 remaining EU members would have to reach a deal with the UK within this time. Meanwhile, the UK must continue to abide by EU laws. Once all this has occurred, the British Parliament could then begin the process of repealing EU regulations.

Even though it will be some time before the UK is officially out of the EU, the Brexit vote is expected to spur major geopolitical shifts throughout Europe. A YouGov poll showed that Sweden, Norway, the Netherlands, Ireland and Denmark are now likely to host their own votes on whether to withdraw.

The vote also reignited tensions between Scotland and England, as the northern country voted to remain in the European Union.

Scottish First Minister Nicola Sturgeon said she is “absolutely determined” to keep Scotland in the EU, which very likely means the country will hold a referendum on independence from the UK. Pro-EU Wales and Northern Ireland expressed similar sentiments.

In addition, analysts predict that Britain’s departure from the EU would push Germany to take on a more dominant position in Europe.

None of this news should come as a surprise for regular readers of The Real Truth. We have always held the belief that a UK-EU divorce was coming and informed readers to watch for an emerging Germany.

The July 2015 article “Britain and the EU: Headed for a Split?” included a telling quote from Mr. Cameron taken from a speech on the in-out referendum: “I know that the United Kingdom is sometimes seen as an argumentative and rather strong-minded member of the family of European nations.

“And it’s true that our geography has shaped our psychology.

“We have the character of an island nation—independent, forthright, passionate in defense of our sovereignty.

“We can no more change this British sensibility than we can drain the English Channel.”

It is this sensibility—Britain’s national character—that has kept the country from fully integrating with the EU. But that character runs deeper, and carries a longer history, than most realize.

The article continued by stating that the British people’s independent streak “has more to do with their national character than most grasp,” and that their “difference of opinion does not merely stem from their own ideologies, but from their historical roots, which have always ensured that a continued union would not be possible.

“The book America and Britain in Prophecy contains the reason the union between this particular nation and Europe is not destined to last—and what lies ahead for the ultimate future of both the continent and the island. You will be stunned by what you read.”