This website requires the use of Javascript to function correctly. Performance and usage will suffer if it remains disabled.
How to Enable Javascript
Belgium’s Black Day 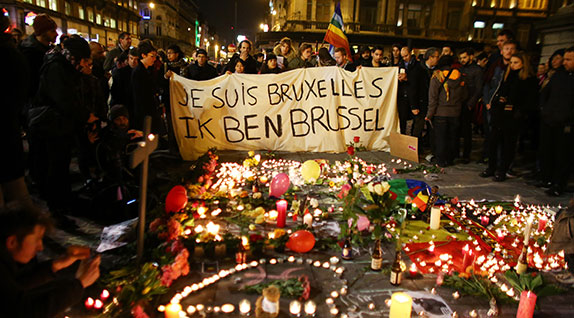 Carl Court/Getty Images
Standing together: People hold up a banner with the words “I am Brussels” written in both French and Dutch as a mark of solidarity at the Place de la Bourse following terror attacks in Brussels, Belgium (March 22, 2016).

Explosions rocked Brussels’s international airport at about 8:00 a.m. local time, with a bomb exploding at a coffee shop followed by a second explosion one or two minutes later. At around 9:10 a.m., another bomb exploded, this time at the Maalbeek Metro train station just a few yards from the headquarters offices of the European Union. More than 30 victims were killed and 270 injured.

Three suicide bombers also died in the blasts and several others linked to the attacks remain at large.

The terrorist group Islamist State claimed responsibility for the attacks, stating in an online post that “‘explosive belts and devices’ were used to massacre passengers checking in at Brussels Airport and on a Metro train” (The Independent).

Charles Michel, Belgium’s prime minister, stated, “We feared a terrorist attack would happen, and this is what happened” (The New York Times). “Terrorists have committed murder.”

Mr. Michel called this a “black day” for the nation.

The tragedy comes days after the arrest of the lead suspect of the November 2015 Paris terror attacks, in which 130 died and scores were injured. He was located hiding in Brussel’s Muslim community. The European Union’s de facto capital has a high concentration of visitors or migrants from volatile hotpots across the Middle East.

Experts speculate that the arrest of the terror suspect may have triggered Islamic State supporters to move up their timetable in unleashing another series of attacks.