This website requires the use of Javascript to function correctly. Performance and usage will suffer if it remains disabled.
How to Enable Javascript
UK Slashes Defense Spending 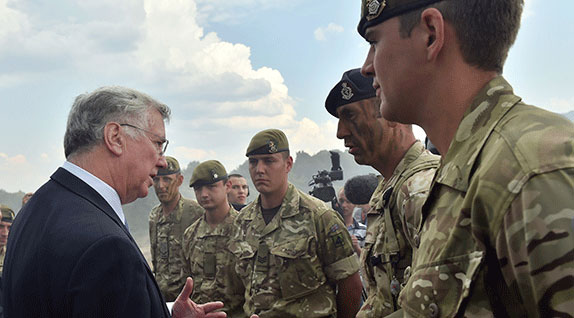 The military strength of the United Kingdom is “feeble” in the face of growing global threats, the nation’s highest commanders have warned. Years of personnel cuts in the armed forces, reduction of arms, and withdrawal from the Middle East have caused fears that the UK would be unable to handle “the real risk of being drawn into a conflict with an increasingly aggressive Russia in Eastern Europe,” The Telegraph reported.

In an article written for The Telegraph, Sir Nigel expressed “disquieting parallels between the situation that confronted our country some 90 years ago and that which now prevails.” Referring to the interim period between the first and second world wars, he said that Britain was unable to face the “growing menace that Nazism presented to European stability.”

“Today, although in very different circumstances, there are some uncomfortable similarities. For example, in the wake of unfinished business in Iraq and Afghanistan, there is currently little public appetite for further, significant military intervention abroad.”

The British government began a defense review this year that will determine manpower and equipment needs based on current threats. Previous reviews have resulted in cuts such as one in 2010 that reduced the armed forces’ equipment significantly and cut the army from 102,000 to 82,000 men.

British First Secretary of State George Osborne announced that the Ministry of Defense needs to make 500 million pounds (over 764 million USD) worth of cuts this year, DefenseNews reported.

Despite the announcement, Defense Secretary Michael Fallon reiterated a pledge by the conservative government that he would not cut the number of armed forces personnel or equipment budget. This came after “US President Barack Obama and his defense secretary, Ash Carter, both spoke out against Britain allowing defense spending to fall below the 2 percent level [of the nation’s GDP],” the news outlet stated.

With regard to additional cuts, Sir Nigel commented in the Telegraph piece, “If the outcome of the [defense] review is a further reduction in military expenditure and not a commitment to a sustained increase, then the Government will be neglecting its prime and overriding duty, the defence of the nation, by failing to halt the progressive decline of British military capability into penny packet numbers.”