This website requires the use of Javascript to function correctly. Performance and usage will suffer if it remains disabled.
How to Enable Javascript
German Meeting Troubles Eurozone Leaders 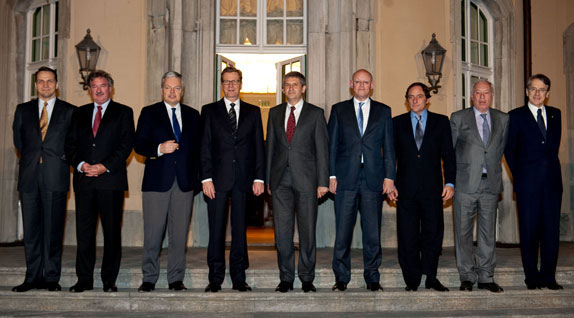 An informal dinner gathering in Germany to discuss Europe’s post-economic crisis future—in which only 10 of the European Union’s 27 countries were invited—ignited criticism from Europe’s leaders.

According to Der Spiegel, “…German news reports quoted sources within the Foreign Ministry saying that they aimed to spearhead a forward-looking strategy ‘at a time of diminishing enthusiasm’ for the European project. They reportedly want the bloc to look beyond Europe’s current crisis, and have suggested that the meeting…could pave the way for future discussion.”

The countries invited were France, Italy, Belgium, Luxembourg, the Netherlands, Denmark, Poland, Portugal and Spain. Denmark and France, however, chose not to participate due to other obligations.

“A diplomat from Sweden, one of the non-invitees, told Spiegel magazine that the German foreign minister was not contributing to EU co-operation by leaving some countries out,” EUobserver reported.

Officials in Ireland, another nation that was not invited, said the meeting was unwise.

“German officials say their invitation list is limited in the interests of a proper conversation…invitees reflect all geographical and historical experiences in the EU, they say,” The Irish Times reported. “Further meetings of this group are likely, but membership is unlikely to be extended.”