This website requires the use of Javascript to function correctly. Performance and usage will suffer if it remains disabled.
How to Enable Javascript
UK Student Tuition Protest Turns Violent 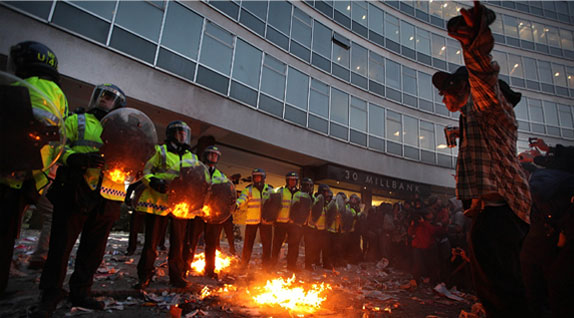 A protest of 50,000 people against the British government’s proposed tripling of university tuition costs escalated into chaos when some demonstrators began breaking windows, throwing eggs and even dropping a fire extinguisher on police. At least 14 people were injured, half of which were police officers, and over 32 were arrested.

Hundreds of workers had to be evacuated from Millbank Tower in London, England, the Conservative Party headquarters, after rioters overpowered security officers.

“Inside the building, demonstrators wearing police hats danced on tables. A protester ripped a security camera from the ceiling and danced in triumph, slogans were spray-painted on walls,” BBC News reported, adding, “A few yards away, in surreal calm, guests carried on eating in the adjacent Pizza Express.”

Journalists also recorded other instances of seemingly apathetic reactions to the violence.

One protestor who did not agree with the violence told Sky News, “We were standing there…and a riot policeman came out with his arms round two female police officers, not in riot gear, both of them bleeding from the head. One of the women had duct tape across the cut on her head—not even a bandage—and, at that point, we turned around and walked away.”

The Telegraph reported that as the violence subsided, “A thick line of riot police surrounded the remaining 25 or so students detained in the lobby of Millbank Tower.

“The students, who had earlier been shouting as they stood feet from officers, fell largely silent but remained cheerful.

“A young woman did her make-up just a few feet away from a uniformed riot officer.”

Authorities are facing accusations for underestimating the amount of manpower needed to contain the protest.