This website requires the use of Javascript to function correctly. Performance and usage will suffer if it remains disabled.
How to Enable Javascript
New British Prime Minister Following Gordon Brown’s Resignation 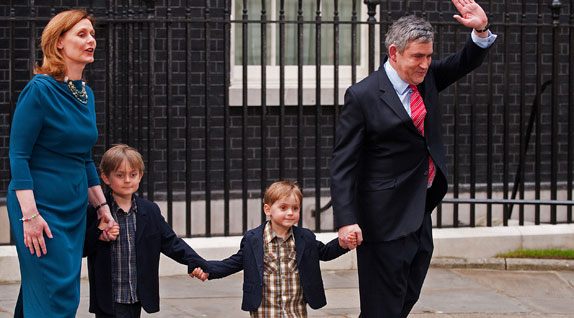 Leon Neal/AFP/Getty Images
Leaving office: Britain’s former Prime Minister Gordon Brown, his wife and children walk to their car after he announced his resignation (May 11, 2010). 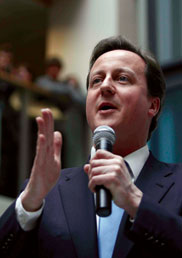 According to British House of Commons rules, the majority party must have more seats than all other parties combined to elect a prime minister. In the recent election, Mr. Brown’s Labour Party had only 29 percent of the vote, or 306 of the 326 seats needed to remain in power. Mr. Cameron’s party won 36 percent and the Liberal Democrats 26 percent.

“The reason that we have a hung parliament is that no single party and no single leader was able to win the full support of the country,” he said.

“As leader of my party I must accept that as a judgment on me. I therefore intend to ask the Labour Party to set in train the processes needed for its own leadership election.”

In a surprising move, the center-right Conservative Party allied with the left-wing Liberal Democrats to form a coalition government, choosing David Cameron as their leader.

British news analysts are unsure how Mr. Cameron will lead the nation—with BBC calling him an “unknown quantity”—especially considering that one coalition term gives Liberal Democrats five seats in the cabinet and one-third of the seats in the majority party.

Mr. Cameron has quickly revealed he is not afraid to stand his ground in political debates. After only two weeks in office, the new prime minister refused to help rescue Europe from financial crisis, despite insistence from Germany and France. He also announced a controversial $8.6 billion worth of cuts in British governmental spending, which will take effect immediately.