This website requires the use of Javascript to function correctly. Performance and usage will suffer if it remains disabled.
How to Enable Javascript
Greek Deficit Threatens EU Currency 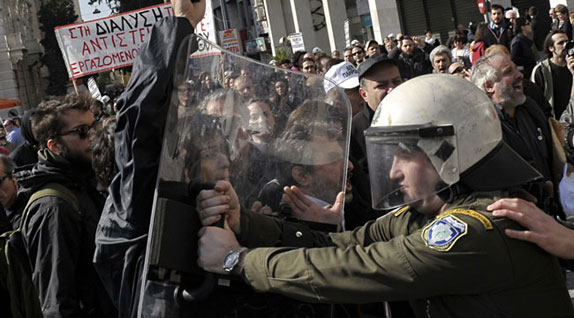 More than 20,000 demonstrators walked off their jobs for a one-day general strike in protest of a possible plan to save some $6.7 billion through wage freezes or cuts for government workers, increased taxes, raising the retirement age from 61 to 63 by 2015, and higher gasoline prices.

The New York Times reported that the “government is under intense pressure to plug a budget deficit estimated at 12.7 percent of gross domestic product and to avert the first national default among the 16 countries that use the euro.”

The latest European Union member to announce a major financial crisis, Greece reportedly needs about $73 billion to combat its bloated budget deficit and has asked for financial assistance from other countries.

The news lowered the value of the euro and brought into question the sustainability of a united European currency.

“Most euro zone countries oppose going to the International Monetary Fund for reasons of political prestige and to avoid any admission that EU budget discipline rules have failed,” Reuters reported. The EU prohibits countries such as Germany and France from putting together a strictly financial bailout package.

“The uncertainty has recently buffeted the euro and the problems have extended to Spain and Portugal, which are also struggling with their deficits. The possibility of Greece or one of the other stricken countries being unable to pay its debts—and either needing an EU bailout or having to abandon the euro—has been called the biggest threat yet to the single currency” (ibid.).