This website requires the use of Javascript to function correctly. Performance and usage will suffer if it remains disabled.
How to Enable Javascript
Somali Refugees Flood Overpopulated Camp Complex 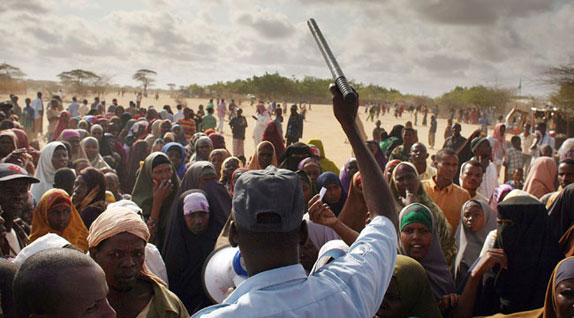 Hundreds of refugees fleeing Somalia have overwhelmed camps in Dadaab, in northeastern Kenya, causing a severe humanitarian crisis, which the United Nations admits it has been unable to handle adequately.

The camp, originally built for at least 90,000 refugees, now houses over 300,000 on three sites—more than triple its capacity—with more arriving daily, according to Rana Jaber, program officer and regional head of operations in Nairobi for the International Organization for Migration, which has been involved in relocating refugees worldwide.

“New arrivals continue to stream in and this is causing a major problem in terms of services rendered,” she stated in an email interview with The Real Truth. “There is insufficient land to build shelters, water sanitation is dire, and everyone is cramped!”

Dadaab, one of the oldest and largest refugee camps worldwide, receives displaced persons at a rate of up to 1,000 daily. Houses cobbled together with sticks, pieces of rope and cloth, and even plastic bags serve as makeshift homes, and residents often live in 10-by-10-foot spaces with eight or more people—and have to share one public toilet with up to 200 others.

Refugees raised their entire lives in the camp face bleak circumstances, unless they are moved elsewhere.

“Those that flee today or currently will have to wait in the camps for some solution, the best being resettlement as return and reintegration is not an option at present,” Ms. Jaber wrote. “Others are being resettled to Canada, Australia, Scandinavia, Europe but the numbers are far too large for all to be resettled at any given time. Those that flee may not have a rosy future but they will be safer in the camps than back in Somalia amidst the war...”

The spokesperson for the United Nations High Commissioner for Refugees (UNHCR), Andrej Mahecic, said in a public statement that given the unstable situation in Somalia, most refugees cannot return home.

“The continued abductions, killing and intimidation of aid workers and the pillaging of humanitarian facilities and supplies, is making it increasingly difficult to reach and access the needy population,” he said. “The situation is having an adverse impact on delivery of aid to internally displaced people (IDPs) who are in dire need of humanitarian assistance.”

In response to the crisis, the Kenyan government requested the relocation of 50,000 refugees to a camp in Kakuma, to the northwest, but due to financial constraints, only 12,700 can be moved.

“This will hardly make a dent in the congested camp,” Ms. Jaber wrote of Dadaab, leaving it well over its maximum capacity.

Earlier this year, Refugees International reported that the camp has failed to provide even the most fundamental human needs.

“The overcrowding means that international standards for basic services are not being met,” the non-governmental organization said. “There is a shortfall of 36,000 latrines and 50 percent of the refugees have access to less than 13 liters of water per day.”

BBC News reported that most refugees no longer believe they will ever return home.

“I have no hope of returning now,” a Somali father said, who has lived in the camp for 18 years. “I have to stay here. Every day there are 500 new arrivals, so it shows you that there is nothing to go back to. People are still leaving. Nobody is going back and I don’t think I ever will…There is a severe shortage of water, and the food ration is not enough for everyone. It is very hard here.”

He continued, “It is especially difficult for the young people because there is no future for them here. There are no jobs, no industry, and no hope” (ibid.).