This website requires the use of Javascript to function correctly. Performance and usage will suffer if it remains disabled.
How to Enable Javascript
Riots in Athens Escalating 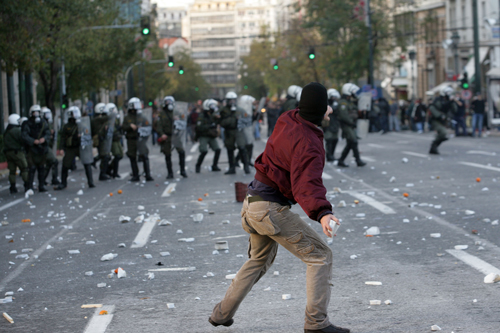 Milos Bicanski/Getty Images
A protester prepares to launch a rock against police during riots in the streets of Athens, Greece (Dec. 18, 2008).

Three weeks of riotous protests tore through Greece’s capital after the fatal police shooting of a 15-year-old boy Dec. 6. The violence and destruction has cost Athens an estimated $1 billion.

So far, the riots have injured dozens, with more than 300 arrested and over 500 shops damaged in Athens.

Protests quickly turned political, as self-described anarchists, and other masked militants who had been marching behind the demonstrators, blamed Greece’s government and the capitalist system. Rioters hurled oranges, rocks and firebombs at the police, smashed store fronts, and set ablaze cars, trash cans and outside cafe furniture.

As the riots continued for weeks, journalists and politicians questioned if there were a deeper cause for the violent unrest—mainly pointing to the current financial crisis and fearing violent protests would spread throughout Europe.

Robert D. Kaplan pointed out in an article for The Atlantic that youth unemployment is at 25-30% for Greece and poverty is rampant. These points, coupled with a government unable to accomplish much due to a deadlock in parliament, make this a “ripe period for protests.”

In closing the article, Mr. Kaplan said, “Pay close attention to Greece; at a time of world-wide economic upheaval, it might eerily presage disturbances in 2009” (ibid.).