This website requires the use of Javascript to function correctly. Performance and usage will suffer if it remains disabled.
How to Enable Javascript
G-8 Agenda: Oil, Food and Global Warming 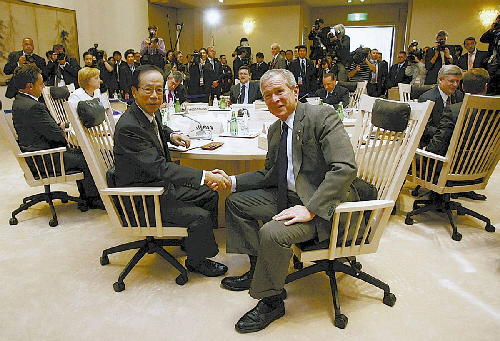 The G-8 said North Korea should disclose its full nuclear inventory and cease its nuclear program.

Meanwhile, Iran steadily maintains that its nuclear program is for peaceful purposes—a claim the G-8 members refused to believe. The Group of Eight offered Tehran a program of incentives and disciplinary actions in exchange for halting its nuclear ambition, a proposal the Iranian government said it is mulling over.

To counter skyrocketing oil prices, the G-8 nations proposed that the United States should prop up the American dollar and that oil-producing countries should boost output. It was suggested that investment in oil exploration should be increased. Searching for sustainable biofuel supply was considered, but members agreed it should be evaluated in line with food production.

The G-8 leaders were split on what actions should be taken in tackling Zimbabwe’s controversial presidential election. Few countries approved Robert Mugabe’s return to office, an election U.S. President George W. Bush labeled a sham. Though G-8 leaders favored arms embargoes and financial actions, the African Union, headed by Tanzania’s President Jakaya Kikwete, said power sharing was the answer and the problem can be dealt with locally.

However, G-8 leader did develop a plan to solve global warming, with the goal of curbing greenhouse gases by 50% in 2050, a figure the G-8 reached last year. “The United States for the first time joined the major industrialized countries…in committing to try to halve greenhouse-gas emissions by 2050—a move criticized by many environmental groups as being not enough” (Washington Post).

“The G-8 ‘have failed the world again,’ Daniel Mittler, Greenpeace International’s climate expert, said in a statement. ‘While the Arctic is melting, the G-8 are postponing action. Instead of climate protection, the world got nothing but flowery words’” (ibid.).

The U.S. said the G-8 has reached significant progress solving greenhouse emissions, but both developing and industrialized nations should participate. This sentiment is not shared by India and China, which both cite they should confront more pressing domestic problems. The United States and China are the world’s largest contributors of greenhouse gases.

To alleviate the current food crisis, the summit pledged to contribute $50 billion, of which $25 billion will go to Africa to help double the continent’s agricultural production. The G-8 also urged nations with vast foodstuff reserves to release food.

As the Group of Eight met, hundreds of protesters—both local and international—marched to Sapporo, the nearest city to Toyako, to decry what they viewed as the lack of genuine measures provided by the G-8 leaders.

President Bush hailed the summit as a “glowing success,” but critics said this was only “window dressing.”

Among the other nations that attended the summit were leaders of the five largest emerging economies: Mexico, China, India, Brazil and South Africa (known as the G-8+5).