This website requires the use of Javascript to function correctly. Performance and usage will suffer if it remains disabled.
How to Enable Javascript
EU Lisbon Treaty Derailed by Irish “No” 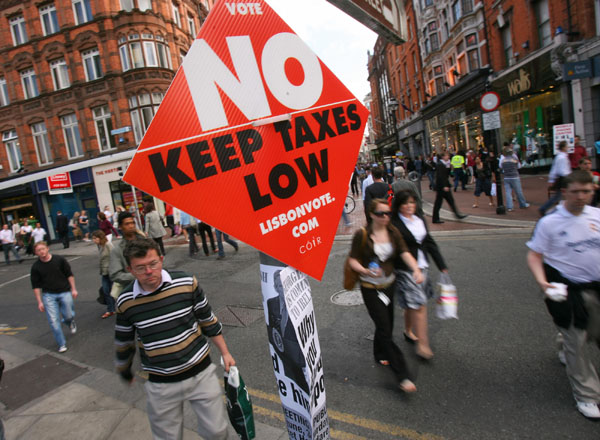 Photo: Peter Muhly/AFP/Getty Images
Pedestrians on a busy street in Dublin city center walk by a sign calling on them to vote “no.”

Europe waited with bated breath for the results of the Irish referendum, which decided the fate of the Lisbon Treaty—a document drafted to further unite Europe into a more tightly knit governing body, presumably more able to tackle global challenges. All other 26 European Union member states left approval to their parliaments, with Ireland being the only nation to hold a referendum.

Those on both sides of the issue led strong campaigns. Opponents canvassed Ireland with arguments that the treaty would bring higher taxes or would “drag the Irish into other people’s wars.” Irish Prime Minister Gerry Adams accused the opposing campaign of “sheer inaccuracy and absurdity,” and said this was the best deal that the EU could offer (BBC).

If Ireland had approved the Lisbon Treaty, it would have:

The treaty is a less ambitious version of the 2005 constitution that was tabled because of a “No” vote from France and the Netherlands. The purpose for slimming down a previous draft of the EU constitution was to avoid situations such as the one in Ireland. EU leaders knew that if referendums were held throughout the 27 member states, they would all struggle to secure a “Yes” vote.

The Irish referendum effectively vetoed the treaty and removed much of the momentum toward the unity the EU has mustered during the last year. However, this is not the first time Ireland has voted “No.” In 2001, the nation voted against the Treaty of Nice, yet passed it a year later after a controversial second vote.