This website requires the use of Javascript to function correctly. Performance and usage will suffer if it remains disabled.
How to Enable Javascript
Concerns Mount as Fuel Strikes Continue Across Europe 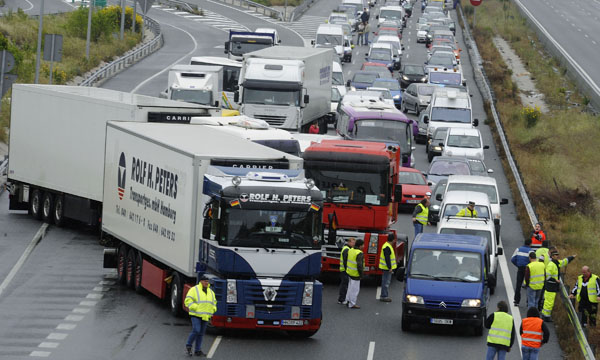 European authorities were on high alert after two truck drivers were killed during several violent protests against rising diesel prices across the continent.

In the city of Granada in southern Spain, a van trying to plow through a picket line ran over a protesting truck driver. Another truck driver was killed in Portugal while reportedly trying to stop a truck from passing through a barricade north of the Portuguese capital, Lisbon.

According to BBC News, the price of diesel has risen by more than 20% this year and truckers are upset at the government’s refusal “to enforce a minimum price for haulage, to prevent firms being undercut.”

The demonstrations have forced Europeans to stockpile food items as trucks carrying supplies have not been able to pass through barricaded roadways.

In Portugal and Spain, traffic came to a crawl as slow-moving truckers blocked lanes or stopped their tractor-trailers in the middle of highways, posting signs on their vehicles to protest the fuel prices or forming barricades that did not permit other vehicles to pass though. Desperate haulers burned trucks while firefighters tried to extinguish the blazes. The Spanish newspaper El Pais reported that one driver suffered severe burns after his truck caught fire while he was sleeping.

Countries across Europe reported similar clashes, though not as violent. In Bulgaria, 150 drivers formed a convoy outside the nation’s capital, Sofia, while in France taxis and truck drivers blocked a roadway in Paris. Even truckers in Britain blocked roads in London to protest rising oil prices. To compensate for gas prices in the United Kingdom, the government recently imposed an additional 3.5% surcharge on cab fees, according to The Guardian.

The weeklong protests joined with the month-long fishermen’s strike across Europe, which has all but paralyzed the fishing industry.

Since 2005, the European Commission agreed not to sway from its previous stance against changing the tax. BBC News reported that EU finance ministers agreed that they would not use tax cuts to deal with augmenting oil prices, as it would encourage oil producers to increase prices and compromise the European Commission’s environmental agenda, which aims to cut greenhouse gases significantly within the next few years.

However, if strikes increase throughout the continent, the EU Commission may be forced to reconsider.

Across Europe, shelves barren of fresh produce echoed the increasing woes that have plagued the continent. Several countries reported that petroleum stations devoid of gas had to turn away customers hoping to fill their tanks.

In Madrid, Spain’s capital city, many restaurant owners and merchants attempted to buy as many products as they could to keep their businesses in operation.

“I have the trunk of my car filled with cartons of milk,” restaurant owner, Graciela Gomez Torea, said in an interview with The International Herald Tribune. Gomez Torea stockpiled milk for coffee immediately following the strike’s commencement.

While Spain has continued striking, the Portuguese government recently reached an agreement with truckers, effectively ending the strike there after it agreed to give striking truckers’ unions tax relief and reduced motorway tolls.

However, Spain has maintained a more hard-line stance. El Pais reported that Spanish President Jose Luis Rodriguez Zapatero announced that Spain’s government will exercise “zero tolerance” for the strikers. Although he offered truckers emergency credit and early retirement incentives, he said the government refuses to set minimum tariffs for them.

Given the oil price spike, European officials are concerned that future strikes could spread and lead to the same types of potentially desperate situations in other countries.