This website requires the use of Javascript to function correctly. Performance and usage will suffer if it remains disabled.
How to Enable Javascript
Post-Katrina New Orleans: Homeless Rate Rises to 1 in 25

Today, “the city that care forgot” has four times as many homeless people as most U.S. cities.

According to UNITY for Greater New Orleans, an advocacy group, the surge in homelessness is due to four major factors:

The New Orleans Mission, one of the city’s main homeless shelters, has a 150-person limit, which fills each day. In pre-Katrina New Orleans, most mission residents were “chronically homeless and typically jobless” (USA Today). Today, about four in ten work fulltime jobs, yet cannot afford rising rents.

After the 2005 hurricane barreled through New Orleans, the levees broke due to pressure from the storm surge. Floodwaters submerged about 80% of the city, destroying 200,000 homes and 41,000 affordable rental units.

Currently, plans for rebuilding the city call for demolishing four major public housing developments, consisting of 4,500 units. These are to be replaced with mixed-income housing: “…more than 3,200 public housing units and another 1,765 affordable housing units that would service families at or below 80 percent of the area median income,” according to the Housing Authority of New Orleans. “The plan also includes another 1,800 single families that would be market rate and affordable.”

Federal and local officials support razing the four developments, stating that less public housing is needed due to the city’s decreased population. But public housing advocates counter that the plan will only create more homelessness.

From the midst of New Orleans’ housing troubles has come a new term: “homeless homeowners.” These are residents who had paid off their mortgages, but did not have insurance when Hurricane Katrina struck. With their houses destroyed, the owners were left homeless.

HUD—U.S. Housing and Urban Development—announced that New Orleans would receive $27.6 million to produce affordable housing for low-income families, assist first-time homebuyers in purchasing single-family homes, and provide transitional housing for those in need, with the goal of helping the homeless gain permanent housing. 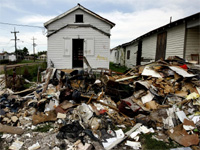 Two Years After Katrina
In August 2005, Hurricane Katrina barreled across the Gulf of Mexico, ripping into the United States Gulf Coast. The storm resulted in 1,577 deaths in Louisiana, as well as insured losses in Mississippi, Alabama and Louisiana totaling more than $40 billion dollars.