This website requires the use of Javascript to function correctly. Performance and usage will suffer if it remains disabled.
How to Enable Javascript
Two Years After Katrina 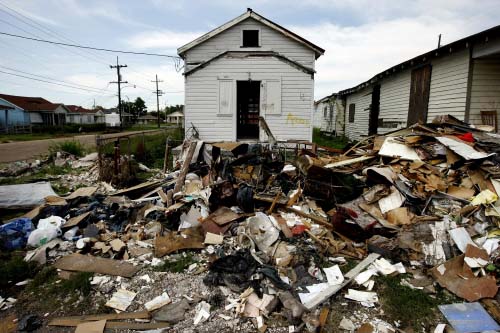 In August 2005, Hurricane Katrina barreled across the Gulf of Mexico, ripping into the United States Gulf Coast. The storm resulted in 1,577 deaths in Louisiana, as well as insured losses in Mississippi, Alabama and Louisiana totaling more than $40 billion dollars.

After the skies cleared and the floodwaters receded, hundreds of thousands of residents were left homeless. Businesses were lost, levees were destroyed and crime escalated to record levels.

New Orleans Mayor Ray Nagin has focused single-mindedly on the devastation Katrina left in its wake, and local politicians have campaigned on virtually nothing else. Yet a myriad of challenges still face “The City That Care Forgot.”

U.S. President George W. Bush recently visited the Gulf Coast for the 15th time, calling the storm-ravaged region a “place of hope.” He then renewed his efforts in pushing for aid and initiatives to assist in recovery.

On August 29, 2007—the two-year anniversary of Katrina’s landfall—U.S. Speaker of the House Nancy Pelosi conveyed the need for continued support for those affected by the hurricane.

“It says in the Bible,” she stated, “that when there is injustice in the world, the poorest and those with the least power are injured the most. It has been the responsibility of people of conscience—particularly elected officials—to help right that injustice…In just seven months we have sent more than $6.4 billion to the region…for significant initiatives such as helping schools recover, bolstering levees, and maintaining health facilities. We have created a new partnership between Congress and the region to keep hope alive with real progress on behalf of Katrina’s survivors.”

Hurricane Katrina: One Year Later—What America Failed to Learn
As homes and lives along America’s Gulf Coast continue to be rebuilt in Hurricane Katrina’s aftermath, there are vital lessons waiting to be learned.

Hurricane Katrina: One Year Later—The Greatest “Katrina” Lies Ahead
An immense “storm” looms over the horizon, amassing strength and rapidly gaining speed as time advances—and the initial effects of this catastrophe-in-waiting are already evident.

Katrina’s Wake-Up Call
Human nature usually ignores warnings—even the most obvious. How many will recognize this wake-up call—or greater ones to come? Then, how many will heed? Read and learn the cause of this disaster, and how everything will change—and soon! While it is always darkest before dawn, hope lies ahead!

In the two years following Hurricane Katrina, billions have been spent and the focus of the government is firmly fixed on the problems facing the city. But what is the current state of affairs in New Orleans?

The cost of rebuilding and sufficiently protecting the city from another “100-year storm” was originally estimated at $7 billion. However, it quickly became evident that more funds were needed. A new budget of $15 billion was approved for the U.S. Army Corps of Engineers, with a timeline that targets completion in 2011.

Under intense political pressure and local scrutiny, the Corps and over 3,300 workers are feverishly building enormous floodgates to secure the hundreds of “finger-like” canals that failed after being overcome by the destructive force of the sea, crippling the city.

According to a recent Corps of Engineers investigation, even though breached levee walls and many miles of floodgates have been repaired, the city’s entire flood system still provides insufficient protection, and the antiquated “patchwork” of levees, flood walls and gates is “a system in name only” (Der Spiegel). 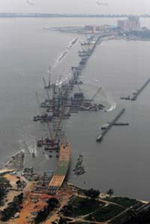 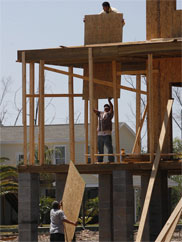 Experts concur that it is a mistake to simply rebuild the previous system. For instance, the failure of just one canal during Katrina led to the destruction of over 40,000 acres of marshland. Robert G. Bea, professor of engineering at the University of California, Berkeley, said, “We have spent a lot of money and gotten some very good patches, but we’re putting them on this decayed old quilt” (ibid.).

Adding to the complexity, many believe that the reconstruction has been financially influenced and motivated by factors such as race and the economic standing of certain communities, leading to infighting among local residents and accusations of government corruption.

The U.S. Postal service reports that the number of people receiving mail has reached two-thirds of pre-Katrina levels. However, there are still large working class neighborhoods in which fewer than 5% of residents have returned. Though there are visible signs of recovery, for every rebuilt house there are scores that remain abandoned and boarded up. Many still reside in FEMA trailers, with no access to gas or hot water.

More than 4,000 businesses in New Orleans vanished in the year after the disaster. Despite over 3,500 businesses having received financial grants from the state, only 72% of the employer base has returned. The region’s employment base has recovered to 83% of its 2005 levels, yet this is still over 100,000 fewer jobs than before the calamity struck.

To further exacerbate the problem for working class and lower income residents, government subsidies will help rebuild only 25% of the city’s affordable rental housing, making it difficult for many to return to New Orleans and survive financially.

Stagnant economic recovery has resulted in limited jobs, and significantly reduced levels of available housing have contributed to the sobering fact that there are still 40,000 New Orleans families displaced outside of Louisiana. Although employment levels have now returned to over 80% of pre-storm levels, it is clear that many are uncomfortable returning with their families. Only 40% of New Orleans public school students have re-enrolled (ibid.).

A 65-page August 2007 report examined the healthcare status of New Orleanians since the storm. The results were not encouraging: 43% of adults reported problems with access to healthcare in the last two years, and the rate of the uninsured is now 20%, well above the national average.

The president and CEO of the National Council for Community Behavioral Healthcare stated that despite supposed infusion of funds and federal aid into the system, “We still don’t have adequate staff and resources to meet this overwhelming human need.”

Crime of all types has inundated an already overwhelmed criminal justice system in New Orleans. 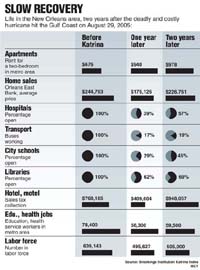 One of the most poignant examples of the human toll exacted on New Orleans is the “murder board” that lists the names of each victim, publicly displayed by a local church. Every Monday morning, the minister sends a single red rose to both the mayor and the city’s police chief as a grim reminder of each casualty from the previous weekend.

Why do all of these problems continue to persist when the best and brightest minds, financed with billions, are doing all they can to find immediate solutions?

Can the federal government bring real remedies to the region?

If the two-year progress report on the current state of affairs is any indication, the problem will continue to grow worse.

The problems plaguing mankind cannot be solved by the collective efforts of existing local and national governments.

However, there is a government that will ultimately bring real solutions—the kingdom of God!

Katrina’s Wake-Up Call
Human nature usually ignores warnings—even the most obvious. How many will recognize this wake-up call—or greater ones to come? Then, how many will heed? Read and learn the cause of this disaster, and how everything will change—and soon! While it is always darkest before dawn, hope lies ahead!