This website requires the use of Javascript to function correctly. Performance and usage will suffer if it remains disabled.
How to Enable Javascript
Sports Violence: Human Nature Exposed!

Observing the negative elements of human nature can be accomplished easily and almost continually today. Watch the news or almost any program on TV and you will see several examples of murder and adultery. Drive down the main street of any town or city in the world at night and you will likely witness drunkenness and debauchery. Reflect on the discussions and interests of your co-workers and, generally, they will revolve around the titillation and addiction-like fascination of the strange and perverse.

Increasingly, this is also becoming evident in the world of sports. This part of life was once considered important for exercise, relaxation and clean fun; yet today, one would be hard-pressed to experience the latter two while watching or participating in a sporting event. Increased competition has brought incredible violence and even murder by fans, players, players’ parents, coaches and owners. And endless greed has led to gambling addictions and performance-enhancer scandals—elements that were once common only to criminal gangs and thugs. Consider the following recent events.

The soccer world entered qualifying competitions amidst the following violence, according to an International Herald Tribune article:

In the world of cricket, top coach Bob Woolmer was apparently murdered after Pakistan, the team he was coaching, was beat by Ireland in the first round of the World Cup. The Associated Press reported that after days of speculation, Kingston, Jamaica’s police commissioner confirmed that the pathologist declared the cause of death was “asphyxia as a result of manual strangulation.”

In the meantime, the International Cricket Council’s anti-corruption unit is investigating whether “match-fixing” had anything to do with Mr. Woolmer’s suspected murder.

The violence occurring in sports stands as a testament to society’s degenerating condition and the mental state—and character!—of the average person.

Yet the above are just four recent examples! Recall the following: recent scenes of fans celebrating their team’s victory by destroying parts of their own city in a drunken haze; a college team in turmoil due to a rape scandal; hockey parents attacking coaches, referees and each other for perceived injustices; endless lies and cheating in the use of performance-enhancing—and body-destroying!—drugs.

How will the average person react when real calamity strikes—the kind that affects whole nations, or many nations?

You may wish to read our article “What’s All the Rage About?” to learn more about the rise in sports violence. 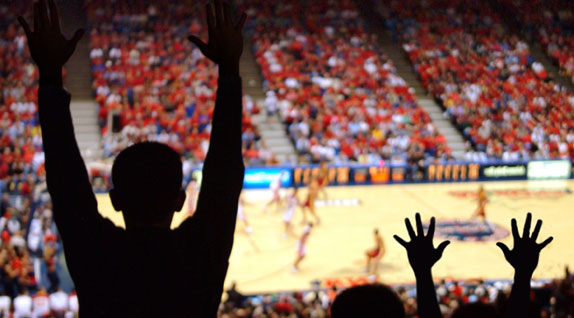 What’s All the Rage About?
Numerous recent headlines suggest that sports violence is on the rise. Why? Is it just “part of the game”? Or is it an indication of something bigger?