This website requires the use of Javascript to function correctly. Performance and usage will suffer if it remains disabled.
How to Enable Javascript
“Jesus’ Tomb” – Part 2 – Can Christ’s Body Be Discovered?

Can Christ’s Body Be Discovered?

Yet the Church was in the midst of an even greater controversy 2,000 years ago: Will Christians be resurrected from the dead?

The apostle Paul had to address this terribly confused thinking: “Now if Christ be preached that He rose from the dead, how say some among you that there is no resurrection of the dead? But if there be no resurrection of the dead, then is Christ not risen: and if Christ be not risen, then is our preaching vain, and your faith is also vain” (I Cor. 15:12-14).

The hope of Christianity hinges on whether Christ was resurrected from the dead, and whether Christians will also be resurrected. “For if the dead rise not, then is not Christ raised: And if Christ be not raised, your faith is vain; you are yet in your sins. Then they also which are fallen asleep in Christ are perished. If in this life only we have hope in Christ, we are of all men most miserable” (vs. 16-19).

Throughout the rest of the chapter, Paul confirms that Christians will be resurrected—instantly changed from mortal flesh to immortal spirit (vs. 51-53). Old Testament figures such as Job wrote about this hope: “If a man die, shall he live again? All the days of my appointed time will I wait, till my change come” (Job 14:14)—a hope that will be fulfilled upon Jesus Christ’s Return (I Thes. 4:13-17).

But How Was Christ Resurrected?

In regard to the film, when asked if the discovery of Jesus’ bones would shake their Christian beliefs, religious leaders were largely divided into two camps.

On one side were those who asserted that Christ spiritually rose from the dead—that He was transformed into some kind of ethereal figure who left behind His physical shell. But this idea is contrary to the Bible—both Old Testament and New.

Luke 24 records the account of when some of Jesus’ followers went to visit His tomb, only to discover that the large stone covering the entrance was rolled aside (vs. 1-2). “And they entered in, and found not the body of the Lord Jesus” (vs. 3). These followers were met by two “men” (angels in parallel gospel accounts), who told them Jesus had already risen from the dead (vs. 4-7).

A Messianic prophecy provides the key as to why Christ’s physical body could not be found. Notice: “For You will not leave My soul [body] in hell [the grave]; neither will You suffer Your Holy One to see corruption” (Psa. 16:10). Jesus’ physical corpse was not allowed to decay—it only existed for three days, after which He was resurrected with a spirit-composed body. (Of course, Jesus was able to manifest Himself in the flesh – John 20:27.) Jesus’ bones cannot be discovered because they no longer exist!

Think. Human beings by the millions have a propensity to worship religious relics, including statues, pictures—and bones! The Bible calls idolatry one of the “works of the flesh” (Gal. 5:19-21). Idolatry is inherent in human nature.

In light of this, God would not allow the bones of His Son to be left behind, as men would have surely made them into an idol.

Now let’s address the other camp of religious leaders, those who believe Jesus was physically resurrected, thus taking His body with Him to heaven. I Corinthians 15:51 states, “Behold, I show you a mystery…” Indeed, this does seem to be a “mystery” to millions who do not understand the resurrection of the dead—the most basic understanding of what happens in regard to salvation.

Paul continues: “…we shall not all sleep, but we shall all be changed, in a moment, in the twinkling of an eye, at the last trump: for the trumpet shall sound, and the dead shall be raised incorruptible, and we shall be changed.” This occurs at Christ’s Return.

Paul made plain that Christ also, therefore, “was made a quickening spirit” (vs. 45), and later states, “Now this I say, brethren, that flesh and blood cannot inherit the kingdom of God; neither does corruption inherit incorruption” (vs. 50).

Despite such clear passages showing that Christ was NOT physically resurrected, millions are confused and deceived. Consider this email recently received by The Real Truth:

“Why is everyone so against finding [the] Jesus Tomb? It has to be somewhere. Jesus’ body has to be on earth, it could not have physically gone to heaven. Our universe is at least 26 billion light years big, and even if his body traveled at the speed of light, he would still be traveling for 26 billion light years more (minus 2,000 years). The body would not survive the minute it got out of the atmosphere for lack of oxygen.”

A physical being cannot surpass or even match the speed of light. However, a being made of spirit—which, by its very nature, exists outside the physical limitations of gravity, speed, distance, etc.—can instantly travel to God’s heavenly throne and back! Clearly, Christ was resurrected as a Spirit Being, and His appearance, described in Revelation 1:13-16, is certainly not that of a mortal man.

Some are confused by passages such as John 20 (referenced earlier), in which “doubting” Thomas felt the resurrected Christ’s hands and side. Christ manifested the wounds in a physical body only because He chose to do so. He had the ability to physically manifest Himself at will. In that very same account, He suddenly appeared in their midst—even though the windows and doors were shut! This could not have happened unless Jesus was a Spirit-Being. Physical bodies cannot walk through walls!

For the dedicated Bible student, this should not be a surprise. Angels, who are created spirit-beings, can manifest themselves into the physical as well. In Genesis 19, two angels literally took hold of Lot and his family to save them from Sodom’s destruction: “…the men laid hold upon his hand, and upon the hand of his wife, and upon the hand of his two daughters; the Lord being merciful unto him: and they brought him forth, and set him without the city” (vs. 16).

Surely the resurrected Jesus Christ would have the ability to do the same, and more!

The original broadcasting of The Lost Tomb of Jesus averaged more than 4.1 million viewers, Discovery Channel’s largest audience since September 2005. Yet the film’s reckless, “fast and loose” usage of circumstantial and inconclusive evidence brought harsh criticism from secularists and religious believers throughout the world, which (despite denials from a network representative) drove Discovery to pull back from promoting the documentary. Further, the network is not promoting the huge ratings it received during its showing of the documentary.

Ironically, although millions watched the film, the majority was most likely ignorant of what is written in the pages of the world’s best-selling book, the Holy Bible—whether about Jesus Christ or any other subject.

Incredible! No wonder theologians and religionists disagree as to the nature of Jesus Christ’s resurrection. Like Nicodemus, few—even those who profess to be followers of Christ—understand what Jesus meant by the phrase “born again” (John 3). Even fewer know passages such as I John 3:2 and Philippians 3:20-21, which reveal that true Christians, upon being resurrected, will actually appear as Christ does in Revelation 1:13-16.

If you would like to learn the plain answers to questions that have confused millions, read the booklet What Does “Born Again” Mean? 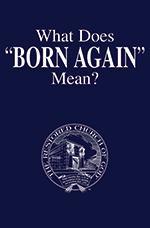 What Does “Born Again” Mean?