This website requires the use of Javascript to function correctly. Performance and usage will suffer if it remains disabled.
How to Enable Javascript
Record U.S. Trade Deficit

It is no coincidence that the same week the U.S. government reported the burgeoning American trade deficit set a record for the fifth consecutive year in 2006, federal officials also reported that international purchases of U.S. long-term securities in December dropped the most in nearly five years.

Both developments are frightening investors, putting downward pressure on the American dollar’s value and stoking fears that inflation will reignite.

What this means for the average citizen is they could see the Federal Reserve raise interest rates to bolster the dollar and attract foreign buying of U.S. Treasuries, making it more expensive to finance mortgages, purchase vehicles and appliances, and acquire bank loans.

On Tuesday, February 13, the Commerce Department said America’s trade deficit rose to $764 billion in 2006 as imports outstripped exports at a record pace for a fifth straight year, reflecting a huge jump in America’s foreign oil bill and a record imbalance with China. In December alone, the deficit rose a worse-than-expected 5.3% to $61.2 billion.

The gap between what the United States sells abroad and what it imports was 6.5% more than the 2005 record of $716.7 billion. The Atlanta Journal-Constitution reports, “The United States has now run a trade deficit for 31 consecutive years. In the past five, the deficit has surged 110 percent while, in that same time, the economy has grown about 32 percent.”

White House officials said that President George W. Bush would continue to pursue a strategy of opening foreign markets to U.S. goods, rather than erecting protectionist barriers to keep out imports.

The Bush administration is coming under increasing fire from Democrats, who now control both houses of Congress, to open foreign markets to American goods, protect American products from piracy and counterfeiting, and help U.S. industry become more competitive. Consumer, environmental and labor groups have called on Congress to let the president’s trade negotiating authority expire and to reject various pending trade deals.

“The consequences of these persistent and massive trade deficits include not only failed businesses, displaced workers, lower real wages and rising inequality, but also permanent devastation of our communities,” Democratic lawmakers said in a letter to Mr. Bush. They noted that more than three million manufacturing jobs have been lost since the president took office, with about one-third of those losses attributed to a rising deficit in manufactured goods.

The U.S. trade deficit with China, which soared 15.4% last year to $232.5 billion, was the largest ever recorded by any single nation. A bipartisan bill introduced on Tuesday, February 13, would rescind China’s Permanent Normal Trade Relations status. Another new bill, the Fair Currency Act of 2007, classified China as a currency manipulator in violation of U.S. trade law. A retaliatory tariff boost is threatened under this bill. If trade barriers are erected, cheap foreign imports could shrink, shortages could occur, and the cost of living could escalate.

The huge trade gap means that the United States effectively borrows about $2 billion each day to finance consumption. The U.S. relies heavily on foreign investment to finance its deficit budget spending as well. Foreign investors own about half of the $4.3 trillion in outstanding Treasuries.

On February 15, the U.S. Treasury Department reported net foreign acquisition of long-maturity U.S. securities, or net capital inflow, plunged to $15.6 billion in December, down 82% from $84.9 billion in November—the lowest monthly amount since July 2000 and nowhere near enough to cover the country’s trade deficit for that month. Some analysts said this shows a danger in America’s ability to finance its trade and budget deficits.

Net capital inflow represents money flowing into the U.S., while the U.S. trade deficit represents money flowing out of the country. Japan remained the largest holder of U.S. Treasury securities, with its holdings rising $6.9 billion in December to $644.3 billion. China remained the second-largest holder of U.S. Treasuries; its stake rose $3.1 billion to $349.6 billion.

“A specific concern, said Mitul Kotecha, head of global currency research at Calyon Corporate and Investment Bank, is that foreigners sold a net $11.6 billion in U.S. stocks in December, a reversal from net purchases of $7.0 billion in November” (International Herald Tribune).

The Treasury report triggered an almost immediate drop in the dollar’s value, which fell to a six-week low. The dollar is sensitive to foreign demand for U.S. assets because increasing amounts of foreign capital are needed to finance the country’s external deficit.

The risk to the dollar is that investors will shift their short-term deposits into other currencies if official interest rates begin falling in the U.S., making investments more profitable elsewhere. “Any way you look at it, this was quite unexpected,” said Ashraf Laidi, chief currency strategist at CMC markets.

To learn more about the impact of America’s rising debt, you may wish to read The Real Truth article “A Crushing Mountain of Debt.” 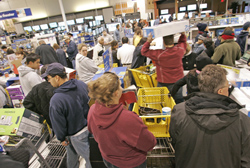 A Crushing Mountain of Debt
With another Christmas shopping season ended, many people find themselves entering 2007 with the daunting prospect of digging out from under a pile of consumer debt brought on by frenzied buying. Once again, their December binge has turned into a throbbing January hangover!