This website requires the use of Javascript to function correctly. Performance and usage will suffer if it remains disabled.
How to Enable Javascript
After Ukraine, Is Taiwan Next? – What Matthew 24:6 Reveals

After Ukraine, Is Taiwan Next?

While recent news events give some clues as to what will happen next on the world stage, Bible prophecy highlights the trends you should really be watching. 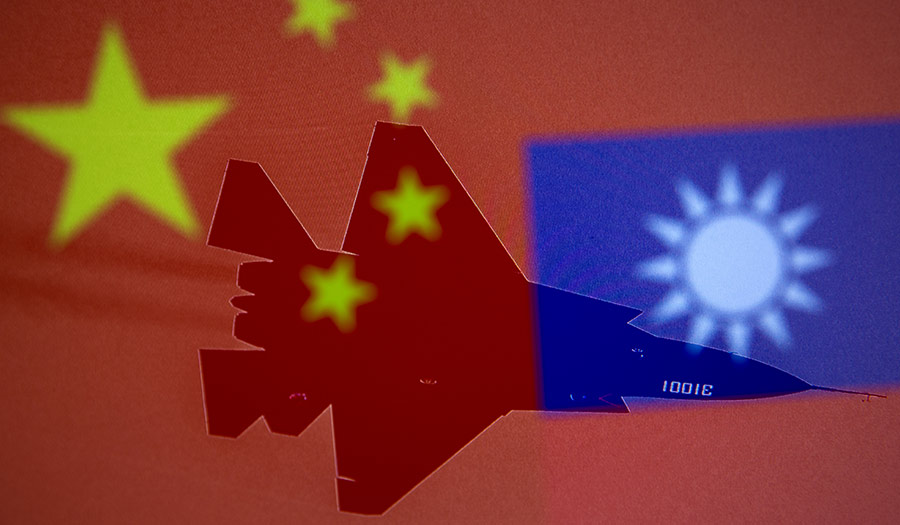 Reuters/Dado Ruvic
Chinese and Taiwanese national flags are displayed alongside a military airplane in this illustration made April 9, 2021.

China is serious about its mission to establish “reunification” with Taiwan. The question is this: Will Beijing order an invasion into the neighboring island a la Russia with Ukraine?

Since the turn of the year, the Asian nation has deployed a record number of military planes over Taiwan’s waters, had its navy hold live-fire drills dangerously close to Taiwan’s territory, and took other aggressive steps to show dominance in the contested South China Sea.

China views Taiwan as a breakaway province, while Taiwan considers itself a sovereign state. Throughout the 20th and 21st centuries, Beijing-Taipei relations have been tense. Yet China’s recent provocations, made in the shadow of Russia’s invasion of Ukraine, have raised the specter of a conflict that could possibly breakout into a larger war with regional powers and the United States.

This is all Matthew 24 playing out in real time. Jesus Christ was asked by his disciples what the world would look like just before His return at the end of the world (vs. 3). His answer? “And you shall hear of wars and rumors of wars” (vs. 6).

As Ukraine has the potential to be a war unlike anything seen since World War II, Taiwan certainly qualifies as a rumor of war—one with global implications.

Taiwan knows this. Defense Minister Chiu Kuo-cheng told lawmakers this month that China could draw lessons from the war in Ukraine and “speed up” their pace of any assault on Taiwan, perhaps attacking the outlying islands and at the same time starting precision missile strikes on targets in Taiwan, while sending troops across the strait.

“But why have they not done it?” he asked. “Because they want to make sure that they can settle everything with one strike.”

One senior U.S. defense official told a Senate hearing that Ukraine’s stiff resistance against the invasion by Russian forces could even be a model for Taiwan to defend itself should China choose to violate the island’s “sovereignty” by attacking.

The U.S., like most countries, does not have formal ties with Taiwan but is its main arms supplier, and has long urged it to buy cost effective and mobile defense systems to counter China’s more powerful military.

“I think the situation we’re seeing in Ukraine right now is a very worthwhile case study for them about why Taiwan needs to do all it can to build [defensive] capabilities, to get its population ready, so that it can be as prickly as possible should China choose to violate its sovereignty,” Mara Karlin, Assistant Secretary of Defense for Strategy, Plans and Capabilities, said.

Under the United States’ “one China” policy, Washington only acknowledges China’s stance that the island belongs to it, but takes no position on Taiwan’s sovereignty.

Back to Matthew 24. Understand what Jesus was saying: Wars and rumors of wars would dramatically crescendo just before the end of this age. Another way to say this is Christ instructed us to study world conditions to discern the signs of the times.

Why Is China Fixated on Taiwan?

On top of being a prophetic trend, China’s interest in Taiwan runs deep. China’s President Xi Jinping often speaks of the mainland’s mission of “reunification” with Taiwan, as well as the Chinese people’s “glorious tradition” of opposing separatism. In doing this, he is referencing the intertwined history with the island only 100 miles from the mainland’s coast.

“Taiwan’s official name is the Republic of China (ROC), tracing its founding to 1911 on the Chinese mainland after the collapse of China’s last imperial dynasty,” 9News Sydney reported.

“The Nationalist Party, or Kuomintang (KMT), ruled China until 1949 when it was defeated by the army of the Communist Party of China (CPC) in a bloody civil war and fled to Taiwan, an island off the southeastern coast of mainland China.

“Later that same year, Communist leader Mao Zedong declared the birth of the People’s Republic of China (PRC) from Tiananmen Gate in Beijing.

“The two sides have been governed separately since, though a shared cultural and linguistic heritage mostly endures—with Mandarin spoken as the official language in both places.”

Their shared history is why China bristles at any reference to democratically self-governed Taiwan as independent. Beijing’s ambassador to Washington warned in January that U.S. encouragement of independence could trigger a military conflict between the two superpowers.

Despite the heightened tensions in Southeast Asia, many experts argue it is unlikely China will actually stage a full-scale invasion of Taiwan. For one, China has avoided large-scale combat operations since its invasion of Vietnam in 1979, and President Xi claimed in 2021 that reunification with Taiwan would be achieved through “peaceful” means.

Yet the provocations and saber rattling—although only reports of potential conflict—fit perfectly Christ’s prophetic picture of today.

Look back at His statement in Matthew 24:6. Notice wars and rumors of wars are mentioned as different kinds of events. War unlike the world has seen since 1945 has broken out—the invasion of Ukraine is the largest land incursion in Europe since World War II. But rumors of war were also foretold to increase. Tensions between China and the U.S. over Taiwan is just one example. There are also reports of Myanmar’s government army increasing attacks against civilians—which former Army Ranger and longtime relief worker in the Southeast Asian nation David Eubank described as the worst since World War II.

These events match Christ’s prophecy of what today would look like. Yet recall the important reason He wanted us to look out for reports of wars and rumors of wars. It is tied to the most important piece of news Christ brought during His time on Earth.

In the same passage, Christ described the “gospel of the kingdom” (vs. 14). Gospel is an old English word that simply means good news. In effect, wars and rumors of wars is the bad news that points to the ultimate good news of the Kingdom of God.

Before the Kingdom arrives, however, other world events are prophesied to grow worse. Jesus outlined in Matthew 24 what we should look out for in the time leading up to His return, including natural disasters, diseases and violence. Watch for these conditions to continue getting worse—because they signal God’s intervention is getting close!

Our booklet How God’s Kingdom Will Come – The Untold Story! explains why this is good news—the best news possible—for a world that is increasingly steeped in war and worry, as well as provides more detail on what to look for as it approaches.

This article contains information from Reuters.