This website requires the use of Javascript to function correctly. Performance and usage will suffer if it remains disabled.
How to Enable Javascript
The Christmas Tree – Behind the Rise of a Holiday Icon

Behind the Rise of a Holiday Icon

Most cannot picture a holiday season without decorating an evergreen in their living rooms. Yet few know why this practice is so popular. 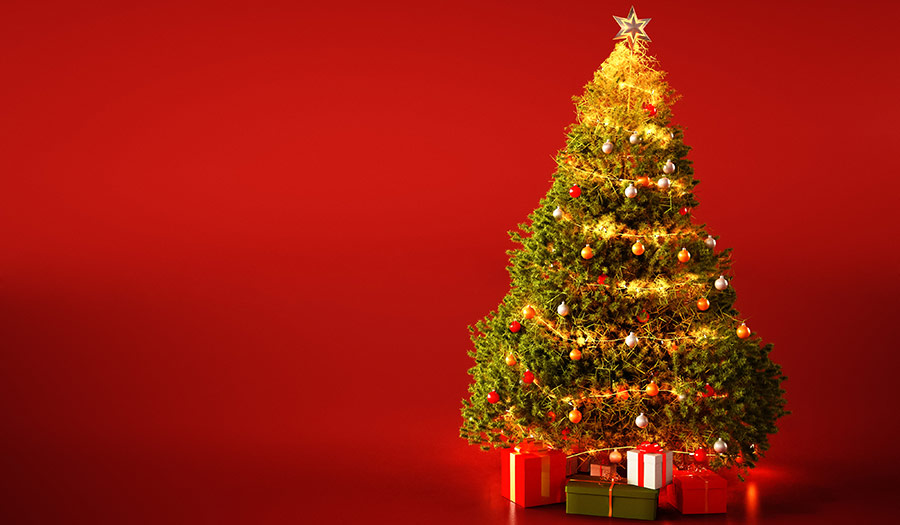 In the crisp evening air, a military band plays along with a chorus of local singers. Everyone in the large crowd has their eyes fixed on the huge evergreen tree prominently displayed before them. The event is the lighting of the National Christmas Tree, an annual celebration in the United States capital of Washington.

With all the pageantry, music, and civic dignitaries, the countdown to the lighting of the giant tree is a celebration for citizens, rich and poor, young and old.

The ceremony began nearly 97 years ago when President Calvin Coolidge lit a 48-foot balsam fir from Vermont. On that Christmas Eve in 1923, the tree lit up with 2,500 red, white and green electric bulbs. The tree lighting ceremony remains a beloved holiday tradition. But it has not always been this way.

For many today, it would be hard to imagine winter holidays without an evergreen in their living room, brightly decorated with lights and colorful ornaments. The assumption would be that the Christmas tree has always been venerated in the United States. But the surprising truth is that through most of U.S. history this was not the case. George Washington, Thomas Jefferson, and many early American leaders never put up Christmas trees in the nation’s capital. President Theodore Roosevelt, an avid outdoorsman and environmentalist, banned Christmas trees from the White House during his presidency, fearing it would contribute to deforestation. Every Christmas day during Abraham Lincoln’s administration was just a normal workday.

The answer comes from across the Atlantic Ocean in Britain. The most iconic symbol of Christmas was not a part of English tradition until around the 1840s. This changed when German Prince Albert married Queen Victoria in 1840. In 1846, Queen Victoria and her husband were seen in a sketch standing with their children around a Christmas tree at Windsor Castle, which appeared in the Illustrated London News. Up until that point, decorating fir trees was an obscure custom practiced in a few Germanic countries. During the queen’s lifetime, English Puritans condemned the practice and preached against “the heathen traditions” of merrymaking, singing carols, and decorating trees.

Unlike the previous royal family, Queen Victoria was extremely popular in Britain. What she did in her home immediately became fashionable in Britain—but also with fashion-conscious women in American society. Soon after Victoria started celebrating with fir trees as a favor to her German husband, ordinary citizens followed suit. Given the family-focused culture of the era, it did not take long before Christmas trees became a key component of holiday celebrations for working-class families.

Still, through much of the 19th century, decorating trees in December was frowned upon in the U.S. Puritan leaders throughout New England banned the tree altogether, considering it a symbol of “heathen idolatry.”

It was not until after a large influx of German and Irish immigrants in the late 19th century that Puritan influence waned. Eventually, similar to what happened in England, American civic leaders, artists and authors played a role in changing how citizens viewed the custom.

The image of a happy working-class family exchanging gifts around a tree became a popular theme. This family-oriented symbolism replaced images of more decadent Christmas customs, such as binge drinking and partying. The theme of family gathering around the tree was further pushed into popular thinking by Clement Moore’s poem “‘Twas the Night Before Christmas.” Though the poem was written in the early 1800s, it swelled in popularity over time.

The Christmas tree has come a long way since its obscure beginnings. Today, in the U.S. alone, 30 million trees are sold annually with an additional 10 million artificial ones sold. Every year, 350 million Christmas trees are grown on farms in the United States, a $1.2 billion industry.

The history of the tree predates modern history—its roots lie in ancient practices and rituals.

The modern Christmas tree we are familiar with originated in Germany. Records indicate that by 1605, citizens of Strasburg set up fir trees in the parlors of their homes—a practice that was passed down from the Romans, who got it from the Babylonians and the Egyptians.

Even long before Christianity, people used evergreen plants to decorate their homes to celebrate the winter solstice. These evergreen plants served as a reminder of their belief that the sun god, who was “weakened” during the winter, would eventually regain his strength in the springtime.

The Celts in northern Europe decorated their druid temples with evergreen boughs, and the Vikings farther north thought evergreens were the plants of the god of light and peace. Likewise, the Romans marked the winter solstice with a feast called Saturnalia in honor of Saturn, the god of agriculture. They decorated their homes and temples with evergreen boughs in observance of the occasion.

Venerating evergreen trees can further be traced back to ancient Babylon. Historian William S. Walsh wrote in his book Curiosities of Popular Customs: “An old Babylonish fable told of an evergreen tree which sprang out of a dead tree stump. The old stump symbolized the dead Nimrod, the new evergreen tree symbolized that Nimrod had come to life again in Tammuz! Among the Druids the oak was sacred, among the Egyptians it was the palm, and in Rome it was the fir, which was decorated with red berries during the Saturnalia!” (emphasis added).

Nimrod is a figure written about in the Bible whose subjects worshipped him instead of God. He, along with Tammuz—a false god—are both condemned in the scriptures. Christmas’ origins are in worship rites for these two figures!

What Else Does the Bible Say?

Many believe they are honoring the birth of Jesus Christ by keeping their beloved family tradition of decorating the Christmas tree. The problem is this practice is not endorsed by the God of the Bible. It is just the opposite. There are clear instructions against cutting down and decorating evergreen trees.

In Jeremiah 10:2-6, there are instructions that begin saying not to learn the way of the heathen (or unbelievers of God). The verses specifically prohibit “cutting a tree out of the forest” and “deck[ing] it with silver and with gold,” and “fasten[ing] it with nails and with hammers that it move not.” God then mocks these idols saying they stand upright “but speak not” and must be carried “because they cannot go.” He says not to be afraid of this false god that can neither do good nor evil.

It is impossible not to recognize this plain description as a modern Christmas tree. God directly refers to it as “the way of the heathen.”

Take this verse for exactly what it says. God condemns the putting up of pagan (Christmas) trees with this plain Bible command! This is not a harmless, innocent family tradition to God.

Isaiah 9:16 states: “For the leaders of this people cause them to err.” History has proven this time and again when it comes to Christmas tree displays. What started as a virtually unknown or even unusual practice among the people took off in England and America when the leaders began to take part.

This is proof that leaders can influence what we think and do. Artists, authors, presidents, royalty and even Bible experts—who should know better—can shape thinking and promote wrong cultural traditions in society. Succeeding generations, ignorant of the past, follow these traditions, thinking they have been around forever. Eventually, these practices become so ingrained that even plain facts—in this case of the Christmas tree’s true, pagan roots—cannot shake them.

Now that you know the truth of the origin of the Christmas tree, including what the Bible says about the forbidden custom, does it change your view? Cherished family traditions and the expectations of our society must not stand in the way of God’s clear instructions!

A loving God allows people to make their own decisions. We are free to obey or disobey. Yet understand that both decisions come with significant consequences.

If you are interested in learning more, we recommend you read our booklet The True Origin of Christmas.

The True Origin of Christmas