This website requires the use of Javascript to function correctly. Performance and usage will suffer if it remains disabled.
How to Enable Javascript
Should Christians Celebrate New Year’s? 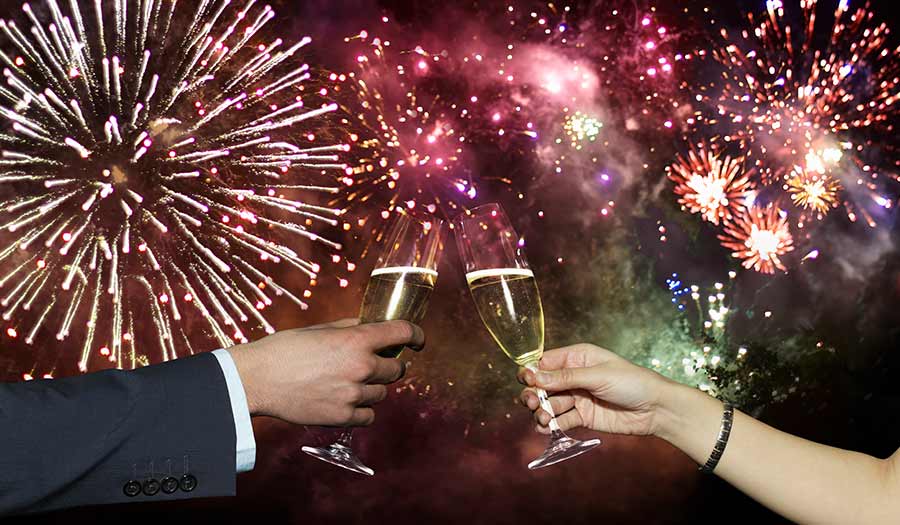 Millions keep New Year’s without knowing why—or where it originated. While some question its observance, most see nothing wrong with such a celebration.

Have you ever considered or investigated why you believe and practice what you do? The world is filled with endless customs and traditions. Yet few seek to understand and research the origin of things. Most go along with popular practices without question, choosing to do what everyone else does because it is easier. The majority hold the same beliefs they learned in childhood, assuming what they believe is right.

Should true Christians—whose calling and goal is to imitate the perfect life of Jesus Christ—celebrate New Year’s? Should they be caught up in the excitement? What could be wrong with “ringing out the old and ringing in the new”? What is the origin of this holiday? What does God say about it? You will be surprised to learn the truth that ministers of professing Christianity either do not know—or will not teach.

The Record of History

Before looking at what the Bible says about New Year’s, we must first examine the history of this popular holiday. Notice this from Encyclopaedia Britannica: “The earliest-known record of a New Year festival dates from about 2000 BC in Mesopotamia, where in Babylonia the New Year (Akitu) began with the new moon after the spring equinox (mid March) and in Assyria with the new moon nearest the autumn equinox (mid September).”

The World Book states: “Many ancient peoples…performed rituals to do away with the past and purify themselves for the new year. For example, some people put out the fires they were using and started new ones.” The Celts celebrated the new year on November 1, marking the end of summer and the harvest, and the beginning of the cold, dark winter ahead. (This was a precursor to Halloween.) They built sacred bonfires to scare off evil spirits and to honor their sun god.

Also notice this: “In early times, the ancient Romans gave each other New Year’s gifts of branches from sacred trees. In later years, they gave gold-covered nuts or coins imprinted with pictures of Janus, the god of gates, doors, and beginnings. January was named after Janus, who had two faces—one looking forward and the other looking backward” (ibid.).

These historical accounts make clear that the history of New Year’s Eve and New Year’s Day is deeply rooted in pagan traditions. It originated in the minds of men—pagan idol-worshippers—and it slowly developed over the centuries.

Now notice what God thinks about New Year’s, and any holiday that has its roots in pagan practices, customs and traditions. You will be shocked.

We begin with Jeremiah 10:2-3: “Learn not the way of the heathen…for the customs of the people are vain.” This is a plain command from God—in your Bible.

Throughout His Word, God de­scribes “the heathen” as those who worship nature (the sun, moon, stars, trees, etc.), or manmade idols, or anything but the one true God. God calls such people and their practices heathen. Men call them pagan. Christians know that God hates all customs, practices and traditions that have pagan roots.

How serious is God about paganism? Follow the next passages carefully. When He rescued the 12 tribes of Israel from Egypt and led them out of brutal slavery, He commanded, “After the doings of the land of Egypt, wherein you dwelt, you shall not do: and after the doings of the land of Canaan, where I bring you, shall you not do: neither shall you walk in…[men’s] ordinances” (Lev. 18:3). In verses 24-29, God told the Israelites not to defile themselves with the practices and customs of the surrounding nations. And also, “Therefore shall you keep My ordinance, that you commit not any one of these abominable customs, which were committed before you, and that you defile not yourselves therein: I am the Lord your God” (vs. 30).

God cursed Egypt with 10 plagues and freed Israel from slavery. He parted the Red Sea and led Israel to safety. He fed them manna from heaven, protected them from battle-tested gentile armies, delivered them into the Promised Land, and drove out their enemies. How did Israel treat God in turn? “Our fathers understood not Your wonders in Egypt; they remembered not the multitude of Your mercies; but provoked Him…at the Red Sea…They soon forgot His works; they waited not for His counsel: but lusted exceedingly in the wilderness, and tempted God in the desert…They made a calf in Horeb, and worshiped the molten image. Thus they changed their glory [the true God] into the similitude of an ox that eats grass. They forgot God their Savior, which had done great things in Egypt; wondrous works in the land of Ham, and terrible things by the Red Sea…they despised the pleasant land, they believed not His word: but murmured in their tents, and hearkened not unto the voice of the Lord … They joined themselves also unto Baal-peor, and ate the sacrifices of the dead. Thus they provoked Him to anger with their inventions” (Psa. 106:7-29).

After examining the previous scriptures, it becomes obvious that God does not take pagan practices lightly. True Christians know that “God is not the author of confusion, but of peace” (I Cor. 14:33).

The Greek word for “confusion” also means instability, disorder, commotion, tumult—words that aptly describe New Year’s chaotic history. For thousands of years, men kept changing their new year from spring to fall, from March 1 to January 1 (and in some cases December 25), to March 25, back to January 1 again—the dead of winter!

Even today, men cannot agree on the date. Notice: “Chinese New Year is celebrated officially for a month beginning in late January or early February,” and, “The Muslim New Year falls on the first day of the month of Muharram and commemorates the date of the Hegira (July 16, [AD] 622, on the Gregorian calendar), the starting point of the Muslim calendar. Since the Muslim year is a lunar one consisting of only 354 days, the commencement of the new year fluctuates widely by the Western calendar.” The Vietnamese New Year, Tet, falls sometime between January 21 and February 20. And, “the Jewish New Year…is observed during September or early October. Hindus in different parts of India celebrate the new year on various dates.”

This is what happens when people insist on following their own judgment rather than trusting the One who designed the entire universe and everything in it.

Not only is the history of New Year’s confusing and chaotic, but so is the holiday itself. During New Year’s celebrations, people let go of all inhibition—and many times self-respect—and go wild. They use drugs, overdrink, practice free sex—and with those they barely know. These actions often yield lifelong repercussions. Some even shoot guns to “ring in the new year.” Common sense is thrown away to have a good time. Usually, the only thing people regret are next-day hangovers.

Obviously, a holiday this chaotic, violent and dangerous does not reflect God’s command to “let all things be done decently and in order” (I Cor. 14:40). Again, true Christians recognize this about New Year’s celebrations—and avoid them.

But most people—including most thought-to-be Christians—love and follow the ideas of men. Jesus knew this and warned, “This people honors Me with their lips, but their heart is far from Me. Howbeit in vain do they worship Me, teaching for doctrines the commandments of men. For laying aside the commandment of God, you hold the tradition of men…Full well you reject [meaning you know exactly what you are doing] the commandment of God, that you may keep your own tradition…making the word of God of none effect through your tradition” (Mark 7:6-13).

God commands His people not to follow pagan practices!

When God instituted the Passover to Israel, He also revealed to them His sacred calendar. He said, “This month shall be unto you the beginning of months: it shall be the first month of the year to you” (Ex. 12:2).

God’s calendar begins in the spring, between March and April of this world’s calendar system. Leviticus 23 reveals all the special Holy Days (annual Sabbaths) that Christians are to observe. They are dictated by God’s calendar, not man’s. Although the Bible tells us when His calendar year begins, God does not command—or suggest—or even allow—that His followers ever throw aside self-control for a night of wild partying.

His people understand the days they are commanded to observe: Passover and the seven Days of Unleavened Bread (in the early spring)—the Feast of Pentecost (or Firstfruits, in the late spring)—the Feast of Trumpets (or Rosh Hashanah)—as well as the Day of Atonement (or Yom Kippur), the Feast of Tabernacles (Sukkot), and the Last Great Day, all in the early fall. God carefully explains when these days are to be observed within His sacred calendar. Jesus kept them, as did the apostles and the New Testament Church. The true Church—the only one Jesus established—has kept them for 2,000 years, since AD 31.

Jesus told His disciples, “You are not of the world, but I have chosen you out of the world” (John 15:19). Though they must live in it, Jesus’ disciples today are not—and cannot be—of this world!

Those truly serving God have their minds focused on God’s Kingdom (read Matthew 6:33). They strive to “put off the old man” and actively imitate the perfect, righteous example of Christ. They are to dedicate themselves to God and His way of life. They allow God’s Word to direct and guide every thought and action. They understand that they come out of the world—I repeat, including its pagan customs, practices and traditions. New Year’s is no exception.

Soon, Satan will be removed from his throne and replaced by Jesus Christ, who will establish God’s government—the way of righteousness, peace, mercy and truth—on Earth. When that day arrives, mankind will no longer be deceived into practicing customs contrary to God’s will.

You have heard the truth about New Year’s, its pagan origins, its history, and how God views its customs, traditions and practices. Now, what will you do this New Year?

To learn more about what God says regarding His Holy Days and men’s holidays, read my booklet God’s Holy Days or Pagan Holidays? 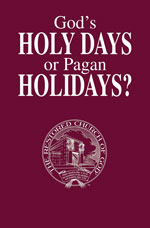