This website requires the use of Javascript to function correctly. Performance and usage will suffer if it remains disabled.
How to Enable Javascript
Comet Streaking Past Earth Provides Spectacular Show 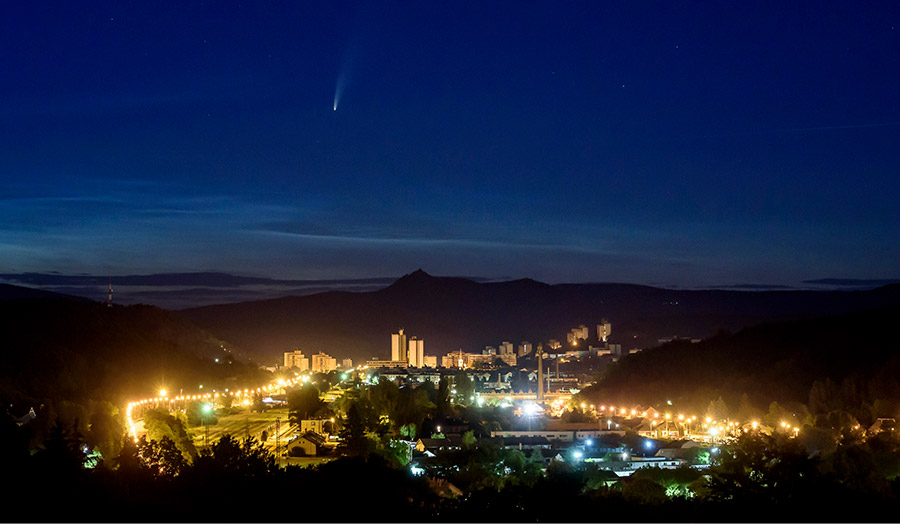 Peter Komka/MTI via AP
The Comet NEOWISE is seen above Salgotarjan, Hungary (July 10, 2020).

A newly discovered comet is streaking past Earth, providing a stunning nighttime show after buzzing the sun and expanding its tail.

Comet Neowise—the brightest comet visible from the Northern Hemisphere in a quarter-century—swept within Mercury’s orbit a week ago. Its close proximity to the sun caused dust and gas to burn off its surface and create an even bigger debris tail. Now the comet is headed our way, with closest approach in two weeks.

Scientists involved in the mission said the comet is about 3 miles across. Its nucleus is covered with sooty material dating back to the origin of our solar system 4.6 billion years ago.

The comet will be visible across the Northern Hemisphere until mid-August, when it heads back toward the outer solar system. While it is visible with the naked eye in dark skies with little or no light pollution, binoculars are needed to see the long tail, according to NASA.

“The light from the comet is sunlight reflecting off the dazzling tail of gas and dust trailing away from NEOWISE as it drifts ever farther from the sun,” Space.com reported. “A second tail made of ionized particles blown back from the comet’s head (called its ‘coma’) by the solar wind can be seen in some photos.”

It will be about 7,000 years before the comet returns, “so I wouldn’t suggest waiting for the next pass,” said the telescope’s deputy principal investigator Joe Masiero of NASA’s Jet Propulsion Laboratory in Pasadena, California.

He said it is the brightest comet since the mid-1990s for stargazers in the Northern Hemisphere.

“Things are really tough right now for lots of people,” Dr. Amy Mainzer, principal investigator of NASA’s Near-Earth Object Wide-field Infrared Survey Explorer (NEOWISE) mission, stated. “But this is a chance to look up and reconnect with the big picture stuff.”

Gazing at a star-filled sky on a clear night, away from city lights, always helps put our existence into perspective—especially during unique events such as an eclipse or the comet Neowise. This is nothing new.

President Theodore Roosevelt used the night sky as a meditative tool. Often he took walks on the grounds of his estate under a starry night sky with longtime friend American naturalist William Beebe. In his The Book of Naturalists, Beebe recounted that Roosevelt and he would often search the night sky for the faint spot of light known as the Andromeda Galaxy. When it was found, one of them would recite, “That is the Spiral Galaxy in Andromeda. It is as large as our Milky Way. It is one of one hundred million Galaxies. It is 750,000 light-years away. It consists of one hundred billion suns, each larger than our sun.”

After a moment of silence, Roosevelt would grin and say, “Now I think we are small enough! Let’s go to bed.”

Consider how true this is today—a time in which astronomers estimate there are hundreds of billions of galaxies total!

In the Old Testament, Israel’s King David captured this feeling in the book of Psalms: “When I consider Your heavens, the work of Your fingers, the moon and the stars, which You have ordained; what is man, that You are mindful of him?” (8:3-4).

This question’s answer is the single most exciting theme found within the Bible. It reveals a deeper, hopeful purpose for mankind.

The New Testament book of Hebrews quotes David and then begins to answer his question: “What is man, that You are mindful of him?…You [God] crowned him with glory and honor, and did set him over the works of Your hands: You have put all things in subjection under his feet. For in that He put all in subjection under him, He left nothing that is not put under him. But now we see not yet all things put under him” (2:6-8).

At first these verses may seem to contradict each other. God put “all things in subjection under” man, but “we see not yet all things put under him.” Put another way, in the future, all things will be put under the rulership of man, but this has not yet happened.

The Moffatt translation of the Bible renders the Greek word for “all things” as “the universe.” Man is to rule the entire universe!

Yet to do so, he must first learn the way of give, which can be done by building the character of God, as seen within the Bible and throughout Creation. Human nature must be overcome, and genuine outflowing concern must take its place.

Although man has moments of incredible ingenuity, human nature is holding him back. Imagine how much more he could achieve if vanity, jealousy, lust and greed came to an end!

For many more details about mankind’s incredible future and the grand purpose for human existence, read the enlightening and inspiring free book The Awesome Potential of Man.

Despite the bleak picture seen in headlines today, man is not doomed to fail—he is destined to succeed! 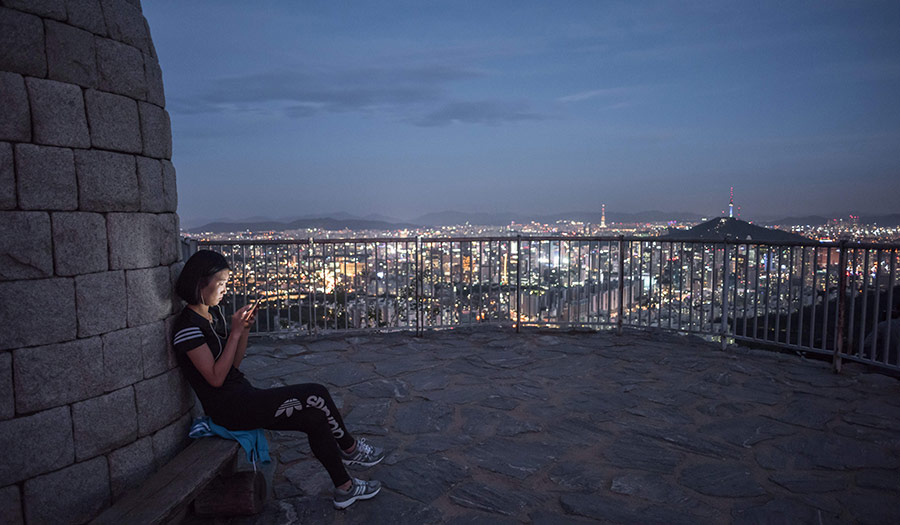 Lost Under City Lights
Masked by man-made light, the vast treasure trove beyond our skies is slipping out of view. But why should you be concerned?