This website requires the use of Javascript to function correctly. Performance and usage will suffer if it remains disabled.
How to Enable Javascript
World News Report: August 2016 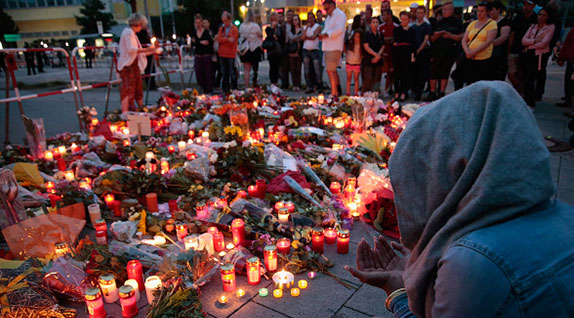 Mankind has truly arrived at the age of terror. In this modern time, where globalization has practically turned the world into a global village, news of every terrorist attack is known everywhere almost immediately. Each new bombing, shooting, beheading or stabbing hits deep into the world’s psyche, striking fear in everyone, thinking, “This could happen in my hometown.” It seems people cannot even finish mourning the loss of their family, friends or neighbors before another attack occurs.

The latest report shows Europe now experiences a terrorist strike much more often than anyone realizes. The following CNN article summarized the horrific trend. The journalist wrote: “[In one week] I have seen flowers and candles carpeting a street in Munich, the tranquility of a small Bavarian town shattered by a suicide bomb and a small church in suburban France sealed off after its octogenarian priest had his throat cut.

“Before these horrific events, there was a knife-wielding teenager on a German train. And before that, much deadlier attacks in Nice, Brussels and last November, in Paris.

“This year has seen an accelerating pattern of attacks linked to ISIS in Europe and beyond—from Turkey to Bangladesh, the United States to Indonesia. According to the group IntelCenter, which tracks acts of terrorism, there has been a significant attack directed or inspired by ISIS every 84 hours since June 8 in cities outside the war zones in Iraq, Syria, Sinai in Egypt and Libya. CNN’s own tracking of attacks supports that conclusion.”

The importance of seeking God’s kingdom—and all the solutions that are to arrive with it—becomes ever more necessary as each new attack occurs.

More experts are urgently warning of the spread of ISIS. According to Bloomberg (italics mine): “Hundreds of terrorists will fan out to infiltrate western Europe and the U.S. to carry out attacks on a wider scale as Islamic State is defeated in Syria, FBI Director James Comey warned.”

“‘At some point there’s going to be a terrorist diaspora out of Syria like we’ve never seen before,’ Comey said…‘We saw the future of this threat in Brussels and Paris,’ said the head of the Federal Bureau of Investigation, adding that future attacks will be on ‘an order of magnitude greater.’” Later in the article, Mr. Comey called “violence directed or inspired by Islamic State ‘the greatest threat to the physical safety of Americans today,’ [and] said that ‘a lot of terrorists fled out of Afghanistan in the late 1980s and early 1990s. This is 10 times that or more.’”

Germany (modern Assyria) is in an uproar after multiple terrorists struck targets across the country in July. Look at this: “Germany is on edge. ‘Wilkommenskultur’—the buzzword that welcomed more than a million refugees into the country last year—has given way to an unsettling fear that the country is not prepared for the security and integration challenges of taking in a diverse, often traumatized population that comes with their own emotional baggage” (CNN).

The article continues: “‘Angst’ [German for fear]…is now commonly heard during conversations in local beer gardens. Far right groups have tried to capitalize on that public fear, ramping up their anti-immigration rhetoric.” For many reasons, over a period of the last 50 years, I have been able to gain an intimate knowledge of the German people, who are among the most capable peoples of the Earth. While they are wonderful in many ways, when under attack or threat of attack, they morph into something fierce and focused. They are practically an unbeatable foe in any war where they are not outnumbered several times over. Now that Germany is being targeted, a record number of people are requesting permits for self-defense weapons.

A recent article in The Telegraph summarized the first seven months of this year so far with this bleak picture: “Will 2016 go down as one of the worst years in history? A glance at the news might make you think so. Last week’s grotesque murder of the 85-year-old Normandy priest, Father Jacques Hamel, came hard on the heels of the Nice massacre a fortnight ago. In France alone, nearly 250 people have been killed by terrorists over the last year and a half—more than the total number of French civilians killed by terrorists over the entire 20th century.

“The fear after the terror is great, too. In Cannes, that byword for free and easy French Riviera living, authorities last week banned any beach bags big enough to conceal a weapon.

“And that’s just France. Add in Germany—which has seen an axe attack, a teenager on a mad shooting spree, a vicious knifing and a suicide bombing, which left 13 dead, including three attackers, and dozens wounded.

“Then there’s Turkey, where the failed coup…left more than 300 people dead and more than 2,100 injured. And that was less than three weeks after three suicide bombers hit Istanbul Ataturk Airport, killing 41 and injuring more than 230.

“The list goes on: police killing civilians in America, civilians killing police; the mass bloodbaths of Syria and Iraq; the Zika virus devastating Brazil, just before the Rio Olympics.”

Devastating fires, floods and droughts here as well, plus the worst economic recovery in the United States since 1949, on top of the most bizarre and corrupt presidential campaigns in American history, also add to the picture.

But more and more people are wondering when the violence will end. We are in the days Jesus Christ said would be like Noah’s time—when “the earth was filled with violence,” and “all flesh had corrupted his way” (Gen. 6:11-13). Think. Police officer deaths in America were up 78 percent in 2016 over 2015. Just in July, at least three cities were affected by this heartless violence—Dallas, San Diego, and Baton Rouge. And the question is not if it will happen again but where it will break out. People are turning to their politicians to break the vicious cycle. But politicians are utterly helpless to prevent these attacks. Human nature has become a runaway train, one that only God can ultimately stop when He soon intervenes in world affairs. Barriers are dropping everywhere, and conduct, long in the sewer, is approaching the BOTTOM of the sewer.

To learn more about how the violence will cease, read our free booklet How World Peace Will Come!