This website requires the use of Javascript to function correctly. Performance and usage will suffer if it remains disabled.
How to Enable Javascript
World News Report: June 2016 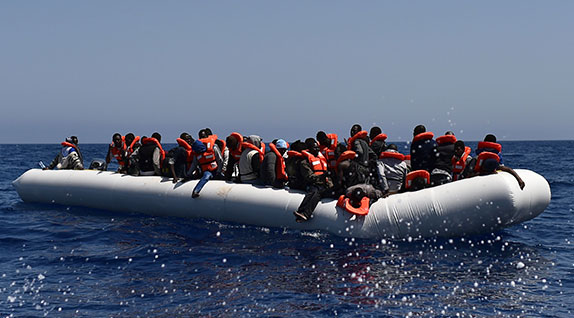 Saved: Migrants and refugees await help during a rescue operation in the Mediterranean Sea near the Libyan coast (May 24, 2016).

Violence (all kinds) seems to be exploding in every corner of the world. An unprecedented crime wave is striking the United States, but seems to be mostly happening under the radar—here a little, there a little. The increase in violence is due in part to a slowdown in proactive policing, called the “Ferguson effect.” Officers are much more hesitant to engage people with millions of cellphone cameras ready to post online the skewed accounts of “police brutality.”

Notice this from a Wall Street Journal article titled “The Nationwide Crime Wave Is Building”: “In Chicago, where pedestrian stops have fallen nearly 90%, homicides this year are up 60% compared with the same period last year. Compared with the first four and half months of 2014, homicides in Chicago are up 95%, according to the police department.”

A Chicago police officer who works in the “tough South Side” told the writer: “In my 19 years in law enforcement, I haven’t seen this kind of hatred towards the police…People want to fight you…‘We don’t have to listen,’ they say.”

Another police officer in Los Angeles shared his experience: “Several years ago I could use a reasonable and justified amount of force and not be cursed and jeered at. Now our officers are getting surrounded every time they put handcuffs on someone.”

“Resistance to arrest is up, cops across the country say, and officers are getting injured,” the article stated.

The paper continues by addressing one of the great causes, which is that “until the urban family is reconstituted, law-abiding residents of high-crime neighborhoods will need the police to maintain public order in the midst of profound social breakdown.

“Last week in Chicago, a man on the South Side who works in a bakery told me that he now sees ‘a lot of people disrespect the police, cussing and fussing.’ He added: ‘There’s so much killing going on now in Chicago, it’s ridiculous. The problem is not the cops, it’s the people, especially this younger crowd with the guns.’”

The piece ended: “But unless the ignorant caricaturing of cops ends, there will be good reason for FBI Director Comey and the rest of us to worry about what the rising tide of bloodshed holds in store for U.S. cities this summer.”

Another shocking article explained that warmer weather inevitably leads to more violence simply because youth are spending more time outdoors: “…the holiday [Memorial Day] weekend is often seen here as the start of heightened violence…That has been particularly worrying this year to community leaders and city officials, as they grapple with a rise in gun violence that has traumatized some neighborhoods and left city officials searching for new ways to subdue street crime.”

The article continued: “As of Friday morning, homicides in Chicago were up 52 percent in 2016, compared with the same period a year ago, and shootings had increased by 50 percent…Only five months into the year, at least 233 people had been killed.”

The 59th chapter of Isaiah is being fulfilled in these headlines. Here is what God recorded thousands of years ago when speaking of the modern descendants of Israel and Judah: “Your hands are defiled with blood, and your fingers with iniquity…None calls for justice, nor any pleads for truth: they trust in vanity, and speak lies; they conceive mischief, and bring forth iniquity.”

“…their works are works of iniquity, and the act of violence is in their hands. Their feet run to evil, and they make haste to shed innocent blood: their thoughts are thoughts of iniquity; wasting and destruction are in their paths. The way of peace they know not; and there is no judgment in their goings…”

“Judgment is turned away backward, and justice stands afar off [think of the new hesitancy among the nation’s police force described above, but also of the criminal justice system that no longer backs up the need to protect society from violent criminals. The problem?]: for truth is fallen in the street, and equity cannot enter. Yes, truth fails; and he that departs from evil makes himself a prey: and the Lord saw it, and it displeased Him that there was no judgment” (vs. 3-4, 6-8, 14-15).

This prophecy spans the period immediately prior to Christ’s arrival to establish His government.

Meanwhile, Europe continues to struggle with a worsening migrant crisis. So far this year, 1,370 migrants have drowned attempting to reach Europe’s shores. Experts say masses of desperate Africans from many countries in distress will risk their lives this summer to pay smugglers in Libya large sums to board leaky, overloaded boats in order to escape to Italy and Europe.

Notice just one day: “About 4,000 migrants were rescued from the sea on Thursday [May 26] as the Italian Coast Guard coordinated and concluded nearly two dozen operations…In total, more than 10,000 migrants have been rescued [since last] week by various international agencies.

“Warm weather and calm seas prompted many hundreds of migrants to attempt the perilous sea crossing from North Africa to Italy this week, the Italian Coast Guard said.

“In addition, officials said the near closing of the route from Turkey to Greece after a deal between Ankara and the European Union earlier this year may be putting still more pressure on the route to Italy.”

“…seven people…died on Wednesday [May 25] when their crowded ship overturned as rescuers watched” (The New York Times).

All of these people are like every other human being, including you and me. They are seeking a future with safety, opportunity and happiness. They will not find it in Europe or anywhere else because this world cannot offer it.

Looking at the Middle East, a new book titled The Morning They Came for Us details the utter depravity of life in war-torn Syria, with now the more accurate number killed at 400,000, with millions more having fled to neighboring countries. A New York Times book review makes the war statistics personal: “The title of Janine di Giovanni’s devastating new book, ‘The Morning They Came for Us,’ refers to those terrible moments in ordinary Syrians’ lives when the war in their country becomes personal. Those moments when there is a knock on the door and the police or intelligence services take a family member away. Those moments when a government-delivered barrel bomb falls on your home, your school, your hospital, and daily life is forever ruptured.

“‘The water stops, taps run dry, banks go, and a sniper kills your brother,’ she writes. Garbage is everywhere because there are no longer any functioning city services, and entire neighborhoods are turned into fields of rubble. Victorian diseases like polio, typhoid and cholera resurface. Children wear rubber sandals in the winter cold because they do not have shoes. People are forced to do without ‘toothpaste, money, vitamins, birth-control pills, X-rays, chemotherapy, insulin, painkillers.’

“In the five years since the Assad regime cracked down on peaceful antigovernment protests and the conflict escalated into full-blown civil war, more than 250,000 Syrians have been killed and some 12 million people—more than half the country’s prewar population—have been displaced, including five million who have fled to neighboring countries and to Europe in what the United Nations calls the largest refugee crisis since World War II.”

The reviewer went on to explain how the author “gives us a visceral understanding of what it is like to live in wartime Syria, recounting some of the individual stories behind the numbing statistics: students who were whisked away by the police and interrogated and tortured; children who died from common infections because medicine and doctors were unavailable; women who were raped by soldiers at checkpoints and in jail; families who fled besieged cities like Homs, only to return because there was no place else to go.”

Considering these utterly appalling conditions, it is not a surprise that the following article in The Independent appeared regarding a horrific disease surging through this region of the world: “A disfiguring tropical disease is sweeping across the Middle East as a combination of heavy conflict and a breakdown of health care facilities in Isis-occupied areas leaves swathes of people vulnerable to the illness.

“Cutaneous leishmaniasis is transmitted exclusively through bites from sand flies and can result in horrible open sores as well as disfiguring skin lesions, nodules or papules if left untreated.

“Leishmaniasis has been endemic in Syria for centuries and was once commonly known as the ‘Aleppo evil.’…However, as Syria’s civil war continues the resulting refugee crisis has triggered a catastrophic outbreak of the disease…”

The article continued: “…the disease is now affecting hundreds of thousands of people living in refugee camps or trapped in conflict zones. A similar situation may also be unfolding in eastern Libya and Yemen.”

Deadly new forms of disease from other parts of the world are also appearing in America. For the first time, a superbug totally immune to all antibiotics has been discovered. Read the following quote carefully and consider the sobering implications of a new bacteria called simply MCR-1: “A 49-year-old Pennsylvania woman showed the presence of a rare kind of E. coli infection, the first known case of its kind in the United States. It is a superbug that is resistant to many antibiotics, even Colistin, which doctors use as a last resort when other antibiotics fail” (CNN).

The news organization later stated: “The concern is that traits of this rare mutant Colistin-resistent E. coli could jump to other bacteria that respond only to Colistin, creating a potentially unstoppable superbug.

“One report suggests that antibiotic-resistant infections can result in the deaths of half the patients who become infected.

“Antibiotic resistance has become a growing problem in this country. The World Health Organization has warned that it is one of the biggest threats to global health today.”

The outlet further stated (emphasis in bold added): “Each year in the United States, at least 2 million people become infected with other kinds of bacteria that can’t be beaten with most antibiotics, and at least 23,000 people die each year as a result of those infections, according to the CDC.”

“The medicine cabinet is empty for some patients,” Centers for Disease Control and Prevention Director Dr. Thomas Frieden stated in the article. “It is the end of the road unless we act urgently.”

It is terrible reports like these that cause growing numbers to stop following news altogether. Depression quickly can take root for those in this world unaware of the hope of God’s coming kingdom. To learn how these problems will be resolved, read our free booklet How World Peace Will Come!