This website requires the use of Javascript to function correctly. Performance and usage will suffer if it remains disabled.
How to Enable Javascript
World News Report: February 2016 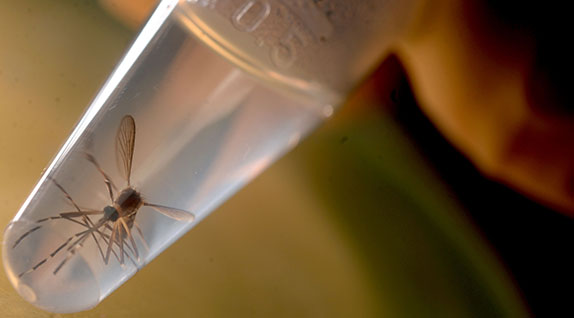 Marvin Recinos/AFP/Getty Images
Insect-borne disease: A specimen of the yellow fever mosquito, which is a carrier of the Zika virus, is contained in a laboratory at the University of El Salvador in San Salvador (Feb. 3, 2016).

The summary of world news remains ever the same: bad, growing worse, and speeding up besides. The Zika virus is the latest disease to capture news headlines, with no vaccine ready for use until the end of 2016. The New York Times reported this about its explosive spread: “The World Health Organization rang a global alarm over the Zika virus…saying that the disease was ‘spreading explosively’ in the Americas and that as many as four million people could be infected by the end of the year. The global health agency will convene a special meeting…to decide whether to declare a public health emergency. It is moving swiftly to combat this outbreak after widespread criticism that it had allowed the last major global health crisis, Ebola, to fester without a coordinated, effective strategy. Since last spring, more than 20 countries have reported locally acquired cases of Zika, which is transmitted by mosquitoes and may cause birth defects.

“‘The level of alarm is extremely high,’ said Dr. Margaret Chan, the director general of the W.H.O., in a speech in Geneva.” The total of 20 countries listed here quickly became now 28, or even more.

Such diseases were never intended by God. But in a world cut off from Him (Isa. 59:1-2), they are part of everyday life for millions of people who are blindsided by disaster that no one could see coming. Make this personal. Imagine a baby with an abnormally small head (microcephaly—one of the birth defects) born to your family or to friends to appreciate what growing numbers are experiencing in so many places. Man is helpless in the face of mere mosquitoes—who carry the virus! He cannot solve many small problems never mind big ones!

In fact, reports are now emerging that scientists may have caused the exploding problem while attempting to solve another! Notice this stunning admission:

“The Zika virus outbreak currently gripping the Americas could have been sparked by the release of genetically modified mosquitoes in 2012, critics say. The insects were engineered by biotechnology experts to combat the spread of dengue fever and other diseases and released into the general population of Brazil in 2012. But with the World Health Organisation (WHO) now meeting in Geneva to desperately discuss cures for the Zika virus, speculation has mounted as to the cause of this sudden outbreak” (The Daily Mirror).

Such are the “solutions” of human beings.

As I’ve found myself quoting through the years, British Prime Minister Sir Winston Churchill said, “Democracy is the worst form of government, except for all those other forms that have been tried from time to time.” That was 1947, 69 years ago. What would he think of the campaign for U.S. president today?

True Christians do not take political sides—ever! Those called out of this world (Rev. 18:4; John 17:15-17) do not support or oppose any candidate. Installation of government officials is solely up to God. But all-important character is lacking across the board! Getting the nomination—Republican or Democrat—has devolved into an every-four-years vicious catfight. The tactics, ploys, slanderous name-calling, outright lies and nonstop equivocations are noticeably worse than any I have witnessed in election cycles since the 1970s. Those of you in the United States who go back to—or before—this time would almost certainly agree.

Viewers of the recent World to Come series realize that God plans to fix all issues—from Mt. Zion in Jerusalem. So He has a major emphasis on conditions in the modern nation of Israel—the reason this Work so focuses on that tiny nation and will continue to do so until great prophecies are fulfilled. Israel’s well-being turns largely on its relationship with the West.

More importantly, the “special relationship” between the U.S. and Israel continues to rapidly erode. Breitbart reported the following:

“In a step towards joining an Israel boycott, the U.S. is now requiring goods originating from the West Bank (also known as Judea and Samaria) to be labeled separately from products from the rest of Israel, following the European Union’s crackdown on products from the disputed territories.”

The article adds, “In its statement, U.S. Customs threatens, ‘goods that are erroneously marked as products of Israel will be subject to an enforcement action carried out by U.S. Customs and Border Protection.’” This can only be interpreted to mean the U.S. government does not believe Israel is the rightful possessor of the West Bank. Events will not turn in Israel’s favor until it acknowledges and repents of huge national sins. Prophecy reveals in detail that it is God who is bringing punishment through surrounding nations.

Finally is this bombshell revelation reported by The Times of Israel: “US and British intelligence services have spied on the Israeli air force for at least 18 years, after cracking the IDF’s special encryption system for communication between fighter jets, drones and army bases, Israel’s military censor approved for publication Friday, after reports of the spying operation appeared in two overseas publications…‘This is an earthquake,’ a senior security source—who spoke on condition of anonymity—told Ynet. ‘It means that they have forcibly stripped us, and, no less important, that probably none of our encrypted systems are safe from them. This is the worst leak in the history of Israeli intelligence.’”

How long until this relationship turns from bad to worse to completely over? Only one magazine, led by one organization (The Restored Church of God), is explaining to the world the why and what of all that is occurring. Keep reading The Real Truth!