This website requires the use of Javascript to function correctly. Performance and usage will suffer if it remains disabled.
How to Enable Javascript
World News Report: September 2015 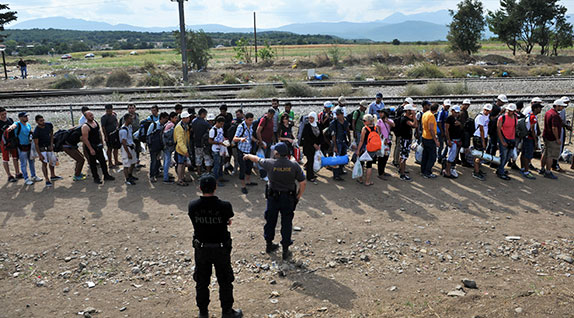 The plight of mankind has reached a new low. One of the greatest problems facing many nations (and more all the time) at the end of the age is the issue of illegal immigration. The European Union (EU) is now struggling mightily to come to grips and deal with a spiraling crisis, moving toward a conclusion beyond what anyone can yet begin to see (italics mine). The sheer human “pathos” of what is happening to people whose world has been destroyed is staggering:

“European Union ministers were summoned…to meet in two weeks’ time to seek urgent solutions to a migration crisis unprecedented in the bloc’s history, as the mounting death toll on land and sea forced governments to respond. Luxembourg, which holds the rotating EU presidency, called interior ministers from all 28 member states to an extraordinary meeting on Sept. 14, saying: ‘The situation of migration phenomena outside and inside the European Union has recently taken unprecedented proportions.’ [German] Chancellor Angela Merkel earlier called on her EU neighbours to do more as Germany expects the number of asylum seekers it receives to quadruple to about 800,000 in 2015” (Reuters).

Prophecy shows that war will only make this crisis much, much worse than today’s conditions—what will probably eventually be seen as “the good old days” compared to what is coming.

The British newspaper The Guardian detailed more about the number of migrants flooding into the EU:

“Unprecedented numbers of migrants are reaching EU borders, surpassing 100,000 in July alone and reaching more than 340,000 this year so far. Italy and Greece are struggling to cope, while Macedonia has declared a state of emergency. The Italian prime minister, Matteo Renzi, said…he believed the crisis would push the EU to adopt uniform rules for refugees in place of the current patchwork of laws and approaches. ‘It will take months, but we will have a single European policy on asylum, not as many policies as there are countries,’ he told the Corriere della Sera. The French, British and German statement specifically called for reception centres to be set up urgently in Italy and Greece to register new arrivals, and for a common EU list of ‘safe countries of origin’ to be established, which would theoretically allow asylum applications to be fast-tracked for specific nationalities.”

Next is what has become a vicious battle in the U.S. Congress over the controversial Iran nuclear agreement. The following excerpt from an article titled “Congressional Fight on Iran Deal Is All But Over” shows that President Obama has now almost certainly successfully blocked legislative opposition to the deal:

“Opponents of the Iran nuclear deal in Congress admit they can no longer kill the accord. Their focus now is making sure there will be a vote on the agreement at all, and salvaging some political benefit from their well-funded bid to stop it. Lawmakers, Congressional staffers and lobbyists opposed to the deal reached in Vienna last month tell us they are now fighting to get more than 60 votes in the Senate for a resolution of disapproval to avoid a filibuster by Democrats supporting President Barack Obama. That is a far cry from the 67 votes in the Senate needed, along with two thirds of the House, to overturn an expected presidential veto of that resolution. Yes, overturning an Obama veto was always a longshot. House Speaker John Boehner in April was privately warning Republicans that his party didn’t have the votes to stop the deal. Now Republican leaders are saying this out in the open. Bob Corker, chairman of the Senate Foreign Relations Committee, said Wednesday it was ‘very unlikely’ there would be 67 votes against the deal in the Senate, but there would be a ‘bipartisan majority’ voting to disapprove of the deal. As of now, only two Senate Democrats and 14 House Democrats have come out against the pact” (Bloomberg).

With the deal essentially going through, the tiny nation of Israel, led by Prime Minister Benjamin Netanyahu, now is confronted with the fateful choice of whether and when to attack Iran’s nuclear facilities. Experts report that Israel does have the capability to do this.

The world also saw global stock markets severely rattled in August and September after China’s market crashed. Reuters reported, “A near-9 percent dive in China shares sent world stocks and commodity prices tumbling on Monday [Aug. 24], and U.S. stocks ended a volatile day with the S&P 500 and Nasdaq composite indexes sliding into correction territory. After dropping more than 1,000 points, or almost 7 percent, at Wall Street’s open, the Dow Jones industrial average cut its losses but still finished down 3.6 percent. The Standard & Poor’s 500 index closed down 3.9 percent for the day and was 11 percent lower than its May record high.”

“The slump in Chinese stocks was their worst performance since the depths of the global financial crisis in 2007 and wiped out what was left of 2015’s gains, which in June stood at more than 50 percent...The Australian dollar fell to more than six-year lows and many emerging market currencies also plunged…”

Finally, Pope Francis is visiting America in late September. His itinerary includes: “The pope’s U.S. trip includes a meeting with President Obama at the White House, an address in front of a joint-meeting of Congress, an address at the U.N. General Assembly in New York and a ‘multi-religious service’ at the 9/11 Memorial and Museum. His trip will conclude in Philadelphia at the World Meeting of Families, a global event organized by the Catholic Church that focuses on strengthening family bonds. Event organizers expect up to two million people to attend the pope’s closing mass” (ABC News).

How interesting in light of Europe’s plight that the pope’s spokesman said Francis would enter the United States across the Mexican border to show solidarity with illegals pouring into this country from Mexico.

So few world leaders have real solutions to the big issues described above. And any at least partially good ideas that may be presented invariably get stuck in the political gridlock of man’s ineffective and failed governments. Thankfully, this will all soon change when Jesus Christ returns to establish His government over all nations. The masses will finally have the opportunity to be led and instructed by righteous leaders—members of the ruling Family of God in the Kingdom of God. This is part of the truly GOOD NEWS of Christ’s gospel, which is going out in REAL POWER to all peoples of the world!

To learn more about this subject, read our eye-opening booklet What Is the Kingdom of God?

What Is the Kingdom of God?