This website requires the use of Javascript to function correctly. Performance and usage will suffer if it remains disabled.
How to Enable Javascript
Tensions Mount Over EU Bailout of Greece 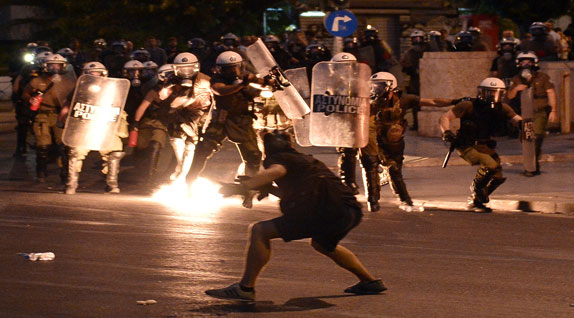 Riots: A protester hurls a petrol bomb toward riot police in central Athens, during an anti-austerity protest on July 15, 2015.

Thousands of Greeks took to the streets of Athens to protest Germany-led bailout terms with Europe. The riots—which have included citizens throwing Molotov cocktails and police responding with rubber bullets and tear gas—are the most evident outward signs of discontentment since the deal was signed on July 10.

While the bailout package gives bankruptcy-threatened Greece 86 billion euros ($93 billion), which is a significant cut to the nation’s 320 billion euro ($347 billion) debt, the strings attached have not sat well with Greek citizens. The deal requires Athens to hand over 50 billion euros ($54 billion) in public assets, as well as cut pensions, increase taxes, and slash government spending.

Citizens across the European Union have also voiced their disapproval, with much of it aimed against Berlin’s hardline stance in the bailout negations. Since the deal, anti-austerity protests have erupted in Germany, the United Kingdom, and Belgium, among other nations.

In addition, a leading advocate for European integration, Jurgen Habermas, accused German Chancellor Angela Merkel of administering an “act of punishment” and expressed that Germany “unashamedly revealed itself as Europe’s chief disciplinarian and for the first time openly made a claim for German hegemony in Europe” (Business Insider).

An opinion-editorial piece in The Guardian stated: “A eurozone nakedly dominated by one state, Germany, enforcing destructive austerity on its vassals with such brutality, can have no enduring legitimacy.”

The news outlet also suggested an inevitable Grexit (Greece’s exit from the eurozone and possibly the European Union) and questioned whether “Greece will be forced out of the euro, or leave of its own accord.”

Even the International Monetary Fund has concerns about the deal. BBC reported that the IMF “said Greece’s public debt was now ‘highly unsustainable’ and urged debt relief on a scale ‘well beyond what has been under consideration to date.’”

The idea of uniting the disparate peoples, languages and cultures of Europe has been fraught with difficulty since the power bloc’s infancy following World War II. Yet history shows the continent has overcome these obstacles many times before.

To learn what it takes to truly unite Europe, read The Real Truth article Five Traits Needed to Lead Europe.