This website requires the use of Javascript to function correctly. Performance and usage will suffer if it remains disabled.
How to Enable Javascript
Does God Speak Through “Blood Moons”?

Does God Speak Through “Blood Moons”? 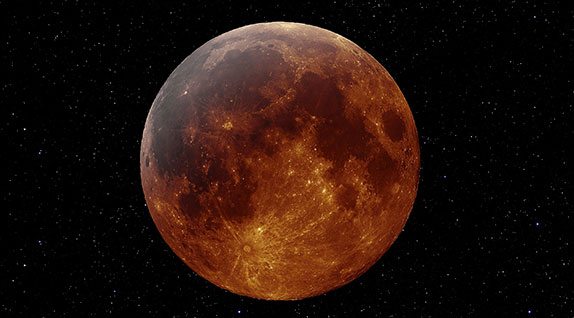 What is all the fuss about “blood moons”? You may have read about four total lunar eclipses throughout the next year and a half—and heard a prominent televangelist say they have biblical significance. You may have seen major news outlets, such as Los Angeles Times and CNN, pick up the story. You might be intrigued by the titillating theory that the sun and the moon are God’s way of communicating with mankind—for those who are looking.

You may feel like you are in the dark, but this need not be!

The idea started with Mark Biltz of El Shaddai Ministries and was popularized by non-denominational TV preacher John Hagee. It centers on a quartet of “blood moons” (known as a tetrad) to occur between spring 2014 and fall 2015, with a total solar eclipse falling in the middle on what they term the Jewish New Year.

Mr. Biltz feels that these events are unique because each lands on biblical Holy Days (except for the total solar eclipse), and should be seen as a warning sign that significant events will take place in the Middle East. Mr. Hagee agrees and calls the event “God’s billboard.” He believes that a world-shaking event is about to occur in the nation of Israel.

To back up this claim, the two preachers mention that important events in Jewish history have happened around Holy Day tetrads. They mark the expulsion of Jews from Spain in 1492, Israel becoming a nation in 1948, and the Six-Day War in 1967 as all relating to such cosmic occurrences.

Also, the two men quote Joel 2: “And I will show wonders in the heavens and in the earth…The sun shall be turned into darkness, and the moon into blood, before the great and the terrible day of the Lord come” (vs. 30-31).

The theory supposes that over the next year, the moon will turn “into blood” four times and the sun “into darkness” once. This means an earthshattering event is about to occur for Israel, right?

Upon closer scrutiny, however, this idea crumbles into a pile of rubble.

First, realize that when people use the term “blood moon,” they are really talking about a total lunar eclipse—a full moon being wholly enveloped in Earth’s shadow. While this does not happen every day, it is a normal astronomical event. NASA can predict when these will occur with pinpoint accuracy. In addition, while tetrads are somewhat rare, they are not unique.

The reddish color of such an eclipse comes from the sun’s rays being filtered through the edges of the Earth’s atmosphere toward the moon. This scatters the blue wavelengths of light, while the red and orange wavelengths punch through and are projected on the moon.

The first of the four lunar eclipses occurred on April 15, 2014, which was the first day of Unleavened Bread, a week-long festival referenced in the Scriptures. Another will occur during this same spring feast next year with the other two during the Feast of Tabernacles in the fall of 2014 and 2015. So why are these eclipses landing on biblical Holy Days?

Realize that God’s calendar is lunisolar, which means it takes into account both the sun and moon. This is in marked contrast with the modern Roman calendar that only relies on the sun.

Where the biblical Holy Days fall on the calendar is marked by the moon. Every year, the first days of the Feast of Unleavened Bread and the Feast of Tabernacles have full moons. This fact significantly increases the likelihood that lunar eclipses and tetrads will fall on these dates.

Also realize that this has been the case for thousands of years!

The Creator is a God of exactness. When He declares He will do something, it will come—and right on time. In the Old Testament book of Isaiah, He states, “I have declared the former things from the beginning; and they went forth out of My mouth, and I showed them; I did them suddenly, and they came to pass…I have even from the beginning declared it to you; before it came to pass I showed it you…” (48:3, 5).

If tetrads herald significant events for the Jewish people, then the historical events touted as proof would have occurred with precision and order. Herein lies a major problem for the blood moon theory. None of the historic events mentioned by Mr. Hagee or Mr. Biltz actually occurred on the dates of the tetrad eclipses. Notice:

In addition, there were two other Holy Day tetrads that occurred around minor events in Jewish history. And, stunningly, three more that were passed over by Mr. Biltz because he could not connect any important happenings to them.

Let’s tally this up: three tetrads had zero events tied to them, two occurred around minor events, two eclipse cycles landed after the events, and just one event occurred shortly after the first of four eclipses. In other words, there is no clear pattern at all!

Yet there is another point that puts the matter to rest…

The “blood moons” idea hinges on the assumption that it is a fulfillment of the heavenly signs mentioned in Joel 2. Yet is this accurate?

Read verse 31 again: “The sun shall be turned into darkness, and the moon into blood, before the great and the terrible day of the Lord come.”

These heavenly signs will occur just before what is called “the great and the terrible day of the Lord.” Elsewhere in the Bible it is made crystal clear that the Day of the Lord will take place after the Great Tribulation. Revelation equates this with what it calls the “sixth seal” (the Tribulation is the “fifth seal”).

Real Truth Editor-in-Chief David C. Pack explains this in Revelation Explained at Last! The entirety of the subhead “The Sixth Seal—HEAVENLY SIGNS” is reprinted here:

Next comes the sixth seal—the HEAVENLY, or astronomical, SIGNS: “And I beheld when He had opened the SIXTH SEAL, and, lo, there was a great earthquake; and the sun became black as sackcloth of hair, and the moon became as blood; And the stars of heaven fell unto the earth, even as a fig tree casts her untimely figs, when she is shaken of a mighty wind” (Rev. 6:12-13).

How do we know that the Heavenly Signs come directly on the heels of the Great Tribulation? Here are Christ’s words: “Immediately after the tribulation of those days shall the sun be darkened, and the moon shall not give her light, and the stars shall fall from heaven, and the powers of the heavens shall be shaken” (Matt. 24:29).

This is an almost verbatim, phrase-by-phrase description of Revelation 6:12-13. The parallel is unmistakable. Christ has again interpreted the sixth seal, and its timing, for us. The phrase “immediately after the tribulation” removes all doubt about when the Heavenly Signs occur.

The arrival of the Heavenly Signs heralds a great overall change in the direction—and speed—of events. This is understood by continuing in Revelation 6, a few verses later. Notice: “For the GREAT DAY OF HIS WRATH IS COME; and who shall be able to stand?” (vs. 17).

There it is in plain English. The Day of the Lord, or Day of God’s Wrath, follows the sixth seal. Heaven and earth are shaken! This time reveals God’s AWESOME POWER! It is comparable to nothing that has ever happened before, or will ever happen again.

The prophet Joel was speaking of this time when God’s awesome power and great Wrath will be displayed when he said, “The sun shall be turned into darkness, and the moon into blood, BEFORE the great and dreadful Day of the Lord come” (2:31).

Some have claimed that these signs have already occurred. This is impossible! Matthew 24 makes plain that they all follow—not precede—the Tribulation. In addition, when they occur, they are either immediately followed by or accompany the sign of Christ’s Coming (vs. 29-30).

The terrible period of God’s Wrath is foretold to last an ENTIRE YEAR—after the initial two and a half years of the Tribulation. Here is how Isaiah described it: “For it is the Day of the LORD’s vengeance, and the YEAR of recompenses for the controversy of Zion” (34:8). Jeremiah refers to this period as “the YEAR of…visitation” (11:23; 23:12—also see Ezek. 4:6 and Num. 14:34).

God’s timeline for future events is plain. The heavenly signs mentioned in Joel 2 occur after the Great Tribulation. There is no chance that the current tetrad is involved in anyway. Proponents of this prophecy may be sincere, but they are sincerely wrong!

Tellingly, Mr. Biltz has even given himself an “out” in case nothing happens over the coming years. Buried on page 159 of his book Blood Moons: Decoding the Imminent Heavenly Signs, he states: “If nothing noteworthy happens in 2014 or 2015, it just means these are signs of things to come.”

Now, something significant may occur around the time of the tetrad—especially in the volatile region of the Middle East. If this happens, do not let anyone sway you into believing it has anything to do with the moon moving into the shadow of the Earth a few times. It does not!

Yet the Bible does have a lot to say about what the future holds for the nation of Israel and the entire world. To understand the true order of prophetic events, read the rest of the eye-opening Revelation Explained at Last! It shows with crystal clarity what God has planned for all mankind!