This website requires the use of Javascript to function correctly. Performance and usage will suffer if it remains disabled.
How to Enable Javascript
COVID Vaccines: The Mark of the Beast?

COVID Vaccines: The Mark of the Beast? 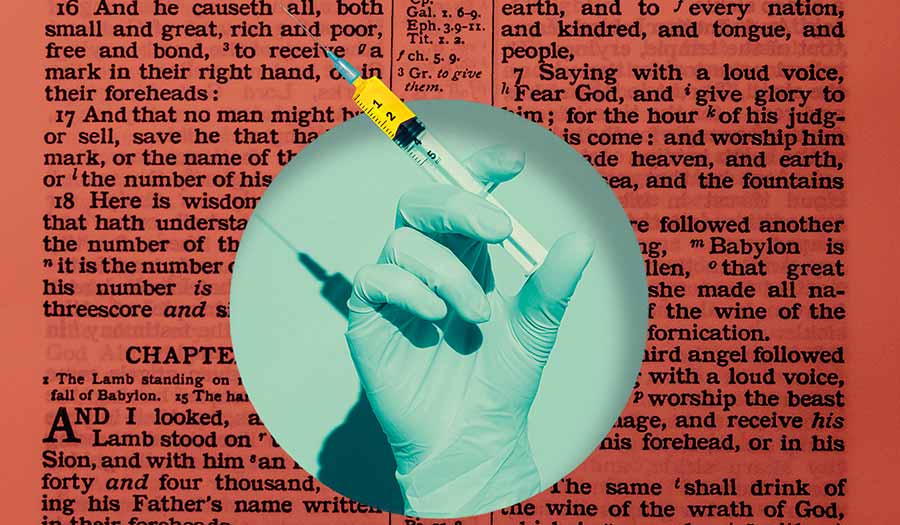 COVID-19 vaccines court much controversy. Yet some have an even greater worry—that coronavirus vaccines are the infamous mark of the beast mentioned in the book of Revelation: “And he causes all, both small and great, rich and poor, free and bond, to receive a mark in their right hand, or in their foreheads” (Rev. 13:16).

The idea here can seem to jive with coronavirus. Notice what the “mark” does: “that no man might buy or sell, save he that had the mark” (vs. 17). Vaccine mandates! Cannot shop without proof of inoculation! No jab, no job!

However, does this prophetic theory hold water?

Take a step back. Since the apostle John penned the enigmatic book of Revelation, people have had theories on what this mark is. Hitler’s swastika, microchips implanted in the wrist, barcodes and even three-digit telephone area codes have all been brought out as candidates. Of course, all these ideas have come and gone because they ignored two iron-clad rules of Bible study: Examine the context and allow the Bible to interpret itself.

God’s Word is most clear about what is involved with the mark and when it will be administered.

First, understand that the mark will not happen in a vacuum. There are other highly dramatic events that will occur at the same time.

Read earlier in Revelation 13: “And it was given unto him [the beast] to make war with the saints, and to overcome them: and power was given him over all kindreds, and tongues, and nations” (vs. 7).

This will be a figure known as “the beast” who will rule the entire world. There is another figure he works with known as the “false prophet” (13:11; 16:13). Keep reading: “And [the false prophet] does great wonders, so that he makes fire come down from heaven on the earth in the sight of men, and deceives them that dwell on the earth by the means of those miracles which he had power to do in the sight of the beast…And he causes all, both small and great, rich and poor, free and bond, to receive a mark in their right hand, or in their foreheads” (vs. 13-16).

Put this all together. This beast will have power over the entire world. The false prophet will use supernatural signs to deceive the masses. He will literally call fire down from heaven. It is in this context that the mark is brought up.

Understand. You cannot have the mark of the beast without the man known as the beast and all his trappings.

Even more, the mark is not something one can take without knowing it. This can be seen by looking at what happens to those who take it.

Revelation 14 states: “If any man worship the beast and his image, and receive his mark in his forehead, or in his hand, the same shall drink of the wine of the wrath of God, which is poured out without mixture into the cup of His indignation; and he shall be tormented with fire and brimstone…” (vs. 9-10).

Is everyone who took a coronavirus vaccine headed for God’s wrath “poured out without mixture”? Certainly not! God is a loving God who warns before punishment.

So what is this mark? As with any Bible prophecy, we must allow the Bible to interpret itself. Notice what is stated right after Revelation 14:9-10. Verse 12 begins to make clear what actions are tied to the mark: “Here is the patience of the saints: here are they that keep the commandments of God, and the faith of Jesus.”

Those who do not take the mark keep the commandments of God. Conversely, the beast will lead people to disobey God.

When the beast appears on Earth, there will be one command of God most tied to his mark: the fourth commandment to “remember the sabbath day, to keep it holy” (Ex. 20:8).

Note the importance God puts on Sabbath-keeping: “Speak you also unto the children of Israel, saying, Verily My sabbaths you shall keep: for it is a sign between Me and you throughout your generations…” (31:13).

So the Sabbath is a sign. Now look at how God describes one of the annual Sabbaths: “And it shall be for a sign unto you upon your hand, and for a memorial between your eyes…” (13:9).

Remember that the mark of the beast will be in the right arm and forehead. Similarly, God sees Sabbath-keeping as a sign—a mark of obedience—upon the hand and between the eyes.

Understand the point here. God does not physically mark those who obey the fourth commandment. The mark of the beast will not be physical either. Rather, this language symbolically shows actions (the right arm) and decisions made in the mind (the forehead).

Looking at history helps make clear what will happen when the events of Revelation 13 finally come to pass. In the book Saturday or Sunday – Which Is the Sabbath? David C. Pack says: “Now understand this most basic point. The mark is plainly identified as one pertaining to the beast. It is the ‘mark of the beast.’ Other of my books have carefully identified the beast as the Roman Empire, with much proof. This is also the Holy Roman Empire through its eight revivals, or resurrections. Therefore, the mark of the beast is the mark of the eighth and last head of the (Holy) Roman Empire.”

“Keep in mind that the Bible uses the term ‘beast’ to symbolize civil governments, while a church or religious system is often represented as a ‘woman’ (Rev. 12:13-17). The Bible does not speak of the ‘mark of the woman,’ but rather of the ‘mark of the beast’ that the woman rides. Is this clear?

So the beast will be a civil leader and the false prophet a false church leader.

Mr. Pack continued: “We can summarize in this way: This great false church steers, guides and directs—‘causes’—others to receive the mark. She does not directly administer it herself, but rather causes all in the empire to accept—‘receive’—the mark. She is the same woman that caused the martyrdom of saints throughout the ages. The mark is received in the right hand and the forehead—and it is a kind of brand of the (Holy) Roman Empire, not of the church. This mark will be brought—caused—upon the entire world!”

One final reason the mark has nothing to do with COVID-19 vaccines. Revelation 17:9-11 states: “The seven heads are seven mountains [governments], on which the woman [great false church system] sits. And there are seven kings: five are fallen, and one is, and the other is not yet come; and when he comes, he must continue a short space. And the beast that was, and is not, even he is the eighth, and is of the seven, and goes into perdition.”

Throughout history, there have been only six resurrections of this Holy Roman Empire. There is still a seventh to come before the eighth that will include the beast and false prophet.

The Bible says much more on this topic. You can more clearly understand it all by reading Revelation Explained at Last! and Saturday or Sunday – Which Is the Sabbath?